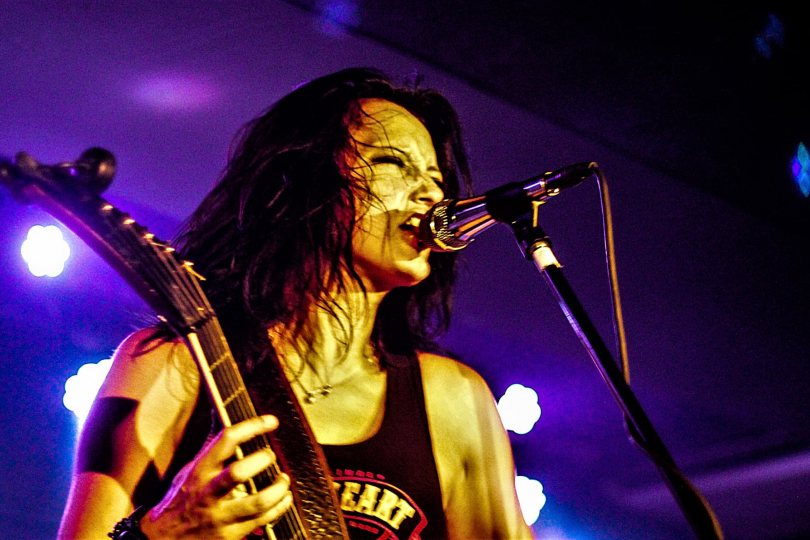 It wasn't my first time in the studio. I've experienced a lot of comfortable sofas and vocal booths, from Aquarium and Sonidos studios through Hostivař to "one" and "two" recording rooms at SONO Records. But as they say, you can always learn something new. In June our band The Agony recorded an album in a new line-up at Martin Hollander's Hollysound studio. What did I learn this time? Find out in the first part of the new series Notes of a Frontwoman.

I used to dress up for recording almost as I do for gigs because it’s important, isn’t it? But as time went on, I realized it was unnecessary. Your eyeshadow is not audible in the recording, and wearing tight jeans to look good on InstaStories probably means you feel pressed in them. So instead of concentrating on your performance, you’re dealing with discomfort, and that’s not what you need because it’s the music you’re supposed to focus on.

I decided to imitate the ambience of my study room where I record home demos—and threw on sweatpants and a T-shirt. I then spent the rest of the recording session in the "trendy outfit", concentrating just on the music and being totally comfortable.

By the way, our guitarist Petra took an example from me and did her parts in slippers, which is the coolest thing ever.

2. Guitar footrest is an excellent thing

There are more aspects when talking about comfort than just clothes. After this last studio experience, for example, I can say that for a long time, I greatly underestimated the benefit of a guitar footrest.

Most guitarists record sitting down in the studio, and to lift the guitar a little higher, they use the foot of their other leg to help them. It works for a while, but then you start to get all sorts of tingles, and it’s neither great for your back nor your hands. And they are quite important when recording a guitar part.

Under Holly’s desk, I spotted an abandoned guitar rest that I had borrowed, and recording guitar tracks was suddenly a little more comfortable and easier again. I’m definitely going to get one for home.

As we know, time is a crucial variable in studio work. Much has already been said about how it pays to save every precious minute with consistent preparation ahead. We all know that we have to change strings, decide and rehearse our parts, and have the arrangement fine-tuned before we get to the studio.

But if the time comes, it’s also essential to be able to say during the recording session that you’re not going to finish it today and you’ll continue tomorrow. Of course, we are not talking about having done twenty per cent of the work. But in a situation where everything is going according to plan, and you’re struggling with a nearly finished piece, it’s okay to say you’re tired and you know you’d do better the next day.

We’re still humans, and performing music in the studio is about giving your ideal performance in the allotted time window, which isn’t fun. So if it’s evening, you’re exhausted and unable to play your part, or you’re sick of it all, don’t force it. It would be counterproductive—you wouldn’t play it to the best of your abilities, and you’d waste time redoing it in the morning. Have self-reflection and enough judgement though, and start the next day’s session maybe an hour earlier, with renewed energy and a clear head.

4. Gigs and recordings are different things

Logically, the studio won’t forgive you as much as the stage. Actually, it will never forgive you anything. Play a wrong chord during a live performance, and it’s likely to get lost in all the “mess”, whereas sensitive studio microphones will pick up any inaccuracy.

Intonation is no big deal—if you play or sing falsely, you hear it and correct it. But working with dynamics, for example, can’t be done in one session, you have to know how to do that. It took me a long time to learn that I just can’t bang the guitar that much in the studio. It makes the whole track inaccurate and out of tune—and then sulky, too, because I have to play it again, and it doesn’t sound good in the final mix anyway.

So I went for the “less is more” tactics, even when arranging the rhythm guitars in the studio. Where a few years ago I would have layered one exactly the same picking pattern after another, today I know that guitars should be and should complement each other rather than overwhelming one another. Where I would have played identical chords in three different tracks, today I know better to play one track with power chords, another with open chords, and another with octaves. Don’t be afraid of chordal turns, support the chords, even if only with their fundamental notes, when needed.

All of this creates a massiveness and gives space for different frequencies to ring out, not beat against each other. And speaking of frequencies, it’s also why I know now that I don’t always have to play all the notes in a chord—that in some tracks, it’s better to play only a part of the chord so that exactly what’s needed there gets into the mix and the rest doesn’t get in the way. Because a muddled mix is a “big bad”.

5. Do not underestimate food

Food is often underestimated, unlike changing strings, but trust me: no one can ever play their parts a hundred per cent with a growling stomach. And I’ve never seen a good hungry singer in my life. It doesn’t seem like it, but even working in the studio is a bit of a sport, and you need energy for it. Plus, a full stomach contributes to mental well-being, which is pretty important in the studio. So find out ahead where you can eat well around the studio or if there’s at least a delivery service. And if not, bring your food from home and buy supplies.

Then, when indulging in delicious burgers between songs, don’t forget to send a video to your drummer (who is not there because she recorded her parts a month ago) and share your gastro-pleasure.

Tagy Notes of a Frontwoman recording in a studio

Frontwoman of the all-female heavy rock band The Agony. Once a student of journalism at FSV UK, now a woman in IT Service Delivery. She loves good coffee, cold Pilsner, sarcastic lyrics, good riffs, enthusiastic female musicians and…
RELATED ARTICLES

Notes of a Frontwoman #3: Potemkin Villages of Half-Playbacks

Notes of a Frontwoman #2: "I'll Do It Myself" or Releasing a Single from A to Z
most read news