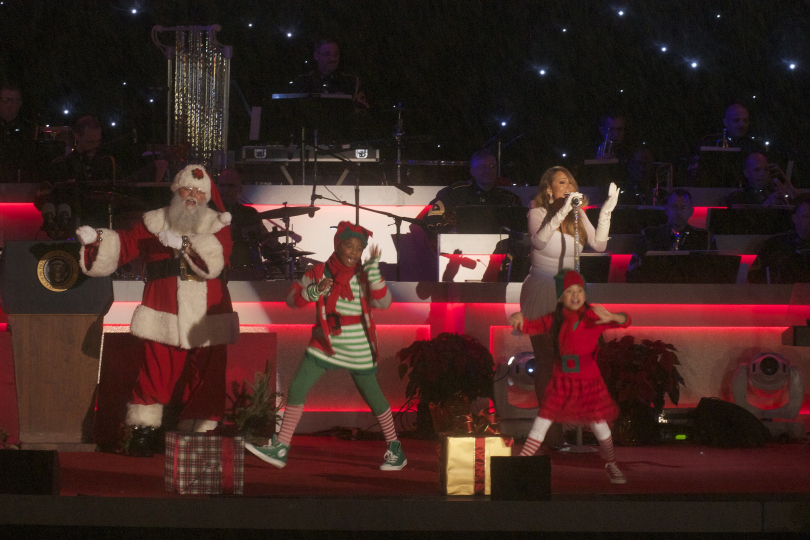 In its essence it's simple but sophisticated, borrowing influences from many corners of popular music. | Photo: United States Army Band (CC BY 2.0)
Kieren Alexander - Thu, December 22, 2022 - 08:00

Story of a Hit Xmas Special: "All I Want for Christmas is You"

It's that time of the year again when the radio waves and shopping centres become inundated by the cheery tones of Christmas tunes. So we couldn't resist the temptation to jump on board and talk about one of the newer entries in the Christmas song pantheon, the jingly genre-defying modern classic by Mariah Carey.

In 1994 Carey and her then song-writing partner Walter Afanasieff sat down to write for her upcoming album Merry Christmas. In supposedly 15 minutes, they had nutted out what today is one of the most well-known songs of the season. That's right, in only 15 minutes, they had managed to put together the chord progression and melody, a combo that is so catchy that just thinking about it can bury the worm firmly into your ears. It's hard to believe that something so catchy can have been put together so quickly – but that's its secret – in its essence, it's simple but sophisticated, borrowing influences from many corners of popular music.

Snow, Santa and The Ronettes

First of all, let's talk about this wonderfully down-to-earth video clip that accompanied it when it was first released in 1994, currently sitting at about 750 million views on YouTube. It was shot by Carey herself, using super-8 film, and it's made to look like a home video. And it is almost literally that, down to the cameo appearance of her then-husband Tommy Mottola as Santa Claus.

But it wasn't the only video released in 1994, there was also a black and white stylised version, inspired by the 1960s girl group The Ronettes. It was also directed by Carey and features backup singers, go-go dancers, hairdos and all! This one is not nearly as well known as the home-video clip, and watching it today, in all its retro glory, you can't help but think, "how can a Christmas song not even have a single Christmas bauble?"

A potpourri of influences

But this clip really helps us see some of the underlining influences in "All I Want for Christmas" and alludes to the mish-mash of styles that inspired it, which I think, in turn, contributed to its hit status. First of all, it makes a fitting tribute to an essential era in the evolution of popular music, the 60s. Secondly, it draws our attention to the three backing vocals, which, although subtle, really carry the song along and are obvious influences from blues and R&B, genres that are cornerstones in American music.

However, it's Mariah Carey's voice and performance that really gives it that tinge. Her impeccable style and technique, those melismas and that tone are all influenced by R&B. And this might well be one of the reasons the song has become a Christmas classic. According to Vox's (somewhat one-sided) video on what makes a Christmas song, Carey's song is a tribute to the famous Christmas album by Phil Spector, especially Darlene Love's rendition of "Christmas (Baby Please Come Home)".

Released in 1963, it is arguably one of the most important Christmas albums of history, and its influence on the "sound" of Christmas has lingered. Phil Spector was an influential producer, especially throughout the 60s and 70s, having worked with the Beatles, Tina Turner and many others, and his signature production style – his "wall of sound" – is present throughout it.

"All I Want for Christmas" mimics the saturated sound of Spector, by filling in all the space, with its backing vocals, sleighbells and orchestral hits. Listen to that driving bass line, rocking every beat. And don't ask me what's going on with the piano – endless triplets, actually creating a two-against-three cross-rhythm – it seems almost nonsensically unplayable. And that's just the thing, apparently, the entire track, as we know it, was not performed by musicians at all but programmed by the co-writer Afanasieff.

So if at this point you're feeling a bit over Christmased, and you need a break from these jingly overproduced sounds – well, you just need to check out this 2009 funky remix.

The last aspect of this song that I think deserves attention, is its delicious chord progression. In this department, "All I Want for Christmas" is more closely related to the standards of the Great American Songbook than other hits of its decade. The show tunes and jazz numbers of the early 20th century were adventurous with their chords and progressions, and I think it is an essential part of what has made Carey's hit so successful.

The progression makes strong use of the minor subdominant, that is, in the key of G major, the use of the Cm chord (music nerd alert for this next bit). We hear it immediately in the verse, reoccurring at the end of every 8-bar cycle. That bittersweet sound, landing under the words "underneath the Christmas tree", is extra emphasised by the backup singers, who are actually singing the Eb in that Cm chord.

In the repeating melodic phrase "I just want you for my own" and "more than you could ever know", the words "own" and "know" land on that very same Eb. However, the chords underneath are shifting – the progression here is G / B7 / Em / Cm – "own" lands on the third of the B7, and "know" lands on the third of the Cm, but both notes are that very same Eb. If you've been following previous episodes of our series, you might recognise this most of this chord progression from another hit, that is, "Creep" by Radiohead. So it's no surprise that the internet has already come up with that mash-up.

But the icing on the cake is the following line "Make my wish come true". That last word sits on the augmented 5th of the chord (a C note on an E7 chord), giving it a powerful bluesy sound. The combination of the lyrics, with the bluesy dissonances created by the melody notes and chords below them, well, it's an example of great songwriting.

So there you have it: there are just so many reasons that make "All I Want for Christmas" the hit that it is today. Whether it's the multitude of musical influences, Carey's terrific voice, or the clever songwriting, I think it deserves its place as a Christmas standard – even if it is getting a bit tiresome to listen to (and it's not even Christmas yet). Well, maybe next time you're bombarded by it this holiday season, you can listen to it in a new way.

I'll leave you with the eloquent words of Adam Neely: "All I Want for Christmas is a wonderful synthesis of three separate styles of American popular song: the lush, evocative harmony of Irving Berlin, the maximalist and invigorating production of Phil Spector and the exciting fireworks of the R&B tinged vocal performance of Mariah Carey."

What do you think, does it deserve its place as a Christmas standard? What's your favourite Christmas hit?

Leave your opinion in the comments below!

Story of a Hit #3: "Smells Like Teen Spirit"
most read news