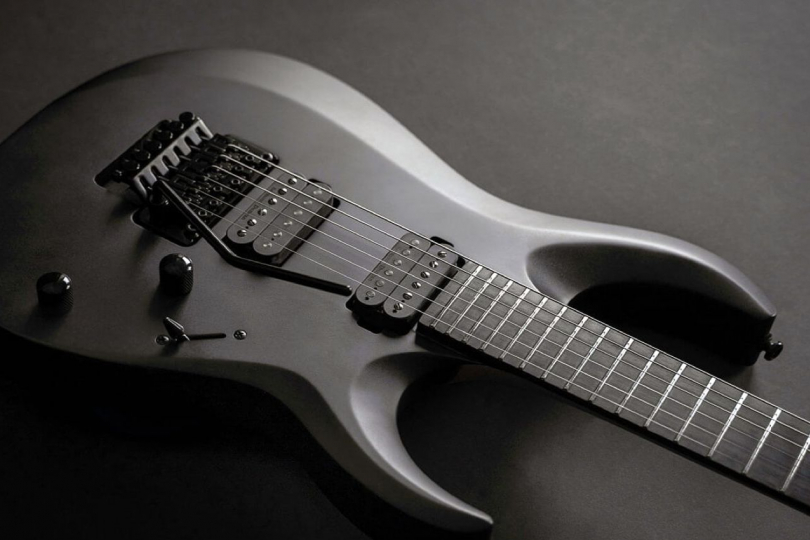 Korean Cort has added a new six-string guitar model to its X series collection: the X500 Menace, another variation on the modern superstrat heading into heavy metal waters. This is matched by aggressive body contours, reminiscent of the Ibanez RGD series combined with Solar guitars, a variable fingerboard radius, Floyd Rose tremolo, and, last but not least, quality Seymour Duncan humbuckers with a powerful output capable of properly feeding the amp's input circuits.

The base consists of a through neck glued together from seven layers of maple, purpleheart, and panga panga, to which mahogany body wings are attached, and a maple top adds a good portion of upper frequencies to the sound. The ebony fingerboard, into which 24 solid jumbo frets are set, has a variable radius of 12 to 16 inches, and orientation is facilitated by dot markers set into the fingerboard edge.

Dive-bombing and other tone-bending techniques are provided by a Floyd Rose 1000 double-locking vibrato with a bolt-on shaft and 43-metre-wide zero-fret locks; the reverse-situated headstock is fitted with the company's tuning machines, which, like the rest of the hardware, are finished in black chrome.

Extra attention was also paid to the electronics, consisting of a supercharged Seymour Duncan Nazgul bridge trembucker, equipped with a large ceramic magnet, and a Seymour Duncan Sentient neck with a balanced character capable of reproducing both clean registers and high-gain solos in detail. The pickups are controlled by volume potentiometers plus a tone pot with Mylar capacitor and a three-position footswitch.

The Superstrat X500 Menace, which Cort first introduced earlier this year but is only now making its way into worldwide distribution, is available in a stylish Satin Black matte finish and factory-tuned to D'Addario EXL120 "nine" strings. The official price on the European market is around €950.00.