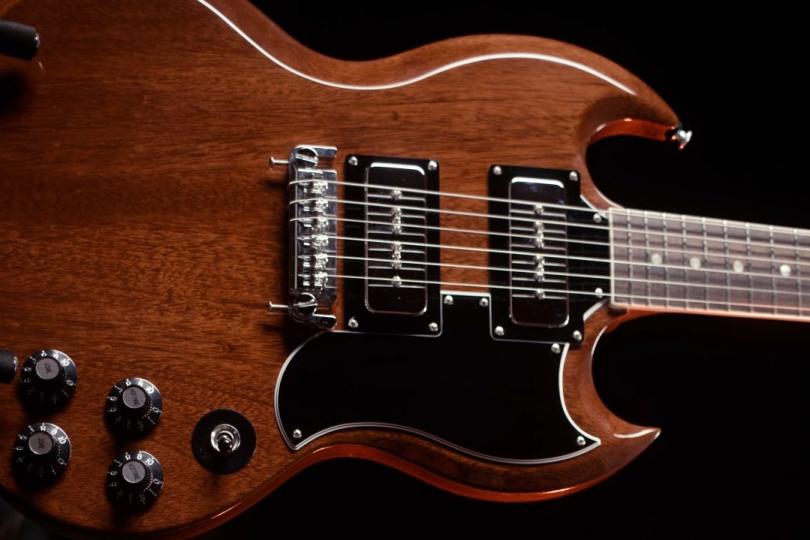 After the limited relic series of the Tony Iommi "Monkey" SG from the Gibson Custom Shop, the Nashville brand introduces another guitar model associated with the founding member of the legendary Black Sabbath. Dubbed the Gibson Tony Iommi Signature SG Special, the instrument is a more standard-looking variant based on Iommi's vintage 1964 Gibson SG, which was an integral part of the British band's sound that defined the musical pillars of the later heavy metal scene in the 1970s.

A neck with a slightly rounded profile and made of select light mahogany is glued to a body made of of the same material. Indian rosewood was used for the 12-inch radius fingerboard with 22 medium jumbo frets, acrylic position markers, white edge binding, and a 43 mm wide GraphTech nut.

The hardware consists of a simple but fully adjustable wraparound bridge, the headstock features reliable Grover Rotomatic tuning machines, and the front strap button has been moved from the back of the body to the upper horn of the body, as per the prototype. This solution optimizes the balance of the instrument and also partially eliminates the guitar from falling over in the direction of the headstock.

The black plastic frames house two Gibson P-90 pickups in chrome-plated metal enclosures. Featuring higher output and a more massive tone with rounder highs compared to conventional single-coil pickups, the single coils are controlled by a three-position switch, independent volume, and tone pots with Orange Drop capacitors. The potentiometers have been given stylish Witch Hats and a black pickguard completes the overall design of the guitar.

The Gibson Tony Iommi Signature SG Special comes in a timeless Vintage Cherry transparent finish with a final nitrocellulose lacquer, includes a hard case and, among other things, the "Monkey" sticker that adorns Iommi's modified 1960s original. The official price of the model, which is also offered in a left-handed version, is around €2,400 for the European market.