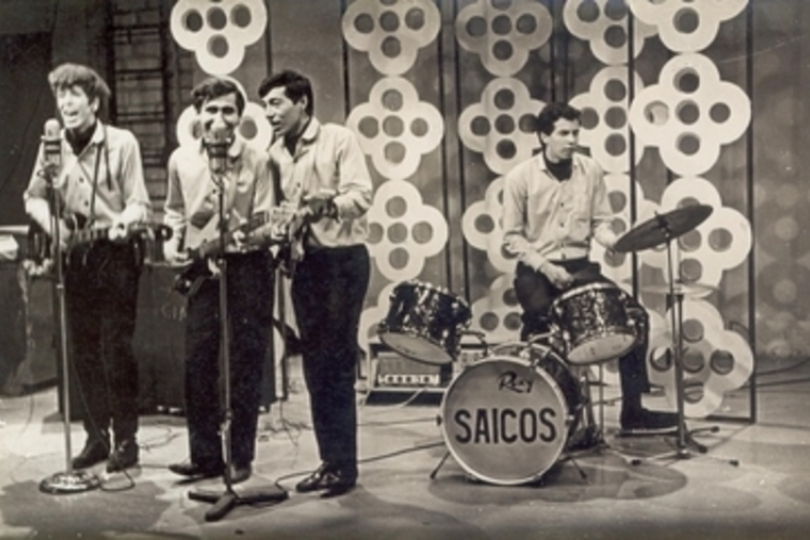 Brian Jones with his Rolling Stones marked an important turn in the history of 60s music. But at the time, rhythm and blues as well as rock and roll were spreading not only through the USA. In Latin America, Peru was also following this wave and surfing the highest peaks of it, doing pipelines and all. Surf rock and also Merseybeat—the latter being a popular British genre born around that time in Liverpool—were spreading in the land of the Incas and the first Peruvian rock and roll bands started to appear. But the real revolution happened when the influences coming from the States were completely absorbed into the Peruvian musical tissue and transformed into a completely new and revolutionary shape. The joyous scream of rebellion and happiness, while destroying cars. In a word: Los Saicos.

By the end of the 50s, probably everybody had listened to Elvis Presley and The Beatles. In Peru as well. Rock and roll had surely marked the beginning of a new musical era because it embodied the dynamicity and the vitality of the new generation. But in Peru at that time music was also an expression of rebellion. In the first years that rock and roll landed in the country, the first local rock bands also appeared: Los Millonarios del Jazz and Los Zodiac, among others. It is in this period that "Los Sádicos" gets shape.

The band was formed in 1964 in Lima. They soon changed the name from Sádicos to Saicos, which they preferred particularly for the reference to the famous Hitchcock movie, but the name also resembled the battery-powered Seiko watch. The first members were Erwin Flores (singer and guitarist) and the drummer Francisco Guevara. Eventually, they both asked the guitarist Roland "El Chino" Carpio, who previously played in the band Los Steivos, to join. Ultimately, they also included César "Papi" Castrillón, and they taught him how to play the bass. Depending on the mood of the song and the type of voice needed Erwin Flores and "Papi" Castrillón would usually switch between the main vocal lead; Flores called for the rough and rocky parts and Papi instead led the more melodic pieces.

They started playing in local venues, even having the occasion to exhibit on big stages, for example their performance at the Tauro Cinema. In 1965 their popularity grew exponentially, and they appeared on a very popular TV show of the time El Show del Diana, on Channel 9. It is in the same year that the DisPerú label offered them a contract and the band immediately released the singles Come On and Ana. Both songs are about love, and they somehow reflect the duality of the band. Ana, sung by Papi, is a confession of romantic love and natural desire to possess a significant other; Come On, sung by Flores, on the other hand, represents the explicit declaration that wanting is power, and that in love, this is everything: "Baby come on to me/ 'Cause I want/ To have you near me/ I'm in love/ In love with you/ And your sister too," or in life " 'Cause I am/ The king of the street/ And I can/ Get all I want."

In the very same year, in May, the band released another single, Demolición, which immediately became a huge hit (to the point that the company Johnson & Johnson re-recorded the song as a jingle with a children’s chorus, for a shampoo advertisement). The song narrates a "funny" idea of demolishing a railway station and bombing it. A symbol of fanatic rebellion, but it is also the first appearance of a new spirit in music. The lyrics, accompanied by rough and croaking vocals, combined with how the instruments are played and the rawness of the record itself, makes us think that we are in listening to the first punk band in the history of music. The band acquired more and more success, they played at Salazar Park, in Miraflores, and afterwards at the Orquesta de Los Hermanos Silva. But the feeling among audiences was always mixed. They were either loved or hated. The drummer recalls how, in some gigs, the audience was very interested to hear the band and thus stood very close to them, but when they started playing, they got scared and moved away, especially when they heard the animal voice of Erwin.

Still, in 1965, the band released other songs, like Cementerio, El entierro de los gatos (a song about the burial of cats) and Camisa de fuerza. The roughness of their attitude was counterbalanced by the irony of their lyrics and the playful, dispassionate attitude of the group. At the beginning of 1966 something changed, when the record company IEMPSA announced the group would be signing with them—while a famous label, they also had very little experience in rock music. Two songs came out from the deal, Besando a otra and Intensamente. The first song, initially with Papi on vocals, had to eventually be re-recorded by Erwin, who tried to imitate Papi's voice. The second track, instead, was finally only performed by Guevara and Flores.

Clearly, something wrong was happening. The band slowly started to fall apart, as each one of the members had other interests apart from music, and they seemed to be not as united as before. A promoter's offer to do a one-year tour around Central and Latin America was never answered. The demands of the label to record more singles and EPs were not met, and the members started to slowly follow their own paths. Maybe the reason was that they couldn't get along together anymore. Or that all the fame and success was just too much for them. We don't know.

What we know with certainty is that Los Saicos marked—even in their very short history and with few songs published—a fundamental turning point in music history. Rock and roll has naturally given birth to new genres and subgenres, but the exact moment in which rock got "dirty," and slowly evolved into what will be classified as "punk," started right here in Peru, in 1965. A glimpse of rebellion, which created a whole new musical path, whose legacy survives to this day: just think of Iggy Pop, Germs, Fear, and many others deeply influenced by the rough and animal sounds of Los Saicos. Also, of course, one of the most transgressive and deranged bands in the history of music, the band who took rock and punk and made a psych-rockabilly bath of blood: The Cramps, who will be protagonists of our next episode of "Milestones."

How do you think Los Saicos shaped the sounds of punk and garage music? Were Los Saicos really ahead of their time, to be considered the pioneers of punk, or proto-punk? Is punk really dead today?

Milestones in Music History #19: The Strokes, a New Indie Era