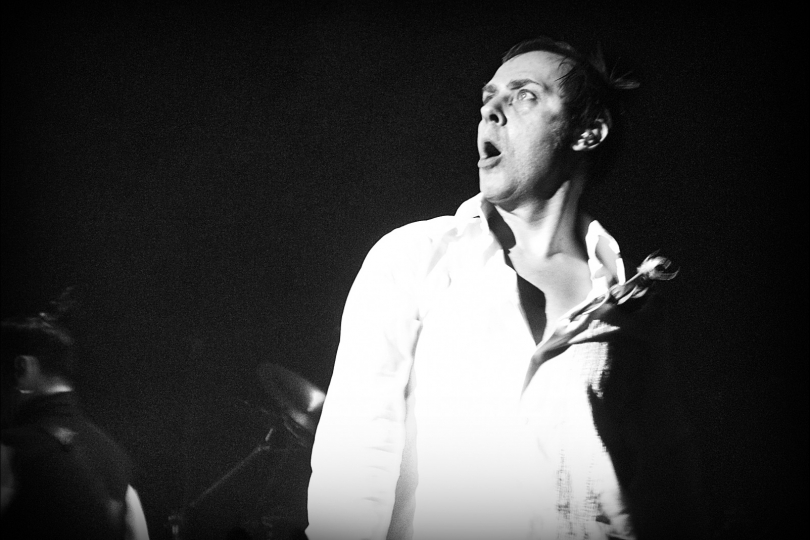 Rockabilly and psychobilly contributed greatly to shaping the sound of the 80s, but they also underlined the contrast between popular and alternative music. Psychobilly, together with punk, put emphasis on the underground world, on the world of rejects and misfits. Music at the end of the 70s began to speak to the forgotten, to the rebellious minds that could not cope with disco music and other music of the masses. But to take that trip downward took some sensibility and courage, and it required a move away from the spotlight. A new awareness was needed, and thus music became an instrument of the exhibition of obsessions and contradictions of the soul. We needed new prophets, a little darker and more enigmatic, but always glamorous. A band decided to carry the banner of this new movement. We are talking about Bauhaus.

The famous art school, Staatliches Bauhaus, was born in 1919 and founded in Weimar by the architect Walter Gropius with the idea of establishing a new conception of art—involving and putting together different forms of artworks into one single system (Gesamtkunstwerk). The idea was revolutionary, as before that every single art form was established independently, and assuming honourable status per se, without being contaminated by other art fields. Before Bauhaus, the idea was to preserve and endure, sticking to the old laws and aesthetic regulations. This new movement changed everything, as art now became functional, while at the same time holding high the concept of beauty. It was a game-changer, and in the relatively short history of the movement (Bauhaus was operational until 1933), shook up the artistic paradigm and influenced modern architecture and design, until today.

The style and conceptualism Bauhaus promoted was the reason why David J. Haskins decided to use the name Bauhaus 1919 for his band. He had played in several bands, together with his younger brother Kevin and Daniel Ash, who tried repeatedly to convince Peter Murphy to join them. When in the end he decided to do so, the song “In the Flat Field” was born.

Bauhaus 1919 played their first gig in Wellingborough on New Year's Eve 1978, at the Cromwell pub. Apart from the direct reference to the artistic and architectural movement in their name, the band also started using as their logo the emblem of the famous art school, which they included in posters and ads to promote their concerts: a dark typeface, which somehow showed a vague idea of their music and genre. After only six weeks spent together, they went to a studio to record their first debut single. A quite singular hit, as the song, released then in 1979, was more than nine minutes long. Now called only Bauhaus, the band thus gave birth to their famous (and in my opinion spectacular) “Bela Lugosi’s Dead.”

Their first song was recorded in only one take, with Murphy sick with a cold while recording the track—it was also his first time ever recording his voice in a studio. It can be considered the band’s manifest: echoes and delays, reverberating guitars and a touch of reggae and dub, two genres that deeply influenced them. While the drum style was inspired by bossa nova rhythms, the most striking and distinctive element was the explicit reference to Bela Lugosi. Lugosi was the Hungarian actor who impersonated Dracula in the homonym film of 1931, directed and co-produced by Tod Browning from a screenplay written by Garrett Fort. The reference to horror and darkness, to a more obscure side of things, gave Bauhaus the goth label. The band’s affection for gloomy sounds and atmospheres is undeniable—NME described their first album In the Flat Field as "Gothick-Romantick pseudo-decadence." There was rebellion in their music style, however, unlike what we have seen with The Cramps and punk, this revolt was rather inward. A hidden scream, an introspective war. And here we can also see the first seeds of post-punk, growing patiently and wisely, in the dark.

However the band never enjoyed this “goth” etiquette, which they never used for describing themselves. Bauhaus always preferred to label their style more as “dark glam,” but the undeniable success that “Bela Lugosi’s Dead” had reached, together with their dark visual and musical style, gave the band a goth mantle.

After the popularity Bauhaus achieved with both their first album and the vampiresque hit single, the band departed for a tour in the US in the summer of 1980 and returned to England in October for a UK and Europe tour. At the end of the year, the band released what I would describe as “psychobilly meets post-punk meets glam rock,” the T-Rex cover song “Telegram Sam.” Issuing such a song would enforce the signature of “dark glam” and confirm the specific sound of the band. It is dark... yet it glitters. And as Ash stated, his guitar riff was rooted in some Gary Glitter songs. The glam was in their blood, and it defined their style, as this apparently weird combination of horror and sequins gave birth to something completely unheard of before.

One year after the band signed on the Beggars Banquet Records, they published the singles "Kick in the Eye" and "The Passion of Lovers," before releasing their second album Mask, which was probably a little bit more digestible and “poppy.” In 1982 they recorded their third album The Sky's Gone Out and released the cover of the famous David Bowie hit “Ziggy Stardust,” granting them incredible fame and media appearances. But things started to get sour among members of the band, and combined with Murphy’s pneumonia right before recording their fourth album Burning from the Inside, which caused him to not participate much on the record, made things more difficult. Therefore, during the promotional tour of the album, before playing at Hammersmith Palais in London, the band decided to break up, and thus played their farewell show in that venue.

But we know vampires don’t die just like that, they keep crawling in the dark. Bauhaus reunited again in 1998 for their “Resurrection Tour” (of course), and in 2008 they released their new studio album Go Away White, which was their last. Even though some rumours talk about fights during the recording, Murphy described the work as spontaneous and containing positive and playful vibes. In these past years, the band appeared together at some gigs and finally in March of this year Bauhaus released the song “Drink the New Wine,” recorded using the Exquisite Corpse method, where artists play without hearing what the others have played.

Maybe goth (maybe not), Bauhaus defined and marked an important milestone in the history of music. Their experimentation of sounds, the combination of different genres, and different forms of art, all in one single concept, the same idea Walter Gropius had conceptualised and put in work for his art school—Gesamtkunstwerk, but dark and glittered. Bauhaus created on one side a huge goth subculture, but they also favoured the birth of indie and post-punk and therefore were also appreciated by rock listeners. Many bands such as Nine Inch Nails, Mark Lanegan, The Smashing Pumpkins, Massive Attack, Courtney Taylor-Taylor, Jane's Addiction and others recognise the influence of Bauhaus, and their songs have been covered by many acts over the years. If the band traced a darker sign onto souls, their subversion was perceived exactly at the same time by some other angry and subversive lads called Hüsker Dü, who will be our focus in the next Milestones

What makes a musical composition “dark”? How can architecture and other forms of visual art shape into music? How could Bauhaus as a concept and musical expression take place today? How do you think Bauhaus have changed our music world?

Milestones in Music History #15: The Cramps and the Birth of Psychobilly

Milestones in Music History #12: The Rise and Fall of Brian Jones
most read news