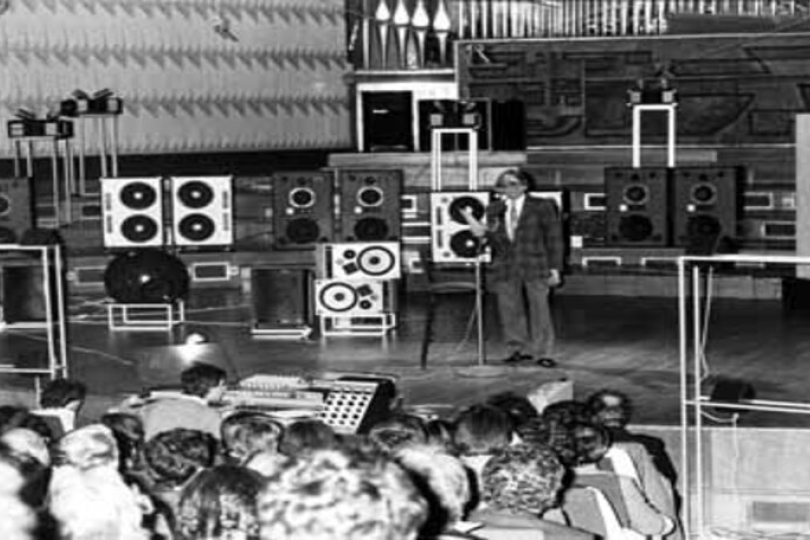 Milestones in Music History #22: The Birth of the So-Called Musique Concrète

The beginning of the 20th century saw the birth of many strange and interesting music machines. Those monstrous devices, which caused awe and even a little bit of fear for the attending public, were the result of the careful study of soundwaves, and the attempt to create a new way of experimenting and experiencing music.

We cannot establish with certainty that Václav Prokop Diviš, the protagonist of our last Milestone, really did invent the first electronic instrument, but it is sure that he was aiming in that direction. The idea to combine electricity with sound existed already back then, but it became a reality only at the beginning of the twentieth century. The first experiments on soundwaves and on the modification of natural sounds gave way to a new sentiment, a completely new approach to music, which influenced generations to come. The first proper electronic instruments, built not for sale but solely for public display and general demonstrations, drew a line connecting the classical composition of the 17th, 18th and 19th centuries with the needs born from the technological development of the new century. The beginning of the 20th century was a fertile and stimulating moment, in which science and music went hand in hand, almost merging in unison as if it were a choir; an overwhelming and disruptive chorus which, however, had surprising historical implications and to which we still refer today. The modern world needed "concrete" sounds, and music—along with musicians, of course—responded properly.

One of the earliest innovations in the field, with the exception of Prokop's amazing and controversial invention, is represented by Matthäus Hipp’s Electro-Mechanical Piano, described by the author himself in the 1867 edition of the Polytechnisches Journal. This clavier combined watch mechanics, electro-magnetism and telegraphy. Music was "written" on a paper roll, which had perforations according to different pitch and lengths, and a separate track for volume.

But the real revolution happened at the beginning of the 20th century. Leon Theremin built an instrument, called namely the "Theremin", where sound was created through electronic oscillators. It was the first instrument to be played "contactless", as spatial waves generated with the movement of hands in the air interfered with the electric field, and thus produced sounds.

During the 1920s, many other musical experiments were made, following the Theremin, about which we unfortunately do not have space to talk about here; we could mention, at least, the Ondes Martenot, the Sphäraphon and the Neo Violena. However, another revolution happened regarding both the perception and production of music itself. At the end of the 20s, a work published by André Cœuroy, called Panorama of Contemporary Music, focused on the production of music that could be reproduced through gramophones.

This concept was underlined and made more poignant in 1930 by the composer Igor Stravinsky when he predicted the production of a type of music, characteristic of a gramophone record. Some time afterwards, when the interest in recording natural sounds became more poignant, Rudolf Arnheim, in an essay called Radio from 1936, also wrote about microphonic recording.

But everything started to take shape in 1942, when Pierre Schaeffer, French composer, musicologist and acoustician, together with Jacques Copeau, French theatre director, producer, actor, and dramatist, founded the Studio d'Essai. During World War II it represented the Resistance movement, broadcasting during the last years of the war and later becoming a centre of musical activity.

It is in this context that Schaeffer started his research on sound, in particular, experimenting with sound manipulation techniques, and he kept journals which would describe his main goal: the creation of a "symphony of noises".

The term musique concrète was born from the collection of those journals, published in 1952, with the title A la recherche d'une musique concrète. Schaeffer’s study involved electroacoustic and acousmatic music. In simple terms, his method consisted of using acoustic sounds and manipulating them, sometimes through audio signal processing on acoustic instruments; the resulting composition was then presented using speakers, instead of through a live performance.

Schaeffer was deeply influenced by cinema, and from this visual-audio form of art, he took the techniques of recording and montage. For the sound recording method and his approach to the study of sounds, he was probably influenced by Jean Epstein, French filmmaker and film theorist who shortly before him saw the importance of manipulation of natural sounds, and who also put a focus on cinematographic music.

While Schaeffer was conducting his experiments in sound manipulation, Egyptian composer Halim El-Dabh at the beginning of 1940 started music experimentation with tape music, through the use of a cumbersome wire recorder. Halim El-Dabh recorded an ancient zaar ceremony and then he processed the material using reverberation, echo and re-recording. The Expression of Zaar was presented in 1944.

Two years later, in 1946, the Studio d'Essai changed its name to Club d'Essai de la Radiodiffusion-Télévision Française, and in the same year Schaeffer presented the results of his studies on sound manipulation, and the way time is perceived in music composition. In 1948, he showed his results at a concert held in Paris, of five studies for the phonograph, his wonderful Cinq études de bruits (Five Studies of Noises).

Even today the five studies appear avant-garde and incredibly innovative: the "natural" sound of trains, in Étude aux chemins de fer, which is reproduced and remixed, with a formidable mashup technique; the sound of toys and percussion instruments, manipulated and reworked, in Étude aux tourniquets; the variations and sound manipulations of the piano recordings in Étude violette and Étude noire; the sound and fragmented game of pans, boats, looping voices spoken and sung, interspersed with piano and harmonica, in Étude pathétique. It is a truly shocking work, and one that mentally projects us into the future, the future that is yet to come.

The year after saw the publication of his recherche (mentioned above) and it definitively labelled his music compositions and method of perceiving sounds. His approach to music was original, "modern" and ingenious—his manipulation of sounds found in nature, natural or artificial. Schaeffer with his musique concrète shaped the sound of our contemporary world, and he went beyond even that.

The legacy Schaeffer and his Groupe de Recherches de Musique Concrète left is enormous; many artists are indebted to Schaeffer and his musical method. Apart from his own pupils—among the most notable is probably Jean-Michel Jarre, who dedicated his work Oxygene 7-13 to Pierre Schaeffer—are also unsuspected contemporary rap artists, such as Public Enemy (in It Takes A Nation of Millions To Hold Us Back) and De La Soul (for example the record 3 Feet High And Rising), who in their works have reused everyday sounds and adapted it to their works. The very same innovative spirit and original approach to sound is found in the genius of Raymond Scott, the protagonist of our next Milestone.

Is music supposed to be a faithful image of nature, or can it be a crooked reflection of it? Did Schaeffer invent a new way of producing and performing music? Is musical performance only the act of playing live, or can it also be a mere reproduction of sounds from speakers? Is contemporary music connected to the musique concrète? And what is the future of sound manipulation?