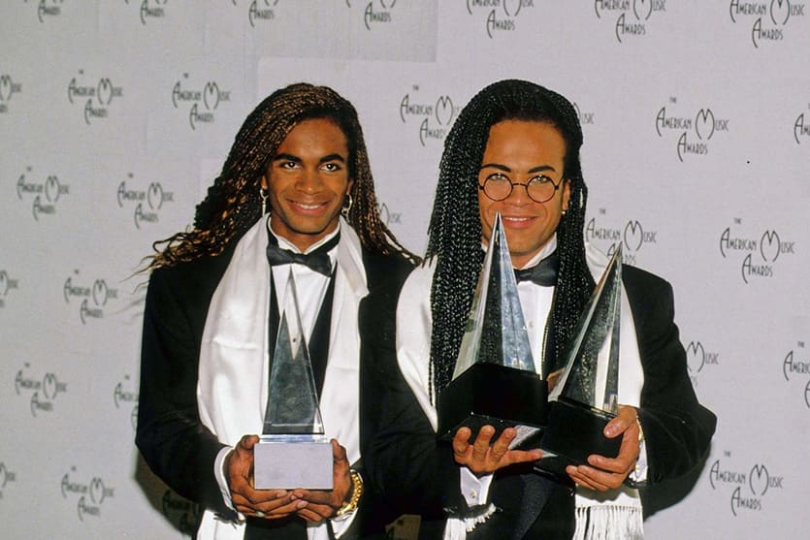 Milli Vanilli took it to the extreme in the nineties with a shameless complete playback where they didn't even sing. | Photo: Globe Photos / Mediapunch / Shutterstock
Nikola Kandoussi - Fri, September 02, 2022 - 08:00

Notes of a Frontwoman #3: Potemkin Villages of Half-Playbacks

Gone are the days when concert audiences didn't get a chance to hear anything musicians didn't play live. As technology advanced, musicians have adapted and learned to use it to bring the sound of studio recordings onto the stage. The original idea was understandable: for their money, listeners deserve an experience which is similar to what they are used to from the records. However, some artists in certain genres have gotten a bit out of hand. So in recent years, I've been asking myself when half-playback is forgivable and when it's too much. And where is the line between a bonus and cheating?

Let's face it: yes, it's 2022, it’s a different era. Modern metal is dominated by samples, trap beats and multiscale guitars downtuned to... incomprehensible depths. Considering my "year of release"— 1993, I don't regard myself as a boomer and I really like some representatives of the genre. However, this musical evolution leads to the frequent belief that anything played without samples is old-school.

Yet, creating a full sound without artificially added layers is not easy. It takes a certain instrumental skill, great rhythm and arrangements that fill the sonic space (or you can just blast it like Motörhead and play with such speed, volume and energy that it runs you over like a steamroller).

Let's get the terminology straight. One thing is samples, or pre-recorded tracks of synths, sound effects and instruments that are not usually present in the band. That's understandable within reason. But then there are downright half-playbacks, or auxiliary backing guitars, vocals and, heaven forbid, solos, bass and drums. Basically, what the musicians could play or sing by themselves. But for some reason, they can't or won't.

The quality of studio recordings is going up all the time and the studio makes incredible things possible. Guitarists can record ninety guitar tracks, the whole thing grooves great and it makes everyone's headphones fall off their heads with sheer joy. But then they come into the rehearsal room and find that with just their own hands and two guitars instead of ninety, it doesn't work; it sounds empty. Or even worse, without the possibility to play the track in small parts and on multiple takes, they can't actually play it.

At that point, the musicians have two options—either to rearrange the song and practice in a way that makes it playable or to use the help of pre-recorded tracks. More and more musicians are choosing the latter; and if they admit to using the backstage assistance at all, they justify it by saying that the tracks are there to make it sounds better on stage and we should give the listener the best experience possible.

Everyone has a different opinion on this topic and I am very curious to hear yours. I think that (as always and in everything) it's all about the appropriate amount—samples or pre-recorded tracks are fine up to the point where the song would still sound and could be played perfectly without them. In other words, as long as it's a few tasteful "decorations on the cake" while the cake would still be tasty on its own. I think it's bad when anything pre-recorded covers up the emptiness of the song, the instrumental imperfections of the musicians, or the bad coordination of the band.

Everyone understands that musicians are just people and sometimes they have bad days and make mistakes. But using playback almost exclusively to make it sound great every time is a scam and it sucks. Plus, playing with auxiliary tracks isn't that easy. Firstly, the drums have to play exactly according to the metronome; secondly, as it happens, the technology sometimes fails and reveals the unpleasant reality and drowns the musicians in bottomless shame.

This happened to Santa Cruz who quite recently embarrassed themselves immensely when it turned out that they were playing almost a complete song on playback. Lordi also experienced a monstrous failure, although supposedly it was not their fault. They said that they were forced by a Russian production to playback with a CD that got stuck during a TV show. Even my beloved KISS had a lot of explaining to do when it turned out that Paul Stanley's worn-out vocal cords were supported by a vocal track on his farewell tour—and quite significantly so.

When playback is the lesser evil

We can argue what is better—to pay for tickets to a concert and hear a great performance and show, only to learn that it's all a shiny facade covering a half-decayed building. Or to witness the harsh and ear-splitting reality of ageing singers who are lynched for their terrible vocal performances and guitarists who are always out of tune.

As an example of the first option, let me share my experience from another genre that enriched this year's Czech festival Colours of Ostrava. While looking for something to eat, I was passing by the main stage and heard something that I thought would never appear in the line-up of a festival with such a big name and usually great production.

Princess Nokia is a New York rapper currently boasting a million followers on Instagram and incredible numbers on streaming platforms. When the listener (or perhaps better said, the consumer) listens to her records, they are perfectly refined in the studio and fully compliant with current trends. However, when her music production moves into the concert version, disaster strikes.

Probably due to the lack of self-reflection, the performer doesn't realise that she can't sing at all and shouldn't even try because what the autotune can achieve in the studio, can't be matched live. The combination of bad intonation and badly phrased singing and rapping (or whatever it was) with the loud half-playback of the same parts she is singing live cannot end well.

Princess Nokia tried to save the day by using a siren or horn after every other sentence, wiping her tongue and other parts of her body with a towel, communicating in Spanish and crying (quite a few people in the audience were crying too), but it aroused a lot of sarcastic reactions anyway. The listener may not always understand everything. However, such a blatantly insincere farce is obvious.

Sure, this is not really surprising in pop music. The genre is all about looks, virality, controversy and other #numbers-generating aspects, while music is often secondary. But I believe rock and metal are a discipline that stands and falls with live shows, therefore, those shows really should be live.

Why want perfection at the cost of deception?

I'm not a top instrumentalist or vocalist and believe me, sometimes while playing, I think it would be so nice to have it all under control and to make everything always sound great. But lying is wrong. And I wonder how happy the performer himself can be when he watches the audience's enthusiastic reactions and knows that he only performed about fifty per cent of what they heard.

I believe that if musicians must or want to have backing tracks, it is always possible to find a reasonable compromise that will make the concert versions of the songs subtly better without pushing the band to a level which is beyond their instrumental skills. If the musician can't play what he wants, they should practice. If it is beyond his instrumental abilities long-term, another arrangement can be chosen or a better musician can be brought into the band. Or maybe they should just quit.

However, if the trend of increasingly shameless half, three-quarter or full playbacks continues, in a few years we can expect more and more artists with no self-reflection and/or perfect sterile music with no mistakes... and no soul.

Frontwoman of the all-female heavy rock band The Agony. Once a student of journalism at FSV UK, now a woman in IT Service Delivery. She loves good coffee, cold Pilsner, sarcastic lyrics, good riffs, enthusiastic female musicians and…
RELATED ARTICLES

Notes of a Frontwoman #4: Without Songs We Are Nothing

Notes of a Frontwoman #2: "I'll Do It Myself" or Releasing a Single from A to Z

Notes of a Frontwoman #1: Five New Insights Into Studio Recording
most read news