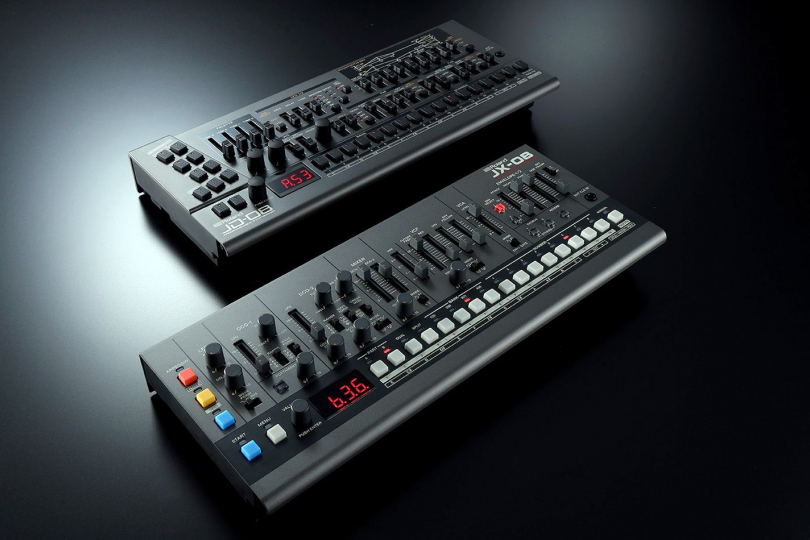 Roland has included a pair of new JD-08 and JX-08 synthesizer modules in the Boutique special edition, with an architecture and sonic palette based on the popular JD-800 and JX-8P synths that helped define the music of the 1980s and 1990s. Both hardware reproductions of their famous predecessors are software-driven, use a similar engine to the virtual ZEN-Core or company plug-in versions, and can of course be connected to an optional keyboard or docking station, making the modules full-fledged standalone instruments.

The Roland JD-08 offers all the original presets of the JD-800, but the memory capacity has been increased to 256 slots. The developers have also integrated new faders into the Palette section, which by default provide control over the level of the four tones, but can also be directed to any desired parameter.

A two-channel polyphonic (four-voice) sequencer with 64 steps has been added, allowing access to two different presets, so that the bi-timbral 08 is able to operate partially as a groovebox. The LFO, WG, Pitch, TVF, and TVA ENV units have been fully retained and the effects block includes distortion, phaser, spectrum, enhancer, delay, chorus, and reverb.

On the back of the chassis we find a power slider, a total volume potentiometer, DIN MIDI In/Out connectors, mini-jack stereo headphone jacks, audio output, and Mix In. There's a USB-C audio/MIDI port that also serves as a power supply, and a mono sync input for an external clock on the main panel. Supplying the necessary power can also be handled by four AA pencil batteries—alkaline cells are included.

Like the JD-08, the Roland JX-08 features a bank of 256 presets, including all 32 patches of the original hybrid (analog/digital) synthesizer, and hundreds of new presets. Again, a four-voice dual sequencer and this time an arpeggiator have been added. The effects section features 18 effects, some of which are available for the first time in the Roland Boutique series of instruments.

In addition to reverb and three types of chorus, the sound can be enriched and modified with a delay (4 x), frequency filter, pitch shifter (2 x), phaser (2 x), or Lo-Fi compressor; or distorted with an overdrive, bit crusher, or fuzz. Connectivity is identical to the JD-08 version and the power supply is the same. When using Ni-MH batteries with a capacity of 1900 mAh, the manufacturer indicates an average endurance of about 6 hours of continuous operation.

Programming of the older JX-8P polysynth from 1985 was not an easy matter, which is why years ago the manufacturer designed a rather large programming station PG-800, eliminating at least part of this drawback. In the case of the JX-08 module, the programming unit is already built-in and allows quick, intuitive editing.