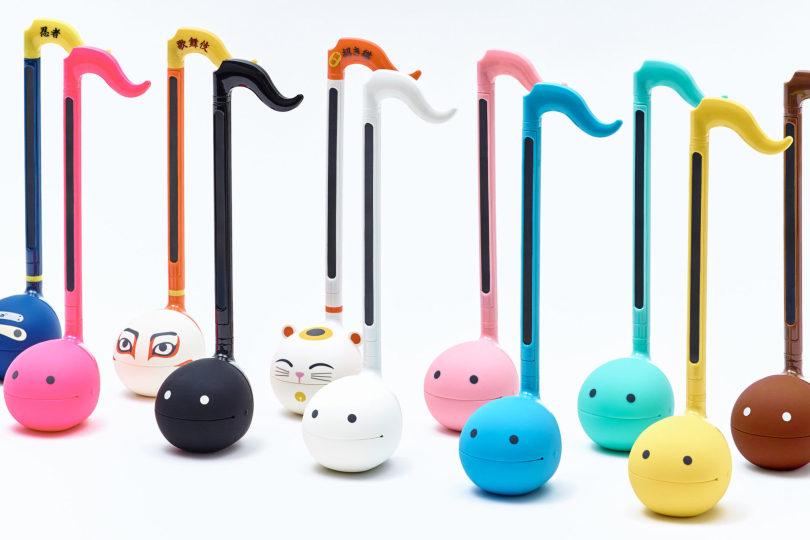 Otamatone is an electronic synthesiser from Japan. Its witty eighth-note design and theremin-like sound has gained popularity especially on TikTok and YouTube where you can find many cover versions played on this truly bizarre instrument. | Photo: Otamatone.jp
mbx - Fri, September 23, 2022 - 08:00

You only need to look around to see that the whole world is not just a beer opener (the punk vision of the world), but an endless well of possibilities of what can be played and what sounds can be produced, whether pleasant or unpleasant. Why limit yourself to the six strings of a guitar or the keys of a piano when you can clink glasses, squeeze balloons or even blow into a vacuum cleaner pipe, right? Let's take a look at the TOP 5 bizarre instruments you can currently buy on the market.

The nose flute is originally a toy for children and requires absolutely no musical knowledge. It is simply held against the open mouth, which acts as a resonance chamber (thus replacing the body of the flute). Then you just need to blow into the top hole with your nose. The sound can be altered by slight movements in the mouth and throat area, just like when whistling or singing. You can also create a variety of other effects, such as a vibrating tone (vibrato), tongue flicking and many other eccentricities beyond your imagination.

Surprisingly, the nose flute has been successfully used as a therapeutic aid in the treatment of speech and language impairments or respiratory problems. Actually, it is an effective, play-based method of training the fine motor skills of the mouth, throat and nose for more effective breathing coordination.

Yes, you are reading correctly. If you have a desire to turn your guitar or bass sound into naturalistic sounding farts, break-winds or flatus, now you can get one here. Just beware, this is a highly sought-after item and the waiting time is very long. The manufacturer, with a slightly ironic undertone, describes his product like this:

"The Fart Pedal is a guitar effects pedal that turns your guitar noises into fart noises! The Fart Pedal is loaded with high-quality bespoke fart sound effects created by an award-winning sound design company based out of Chicago. These tantalizing toots have been custom tailored for your guitar's amplifier and enhanced for live performance. With a wet and dry toggle and output control, you can blast out honkers that take your performances to new heights. The Fart Pedal is a must-have on any serious guitar player's pedal board."

For all the crazy piano lovers who would love to have their "baby grand piano" with them everywhere, there's the quirky Yubi De Piano. In theory, you should be able to play your favourite Schubert anywhere with it. With its wire-cyborg design, the device looks like a really peculiar watch. Or rather, it looks like a little octopus stuck to your hand because there are wires leading from the pseudo-watch to your fingertips terminating in plastic caps with the words Do, Re, Mi, Fa, Sol.

Once you have tuned the Yubi De Piano to get the sound you want, simply start tapping your fingers on any hard surface as you would press the keys on a piano. When you press the buttons, the instrument will play the appropriate musical chords or single notes. Of course, this is more of a toy, but I think you can have a lot of fun with the Yubi.

This is a synthesiser from Japan, whose body is shaped like an eighth note (to some it may also resemble a tadpole or a ladle). The sound comes from a "mouth" located in the head of the imaginary note. The playing technique requires two hands: while one hand holds and squeezes the "head," the other hand controls the pitch by placing a finger on the ribbon controller on the stem. The ribbon controller has a deliberately asymmetrical layout to resemble playing a violin or guitar fingerboard where distance between higher notes is shorter than between lower notes. Somewhat counterintuitively, a higher position on the controller produces lower tones.

Varying the pressure on the head (therefore opening and closing the Otamatone's "mouth") creates a wah-wah effect, and shaking the neck ( thus slightly changing the pressure on the head) creates a vibrato effect. Switches on the back of the head allow users to change octaves to vary the volume or turn the whole instrument off and on. The sound produced by this instrument can be compared to a theremin or the traditional Chinese string instrument jinghu.

What do you do if you're a guitarist, you are allergic to cats, but really wish you had one to mess around with your favourite pedals? Of course, you make a fuzz pedal that not only looks like a cat but sounds like one too. And that's exactly the crazy idea that a young German guitarist calling himself Shoegazer had. He turned his dream into reality with the help of the skilled engineers from Summit Amplification and the Katzen Jammer saw the light of day.

Now I'm wondering... how about combining it with the Fart Pedal? We may have just discovered a new trend on social media—cover versions of famous songs in the style of farting cats. A great musical start to autumn 2022, haha!

Have you also come across any bizarre musical instruments on the "internets"? Share it with us in the comments!