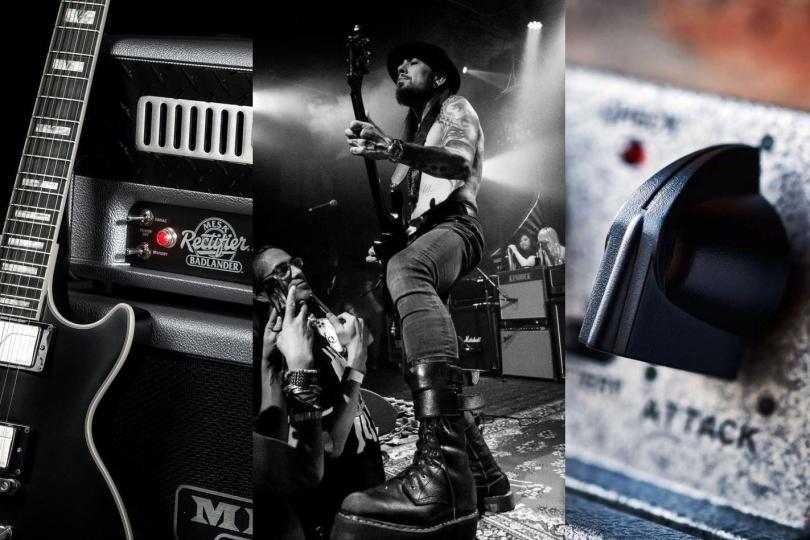 Did the past year herald the dawn of the transistor age or a new era of "super bands"? How crucial is the connection between Mesa Boogie and Gibson or Korg and Aguilar? The choice of topics that in the field of musical instruments and gear would easily justify the headline of this article will always be subjective, just like this list of mine. All the more reason why we would be delighted if you could contribute your own picks for key music industry events in 2021 in the discussion below this article.

Early last year, Gibson officially confirmed that it was taking over the Mesa Boogie brand, the legendary California manufacturer of amplifiers, combos, cabinets, and other musician's "tools." Whether it was Mesa's financial situation that played the primary role in this unexpected acquisition, or the announced interest of its president Randall Smith in a permanent cooperation with a strong business partner, or on the contrary Gibson's desire to own another traditional American brand after Kramer, Steinberger, etc., we may not know, because both parties are silent about the real reason for this transaction.

According to Gibson executives, Mesa Boogie will continue to develop and manufacture new products under its own name, and the good news is that the brand from Petaluma, California is also to serve as Gibson's Custom Shop for its upcoming amps, combos, and boxes. Company representatives also confirmed that Randall Smith will remain as Mesa's chief designer.

Upon taking over Aguilar, which was founded in 1995, Korg said the American manufacturer would officially be renamed Aguilar Musical Instruments LLC. Company president Dave Boonshoft will continue as the principal consultant to the product development department, factory headquarters and brand personnel will remain unchanged, and orders will still be fulfilled as scheduled.

3. Bogner, Friedman, Diezel: Is this the dawn of the Transistor Age?

All three of the above-mentioned brands are among the market leaders in high-gain all-tube amplifiers—and due to their reputations based on their purist approach, professional sound in every respect, and of course the necessary dose of marketing magic, it seemed unthinkable that these boutique manufacturers would be willing to embark on the development of amplifiers that have nothing to do with tubes whatsoever.

But last year proved us otherwise. First Dave Friedman, then Reinhold Bogner, and thirdly Peter Diezel introduced single-channel mini versions of the BE-Mini, Ecstasy Mini, and VH Micro full-transistor heads, with preamps bringing a significant character to the distortion channel sound of their flagship Friedman BE-100 + drive BE-OD, Bogner Ecstasy, Diezel VH-4, whose undersides (with the exception of the BE-OD pedal) are crammed with tubes.

The second common denominator of these little amps is their striking structural similarity—given their identical dimensions, weight, rear connector placement, handle design, power supply, and output, all designers most likely decided to outsource the mass production of their mini-amps to the same Chinese company, which did not even try to differentiate the design of the rear panels and other elements in any significant way.

On the other hand, this is largely a visual component, not affecting the sound, and if we are to believe it, the compensation for a certain design monotony is perhaps reflected in a more accessible price, which for all three of the models is identically around 300 euros. Will the "Big Three" be followed by other high-end tube manufacturers?

If you had to guess the best-selling signature electric guitar of the past year, you would probably think of several instruments, but the top spot is still held by the classic Gibson Les Paul, which is still presented by the manufacturer as the signature model of the very popular guitarist Les Paul (Lester William Polsfuss, 1915 - 2009), who also contributed significantly to the technical innovations used in this icon. But which signature is second place according to last year's sales figures?

Is it Steve Vai's Ibanez JEM? Brian May's Red Special? One of Slash's Les Paul models? Or Eddie Van Halen's EVH Wolfgang? If you guessed any of the above, you'd be wrong, because the correct answer is John Petrucci's Ernie Ball Music Man Majesty. Petrucci himself revealed this surprising result during an interview concerning his particular Majesty model, which at the time of the first product series release utilized new design concepts, in some ways challenging long-standing guitar building norms.

"My goal wasn't to reinvent things we had worked hard on before, but the primary goal was to take the guitar to the next level by making our first version with a thru-neck. Of course, I didn't want to just build a thru-neck version of my older Music Man. I had this idea that I would make a guitar that would react the way you drive a race car—everything about it would be so easy. To ensure it was light, the curves and contours just didn't get in your way, the neck was incredibly comfortable to play, and it had great mechanics. All of these things were our goal at the beginning," Petrucci commented on the development of the Majesty.

5. Boss tries to compete with boutique brands with TB-2W Tone Bender and FZ-1W

In the case of the effects giant Boss, the previous year was marked, among other things, by the premieres of two pedals from the elite Waza Craft series, manufactured in Japanese workshops. It's no secret that Roland's subsidiary, by offering effects from this collection, wants to at least partially break out of the drawer of "standard" companies, which in the time of the effects boom are beginning to be steadily, but subtly, trampled on by a growing number of small manufacturers and boutique brands, in addition to cheap Chinese competition.

Coming from such a large and well-established company, this is actually a sympathetic move—both because its market position is still almost unshakeable, and also from a historical perspective, because Boss pedals became a cult back when most boutique owners were still in their diapers. Moreover, Boss effects are known for their durability, not to mention the fact that probably every successful effects guru today was basically trained on the circuits of older Boss, Ibanez, MXR, EHX, etc. models, or at least gained their first experience in the field.

Why do I mention the TB-2W and FZ-1W pedals from the whole Waza Craft series? First of all, naturally, because they appeared on the market last year, and secondly because in a way (together with the Angry Driver JB-2 model from 2017—which, although it does not belong to the W series, was developed in cooperation with JHS) they stand out from the established program of this collection. Most of the Waza Craft effects are based on classic Boss effects with the addition of a second special circuit, while both the FZ-1W and TB-2W were started from scratch, so to speak, despite the fact that the former's design evokes earlier editions of the FZ-2 (1993), FZ-3 (1997), and FZ-5 (2007).

What is admittedly disappointing about the TB-2W Tone Bender version is its limited edition of 3000 pieces and the price tag which is not among the lowest, but this could be explained by a truly honest approach to development and a rather complicated process of calibrating each piece, which, according to the manufacturer, sounds identical to the original reference "vault" vintage pedal Sola Sound MKII from the 1960s with serial number 500, which became the model for these effects.

Getting all TB-2Ws to sound exactly the same is not easy with the chosen distortion circuit. Moreover, getting enough of a certain type of germanium transistors for several thousand effects, and their subsequent testing, required a considerable amount of work and time. The price of 350 euros will appear in a slightly different light, also taking into account that part of the proceeds from the sale goes to the British company Sola Sound.

The Fuzz FZ-1W has undergone a similarly complicated evolution, the result of detailed analysis of many legendary fuzz pedals. Thus, the FZ-1W is not a replica of one particular vintage distortion pedal, nor does it build on the circuitry of previous company versions. High-end silicon transistors have been used, and thanks to many modifications, last year's newcomer is more flexible compared to older fuzz, has ample gain margin, lower noise, and also better tolerates other effects in the chain compared to many vintage pieces.

In addition to the Vintage mode, scoring with its aggressive sound and extreme sensitivity to the input signal level, the Modern mode can be used, providing maximum consistency of expression and a voluminous tone with massive supporting mids. The aforementioned sensitivity of the input section allows the effect to respond smoothly to the handling of the guitar's volume control, easily transitioning from clean register to wide crunch to saturated fuzz.

A significant number of reviewers rate the FZ-1W very highly, both for its musical sound without unnecessarily shouted treble, and for its versatility, which extends into boost, overdrive, and distortion territory, so the pedal could also be appreciated by players who don't seek out the characteristics of classic fuzz.

It might seem that the last decade has not been very favourable for the emergence of so-called super bands, i.e. bands made up of well-known musicians. Perhaps not, but the covid restrictions have messed with the music scene on both sides of the Atlantic in such a way that musicians who under normal conditions would probably not find much room in their work schedules to meet and collaborate with each other are getting together.

The Californian crew managed to record a few tracks during the lockdown, later complemented by the video singles "Feed the Cruel," "Devil That You Know" and "Lazy Eyes." After a partial relaxation of restrictions, a premiere performance at the Ohana Fest Encore event in October was followed by more shows with several guests.