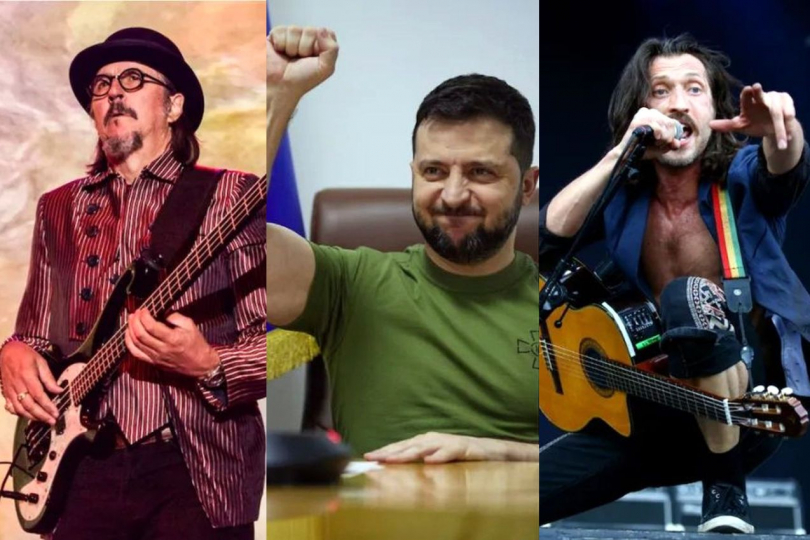 Les Claypool, the great bassist and leader of the band Primus, approached Ukrainian-born musician Eugene Hütz, frontman of the American punk rock band Gogol Bordello, and together with several guests recorded a song called "Zelensky: The Man With the Iron Balls," dedicated to Ukrainian President Volodymyr Zelensky. The track blends the avant-garde sound of Primus and the style elements of Gogol Bordello, backed by a "garage" mix.

In the studio, Claypool and Hütz were joined by John Lennon's son Sean, who provided some of the guitar and vocal parts, The Police drummer Stewart Copeland, guitarist Billy Strings and Hütz's bandmate, violinist Sergei Ryabtsev. The clip, which appeared on the YouTube channel "officialprimus," was created by Claypool's son Cage.

Below the video, viewers will also find the following message from Claypool: "To show your support for Ukraine, please send video clips of you, your friends, colleagues, children, pets, favourite ventriloquist dummy, or anything else you may deem appropriate or wonderfully inventive, clapping along to the song "Zelensky: The Man With the Iron Balls."

"It doesn't have to be high production—just use your phone, video camera, or old Bolex, send the footage to ironballs@primusville.com. Let the world know that you will no longer stand for this rampant "bully mentality" and that you support the man and people who refuse to let their liberties be undermined."