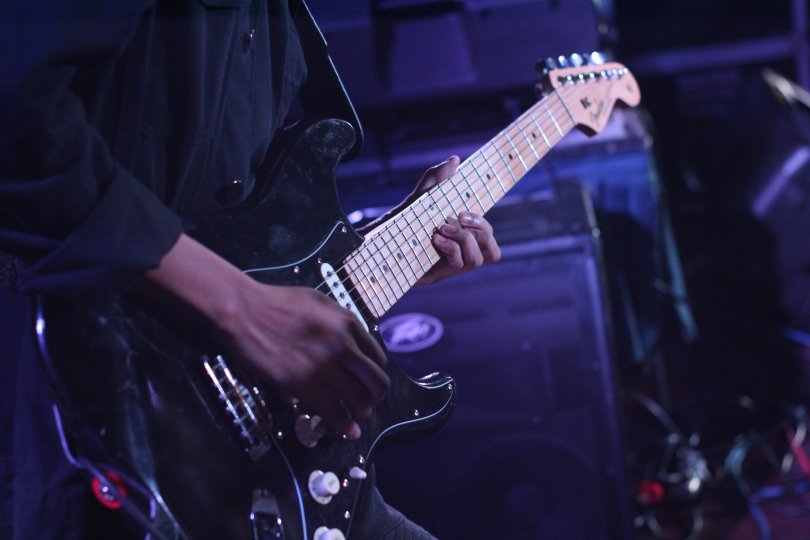 You love music, no question about that. Also, you are planning to dazzle the sold-out O2 Arena with your performance. However, if you really aim further than to the spotlight of a reflector in the regional cultural centre where you find yourself working as a frustrated roadie for musicians who are better than you, you need to practice your instrument properly (in addition to the much-talked-about promotion and image). But let's face it, one is not always highly motivated—and not everyone has that legendary hard-working "Sitzfleisch" to sit patiently and grind out the technique. In that case, you might find inspiration in some of the following tips on how to get yourself to practice, even if you really, really don't feel like it.

Nothing gets you out of the yoga position of a dead man on the couch more reliably than a clear and fast-approaching deadline. For example, showing up to a class with a good teacher completely unprepared is only excusable during a tax return period or in the case of a family emergency.

Otherwise, you should always be ready to play something, even if you had to learn it in the sweat of your face for an hour before the lesson (let's not pretend that it doesn't happen, even if you love music...). During this frantic catch-up of musical homework, you might find that you actually enjoy practising more than you thought and you'll start playing more often.

Or, start your dream band at last and schedule rehearsals. Being embarrassingly unprepared and leaving your bandmates in the lurch is even worse than cowering in front of a teacher—and surely your pride will not let you do that.

Actually, arrange a date and venue for the concert right away. As the date of the performance approaches, even the most persistent procrastinators will realise that if they don't want to shamefully cancel everything or experience a lesson in embarrassment right on the stage, it's better to move their asses towards the instrument and practice something.

"I'm just going to practice that Flea bass line from a tutorial on YouTube and then IMMEDIATELY go (fill in anything relatable) to finish that annoying work email... clean the apartment... work on a chapter from my thesis... study for an exam... make that unpleasant phone call... "

Cut to two hours later: a colleague from work is still waiting in vain for your email and the mess around your desk has expanded to include more dirty socks, a banana peel and several cups of cold coffee. Meanwhile, you've been furiously practising the song, risking tendonitis... But no matter what, you just have to get to the bottom of it. You can't wait to play the whole thing at the original fast tempo!

Sounds familiar? Well, yes, few things motivate a person to compulsively play a musical instrument like procrastination from another, absolutely necessary but all the more unpleasant activity. If everyone practised in their spare time as diligently and mindfully as they do when they officially have something else to do, the world would be full of virtuosos! So, sometimes it's not a bad idea to deliberately schedule a much-unloved activity —you'll see how the procrastination-playing kicks in right away.

You've just read the headlines of all the bad news on the internet for the tenth time and a brief scroll through social media has verified that everyone around you is living a happy, sunny and successful life. Whatever the reason you're feeling generally under the weather, you either fancy burrowing your head under the duvet or screaming loudly and kicking angrily any animate or inanimate object that comes your way.

The last thing you can imagine right now is making music. Still, it doesn't hurt to recall the old, pathetic truth that playing a musical instrument can help you "voice" a lot of unpleasant feelings and thus process them and wash them away.

And if you're afraid that you'll either fall into even more melancholy while playing or, on the contrary, smash your instrument to splinters in anger, skip playing "beautiful" things and go ahead with scales, chords or finger exercises. Better one etude than ten doctors. Playing repetitive melodic-rhythmic patterns mechanically will keep your head busy and create the necessary distance from the oppressive feelings. Plus, you've just done something good for your playing technique, so not everything in the world sucks.

No, this isn't an incentive to deliberately binge on alcohol in the evenings in order to streamline your musical practice routine. Rather, it works the other way around—if you're experiencing the unfortunate consequences of last night's party in the form of a headache, indigestion, impaired coordination or vague recollections of shame—and you urgently need to get rid of it all because you have to start functioning like a normal person within an hour—try to include playing a musical instrument among the healing anti-hangover methods.

It may sound too punk and you may be thinking that all the noise and physical exertion will only make you feel worse. But the opposite is true. You'll start moving, you'll get distracted (this is especially effective for moral hangovers) and, particularly in the case of the wind instrument exercises, you'll quickly get rid of the headache—the intense breathing will oxygenate the brain, the body will wake up and the hangover will be gone sooner than you'd expect.

What did you do as a child when you were in danger of getting bored? You'd think of an activity—build something out of Lego, start drawing or making something... What do you do today? You start consuming data and information in digital or printed form long before the feeling of boredom even enters your mind. You fill every spare moment gathering supposedly important information and gossip.

Imagine you're suddenly offline and you don't even have any books or magazines around. After a while, you get bored—which is not a bad thing at all. Instead of being overwhelmed with information, you'll finally have a space in your head that you'll need to fill with an activity of your own—like playing a musical instrument. So sometimes, it doesn't hurt to just be bored for a while. You'll see how happy you'll be to sit down to play.

Do you also know an effective way to motivate yourself to practice? Let us know in the comments!