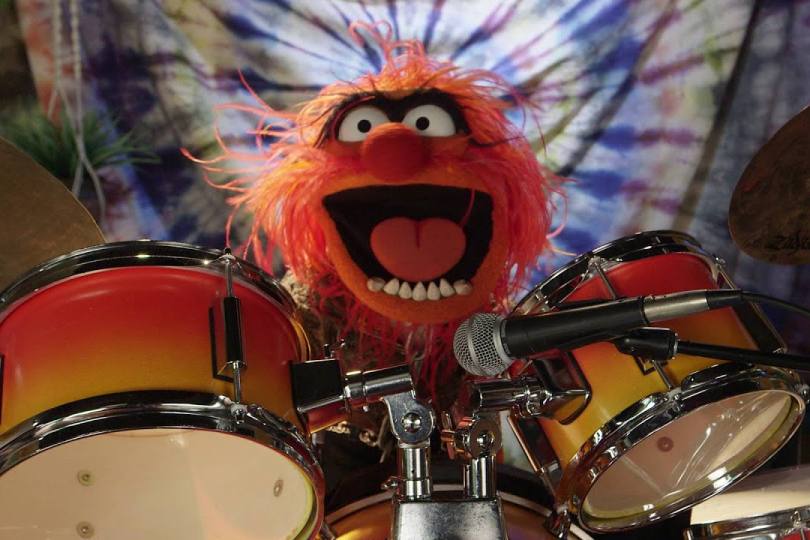 Drumming is hard work, they say. Playing the drums, practising them, packing, loading, transporting, assembling, disassembling, packing again, transporting, unloading... It's not really a hobby or a job for everyone. And we, drummers, still have to endure humorous allusions to our intelligence, musical ear, talent, social skills, thirst and whatnot. We are, in short, flexible and multifunctional personalities, as we will see in the following article, in which I am going to introduce several exciting types of drummers who might excel in other professions, too.

A gym teacher is a person who was born with the body of an ancient demigod. It is also possible, however, that they attained it through their own diligence. Either way, they really like to show off their ripped body behind the drum kit.

After all, what’s a cymbal strike without a jump or a backbend? Why not take off your T-shirt when soaked with artistic sweat, and show the audience not only your well-defined biceps but also your six-pack? Also, people have paid for the show... Besides beating up the drums, our sportsman could immediately start teaching, for example, jumping over the vaulting buck at an elementary school.

A gym teacher par excellence is Dave Elitch of The Mars Volta.

Have you ever been to a concert or a theatre and noticed an inconspicuous dude somewhere up under the ceiling, hugging a huge spotlight with both hands and keeping a close eye on the scene? This hero would always point the cone of light to an important place where things are happening so we can all get something out of it. The kneeling of a hero before a beautiful mademoiselle, the dagger stabbed by a fratricide in his brother’s back in a musical, or perhaps the detail of a guitar neck during a tapping solo.

A drummer can be just such a magical lighting technician of all that is going on, using the tom drums to do this. After all, these toms don’t need to be placed in such a boringly straight line. There are no limits to creativity, and there are drummers who can really aim the proverbial cone of light at anyone in the room just with the inclination and number of toms on their kit. That’s why among the drumming community, they’re called lighting guys.

Nicko McBrain of Iron Maiden is a typical example.

The butcher is a favourite colleague in the band. These are people who would chop the drumsticks and the drums at the same time by hitting the drum. They usually make do with about five pairs of drumsticks per song, so they are held in high esteem by the makers of this equipment. They are less respected by drum and cymbal makers, though. And their popularity in the band goes up with every cracked eardrum of a bandmate. And the sound engineers? They’re over the moon to be able to do the sound for such distinctive playing. Of course, they usually keep their reservations to themselves because such a butcher could quickly become a gym teacher specializing in contact sports.

The butcher’s involvement in the band quite often ends with assurances from bandmates about their uniqueness and a guarded message that they shouldn’t continue to waste their talents in such a pop-rock pack but instead look for some “loaded” one!

An example of a butcher in our article could be Eloy Casagrande of Sepultura.

Did you also love puzzling over equations and inequations, adding and subtracting, multiplying and dividing in school? Then you might be close to our next drummer type. That rock’n’roll is mostly played in four beats? That groove-honouring listeners like dancing to music or bobbing their heads to the beat and enjoying the regularity of the rhythm? Not so our heroes. They were so good at math in elementary school that they’re sort of stuck with it their whole life.

Music is an adventure, and why limit yourself to a regular division, right? A mathematician likes to come up with complicated rhythmic formulas, ideally ones that can’t be deciphered too quickly. And if the discerning ear does succeed, it’s time to immediately change the rhythm in the song to some other, even more elaborate one. The odd bars are layered so wildly by our math-maniac that the less erudite spectator may easily get the feeling that the drummer is playing completely at random. But beware! Songs of this kind are very carefully put together and rehearsed to the last detail in the whole band.

Don’t you despair. If you have a drummer mathematician in your band, your efforts will eventually pay off. Five-hour rehearsals several times a week, along with the absence of a personal life with all that entails, will eventually translate into the right kind of progressive music and a well-deserved sense of musical uniqueness.

A drummer nicknamed the sewing machine is a real hero, especially in metal music. They and the gym teachers used to share a liking for sports, especially football or running when they were young. Kick drum only on the first and third? Why such desolate minimalism when the space of the song can be filled with percussion much more – namely through footwork. Whether you’ve got a double-pedal or two kick drums, welcome to the fold.

Unlike a mathematician, a sewing machine is not so much concerned with odd bars but enjoys sprints, speed and playing for stamina. Just a kind of Usain Bolt behind the drum kit, whose extremely fast feet and hands create sounds similar to an electric sewing machine. It’s time to sew the right DIY jeans jacket!

For example, George Kollias has the machine-gun speed of a sewing machine.

An esotericist is an artist. A gentle and sensitive soul. That other drummers enjoy beating their drums, as long as they keep them going? Nothing for our esoteric drummer. They have much higher musical goals. Music is colours, feelings, moods.

Our esoteric drummers are a bit of a painter, mixing colours and guided by their innermost feelings. They shout their artistic opinions to the world through their drums, cymbals, little cymbals, various rattles, rustles and tappers. Listening to their play, you can find yourself in your imagination now in the rainforest, then in the Sahara desert. Just be careful not to fall asleep, it would be a shame.

Glenn Kotche could be such an esotericist for us.

A musician is by far the worst type of drummer ever. Did you also beat up your out-of-tune guitar in high school and it took you years to even get that damn instrument in tune, or even make it sound like music? When you started a band, did you divide who would play what before the first rehearsal? Like whoever showed the most musicality was going to sing, and whoever was just a good friend sat behind the drums? And was the result corresponding to this, too?

Quite often, that’s how bands start – and then, one or two months after graduation, they end. But some people just keep pushing it and raise their playing level by rehearsing regularly. They say that even a drummer of minimum talent can keep the rhythm and play a nice drum beat or a dynamic break after some 10,000 hours of playing.

And then, a musician appears on the scene. A person who, for some unfathomable reason, enjoys playing drums, even though they can play guitar, keyboard, sing and compose music decently, and generally do a lot of other musical stuff with natural talent. The envy of the rest of us, who had to work for everything, is skyrocketing at that moment. But those people are not to blame; they just have the talent to play anything they touch. So why are they pushing their way behind the drums?!

What about you? Do you know any other drumming profession or variety? Let us know in the comments!

Too Good for the Job: the Trouble with Overqualification