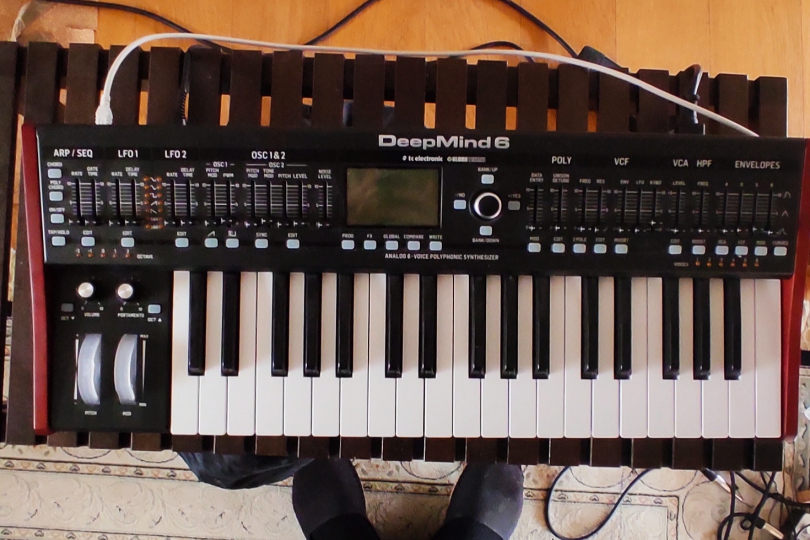 The English language has a gazillion uses of the word “deep.” The term could reference something that is difficult to penetrate, mysterious and obscure, not located within boundaries, immersed, piercing intellect, remote in time or space, being below the level of consciousness and more. When Behringer chose a concept and name for this lovely ton of analogue/digital gear they seem to have used every definition of “deep” to construct one of the most versatile and interesting synths on the market. It’s beginner-friendly, as most analogue synths are, but there is a swirl of brooding subconsciousness whispering in your ear from the first push of a slider. Is this thing Mariana Trench deep, or does mud in the water obscure a shallow bottom?

In 2016 Behringer jumped into the synth market with both feet. After consolidating a bunch of companies under the Music Tribe umbrella (Midas, Klark-Teknik, etc.) they released their first “original” polysynth, which was a combined cooperation of a few of the Music Tribe companies. This synth was the Deepmind. As of today, there are 3 versions: Deepmind 12, Deepmind 12 desktop and Deepmind 6. I am going to introduce you to the 6 below. All work the same, but the 6 has only a three-octave keyboard and half the voices of the 12. My keyboard playing is sub-standard and I have other synths to layer with the 6, so it is enough for me… plus, actual physical space is at a premium in most of our home studios, so the smaller size is welcome.

When I first pulled this thing out of the box it was heavy. Like, weirdly heavy. It's a full metal construction with solid wooden cheeks. It’s got its own power supply and cooling, lots of knobs and sliders, a full 3-octave velocity-sensitive keyboard with aftertouch and is quite meaty. The keyboard, to me, is a highlight. The keys are full size and feel semi-weighted. I actually use it as a midi keyboard for all my other synths. It just feels right and accepts my clumsy playing with joy. The knobs, buttons, sliders and wheels are all solid. Yeah, Behringer quality.

So, from left to right on the face of the synth things look quite regular. You follow the path from arpeggiator, sequencer and LFOs to the oscillator section on through the VCA, filter section and envelopes. Seems fairly commonplace, doesn’t it? Other than the fact that it is broken up by a large LCD screen in the middle and the multiple buttons under each of the slider sections, it does. Let’s do a simple breakdown of the parts before we get into, what I believe, is special about this device. 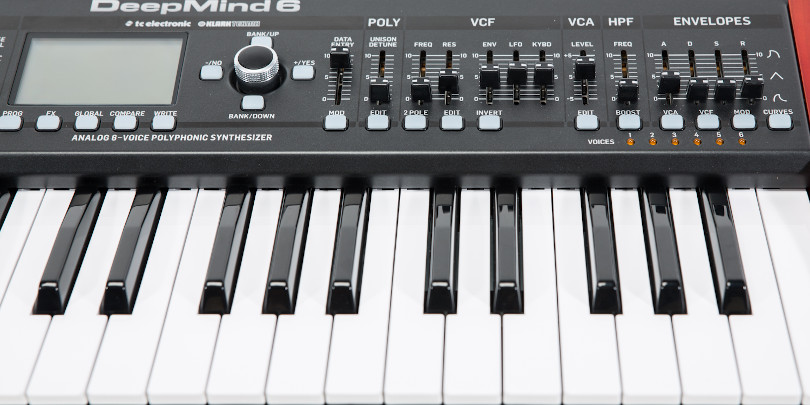 Only two oscillators? I thought this thing was deep…

Both oscillators are DCOs, that is digitally-controlled oscillators. The sound is created analogue, but controlled digitally. Purists may balk, but I feel this adds to the opportunity to manipulate sounds a purely analogue signal path cannot match. Oscillator one can generate a saw, square or both. There is a fader for pulse-width control. Now, this doesn’t go to zero, but with a bit of modulation, does add the usual thickening of sound. However, through the menu button (this sentence will be repeated throughout the review) it can be modified using a variety of sources: LFO 1 or 2, one of the three envelopes, etc. Oscillator two has only one waveform: a boring old square. Bland, huh? It does have something called “tone-mod” though, which can drive us into a weird ring-moddy territory that, with a bit of fiddling can take us into a variety of sounds. This is the kicker. When you say to yourself “man, this thing is run-of-the-mill,” it then offers the opportunity to take you beyond into the deep. There is a sync button on oscillator two which can take you into oscillator sync sound zones. Also, as this is a six-voice synth, you end up with two oscillators per voice, greatly extending the range of twiddling you can do. You want a stacked mono synth with each voice detuned… no problem. Two to six voice unison… check. Pure poly… you got it. The combinations are many. To finish out the oscillator section, there is a noise generator. All in all, solid stable sounding sound.

Let’s start with the arp and LFOs, because the sequencer is where the Deepmind starts to slide into a vortex of time and space. It’s going to take a bit more explaining. The arpeggiator is standard, with a multitude of ups and downs and randoms. The LFOs, of which there are two, have a slew of shapes including sample and hold and sample and glide, my two favourites. These may be, through the mod matrix, sent to almost every parameter in the machine, including effects parameters. They are extensive, to say the least. Use a sample and hold LFO to control the time and feedback of a delay, use another sample and glide LFO to control the rate and shape of the first LFO and you are off to the generative races. I know I have not mentioned the mod matrix where you can do all of this and more, but that is coming up. For now… the LFO possibilities rock. The sequencer is a bit of a different beast. It is not your normal note sequencing feature. Think of it as more of another LFO that you can program yourself. It takes a bit of getting used to, but you have to program values and then, in the mod matrix, send that sequence of values to a destination, same as LFOs and envelopes. It is quite useful, but takes a while to get the hang of. I personally utilize the sequencer for making more controlled randomly generated events, almost like limiting the imagination of the machine. Tame the beast.

A world where everything is possible…

The glaring screen in the middle of the machine shows you everything that you are doing, really everything. It might seem a bit cluttered at first, but it is helpful beyond belief. It is a shame that it is not OLED, but for the price, it is just fine. However, the most important function of the screen while dialing in a patch is the mod matrix. The modulation matrix offers eight slots in which you can use 22 sources to modulate 130 destinations. This is where the deep in Deepmind comes from. The specific sources and destinations are too numerous to talk about here, but I will give a brief about one of my favourites. I love making controlled generative patches with this machine. Using the mod matrix to have LFOs modulate each other in a weird feedback loop and then using the program sequencer to control the mod envelope that, in turn, controls various parameters of effects: it's a surefire way to get lost in a deep, deep rabbit hole of patch creation. Sample bits of 20 minutes' worth of material and you’ve got enough bleeps, bloops, whizzes, whirls, buzzes and rumbles to create multiple compositions. Getting lost in a sound machine is an utterly satisfying life event. Meditation on high.

And the effects… the effects are legion. There are 33 in total and you have four effects slots to employ. The effects were created by Klarks-Teknik and are of high digital quality. There are numerous algorithms of how the effects are chained. Try running a patch through a delay, reverb, pitch shifter and back through the reverb for a glorious feedback loop shimmer. And don’t forget, almost all of each of the effect parameters can be controlled by your modifiers in the matrix.

Is it a bit too mind-numbingly deep dish?

The Behringer Deepmind 6 was my first hardware synth. It just seemed right. Straight out of the box it felt intimidating. Buttons leading to menus leading to other menus, the sequencer, the mod matrix, the pages of effect parameters… it all seemed a bit too much, at least for the first half an hour. After the initial cherry-busting period I was creating and saving patches in no time (1000 patch slots to fill) and thoroughly enjoying myself. Since then, I have acquired a few other synths and even though they are all capable and fun in their own rights, I come back to the Deepmind for the basis of all my compositions. Hell, I even used it on my latest crust punk album to fill in some ambience and a pad/lead or two. It is the most versatile machine I have ever worked with. If Behringer comes out with a Deepmind mk2 with an OLED screen, a dedicated sub-oscillator and more variety of possible oscillator waveforms, I will purchase it immediately. Until then, the original remains my workhorse, my rabbit hole, my composition consciousness. The definitions of deep apply. Look ‘em up, try this machine… you will see that the Behringer Deepmind is an amalgamation of rationale. Deep, man… deep.

I'm a musician, experimental and otherwise, that has been involved in underground scenes since he was a rebellious teen... and on to a rebellious middle-aged nerd. From electronica to punk rock to country and everywhere in-between, he has dabbled in mashing up each as much as…
RELATED ARTICLES