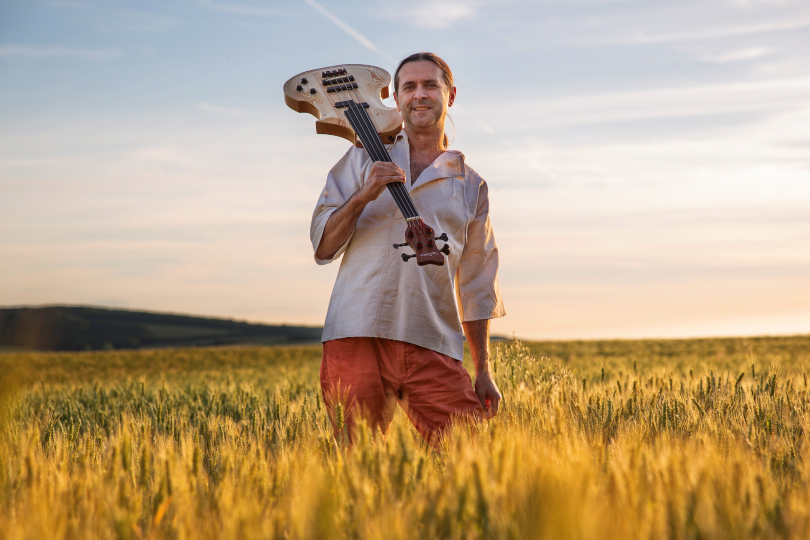 A luthier Ivo Pavlica from Velká nad Veličkou, Horňácko microregion (Upper Moravian Slovakia), is an earthy person and a typical representative of the “golden Czech hands”—a little unrevealed as yet, but his products are gaining more and more reputation. Ivo is a self-taught guitar maker who reached his knowledge of the craft by trial and error. And he is not afraid to experiment and fulfil the wild dreams and wishes of guitarists at all.

I already own three of his instruments, and, using their interesting stories, I’ll try to show you how simple (or, conversely, intricate) custom guitars can be. So how does one “build a dream”?

Our paths crossed for the first time thanks to him playing “extras” in Keramorchestr, and at that time, I didn’t know that Ivo was doing DIY fantastic guitars at home in his cellar. As he puts it, they weren’t great at the beginning, but he kept improving them over time, with intense absorption of knowledge and patient attempts.

At the open day in the brickyard, where Ivo appeared with the Horňácko metal crew to support Keramorchestr, we started to discuss ceramic instruments in detail. I immediately understood that he was not a mere fan, and since I just needed to upgrade the first version of my ceramic guitar, one word led to another, and I placed the first bold and crazy order.

The first ceramic guitar in the world made of roof tiles is, of course, unique and today has a place of honour in the Czech Museum of Records. However, the musical range of the Keramorchestr “from folk to metal” required a more sonically varied instrument with two pickups. This time we took a little inspiration from the iconic Telecaster and created a very versatile Figarocaster (the body being from Tondach Figaro roof tiles), which I have since played dozens of shows with and featured in many music videos.

For a guitar maker, working with roof tiles is a real challenge. It is a very hard yet quite fragile material. Conventional working tools of high-speed steel fail completely here—forget about the chisel and saw. Ceramics is not forgiving mistakes, and you can scrap a cracked piece immediately.

Working tools with synthetic diamond surface helped, but making rectangular pickup cavities was still a struggle. We devised the transition between the wooden neck and the rounded roof tile edge body as a disassemblable bolt joint, which allows us to adjust the pressure force of the two different materials appropriately. 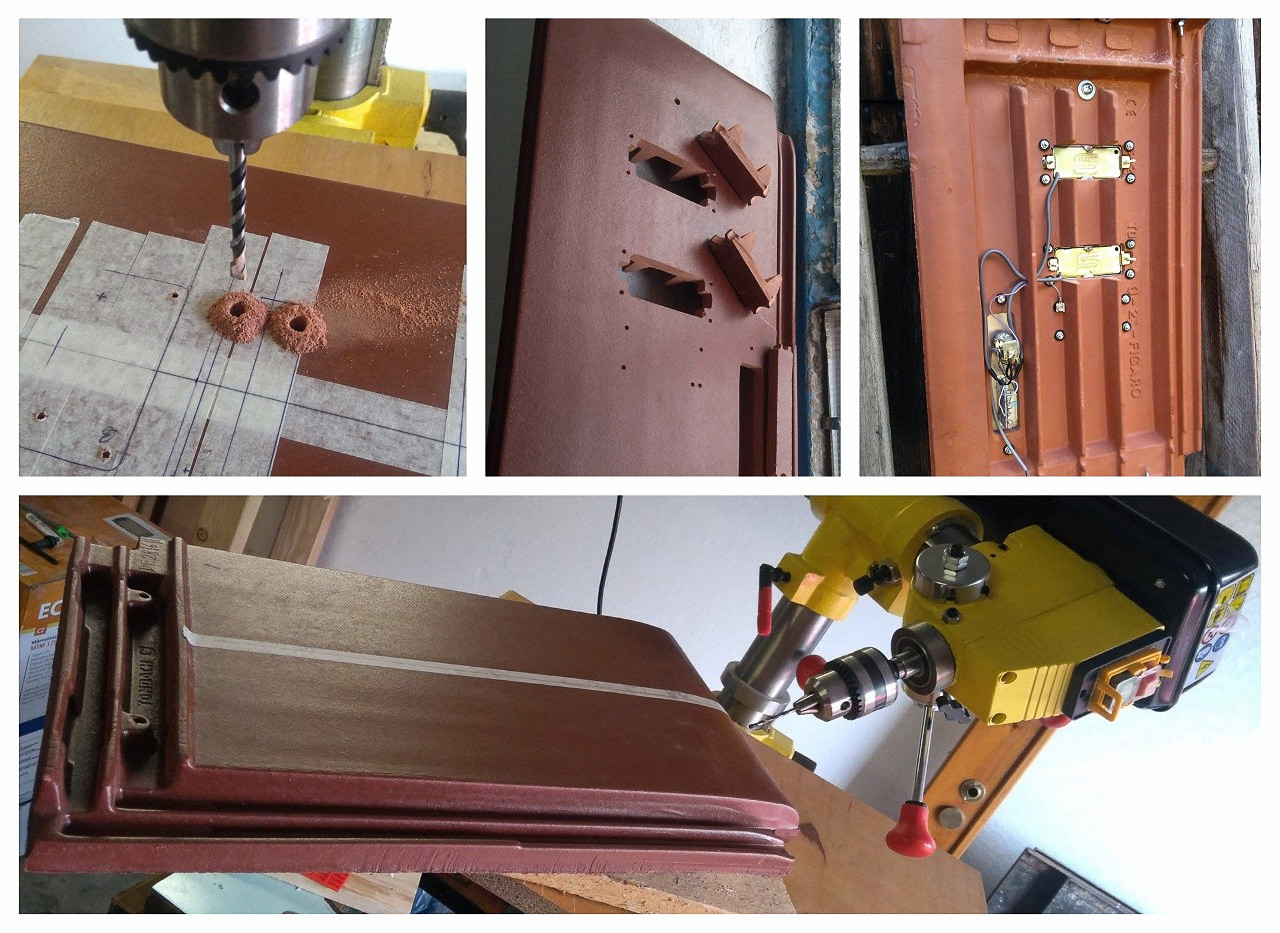 I have been chasing adequate hardware for the intended red and silver look right, left and centre—and for example, the silver Telecaster pickup switch cap arrived all the way from Spanish eBay. The OEM mini humbuckers were a very pleasant surprise, as they can be disconnected with “push-push pots” (just tap them, they don’t need to be pulled out like traditional push-pulls). They provide a wide range of sound colours without hum at higher gains. There are, of course, decorative details of little roof tile inlays that top the clever design all off. Over the years, the Figarocaster has passed through many hands and always with great amazement at how well it resonates, how it sounds—and how heavy it is :)

Since Ivoš passed this incredibly creatively demanding untypical entrance test with honours, we started to get a feel for the following instrument. In this case, it was to fulfil my long-held dream of a beautiful all-purpose guitar. My demands on guitar makers are pretty high, and I require active discussion and cooperation from the initial design. However, the following collaborative project showed me how the original plan could change dynamically during work due to unexpected circumstances.

After long consideration, I finally passed on my well-deserved “greeny one” (Yamaha TyTabor). As I gradually got more and more guitars with thick necks, it became rather difficult for me to return to a significantly thinner neck of the Yamaha TT, both in terms of time and motorically. But its versatility and pickups suited me, and I recorded a lot on it. So I wanted a similar instrument, only ergonomically adapted, to suitably complement my sonic palette.

I’ve always liked PRS and Carvin (now Kiesel) guitars, especially the models with the top made of exclusive flame maple, and I also had a lot of other inspiring details in my mind from JET, GMP and Rozawood guitars. There were a lot more ideas, but putting all ingredients into one pot just does not really work :)

The role of an (industrial) designer is to find an intersection of functionality with a corresponding (uncluttered) visual appearance, so, for example, I had to save bevelled edges with wooden transparencies for another time. However, after lots and lots of discussions, consultations, sketches and sorting out unforeseen complications, the result was exceedingly successful.

The (un)smooth progress was once again crowned with my unerring talent for picking beautiful and perfect things—often just before their production is discontinued :) After carefully researching many sources, I chose a not very used “secret tip” for an excellent combination of woods: basswood body + maple top (used, for example, by top-notch Suhr) with a DiMarzio Breed bridge pickup.

But we couldn’t (!) find good-quality American basswood in Europe, Ivoš was hesitating to use local basswood, and so, by force of circumstances (and to his delight), I was finally persuaded to the more classic swamp ash. He, in turn, got me a beautifully detailed maple top and fretboard and painted the guitar in beautiful natural shades, so that the unwitting comment “it looks like forest and meadow honey” was eventually reflected in the final name JET MED (honey). 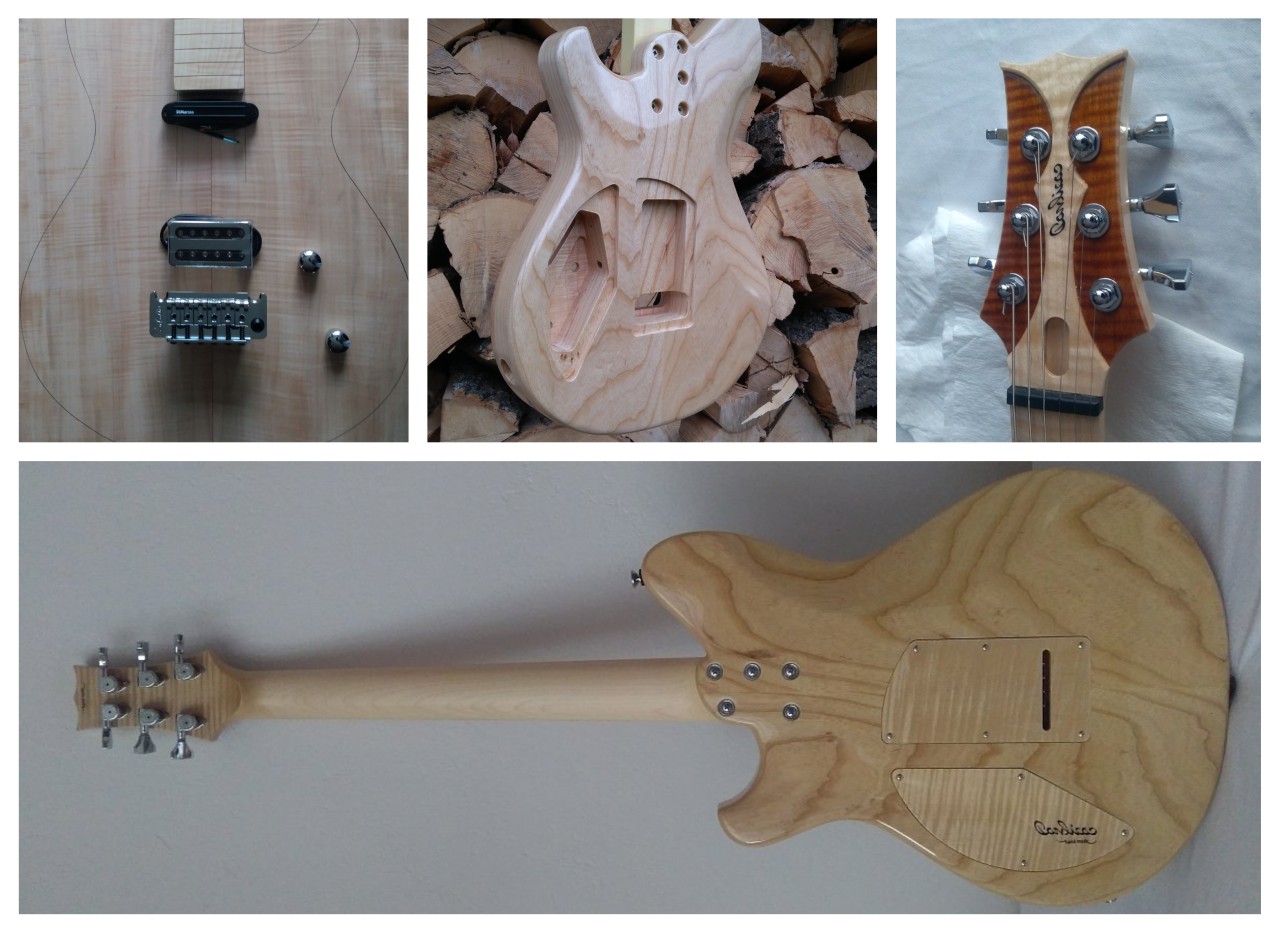 The fact that the Breed humbucker was nowhere to be found, and seemed to have been discontinued, was just a classic funny detail. That’s why I ended up going with a DiMarzio Gravity Storm pickup with similar properties, tweaked with a custom cover in the style of the Bare Knuckle pickups.

I wanted to complement the H-S configuration with an unhumming neck “single”. Because of the signal balance, the DiMarzio Fast Track 1 won out in the end (I even managed to get one in silver on my second try).

I went big on my dream, and we devoted a lot of time and energy to this project. The reward is an excellent guitar, which, as connoisseurs commented, will not be lost even in the highest category of custom guitars. And then, it was time for a completely unplanned side project.

Ivoš came up telling me that his customer had the material of his custom-made guitar changed, so he was left with one neck that was finished—and unused. So his question was if I wanted to use it to build a guitar to go with it :)

Another guitar maker, Honza Fic, recently revealed the formula for calculating the needed number of guitars, which is equal to n+1 (where n is the existing number of guitars). This is exactly what happened in this case because, obviously, I didn’t need any more guitars. Anyway, we ended up coming up with a recycling project called the Partcaster, where the guitar is assembled with different parts.

I searched through the drawers and ransacked the hardware accumulated over the years with the idea that we would try to make a guitar as cheaply as possible from these leftovers. I like the so-called lipstick pickups, and I was still “missing” an offset guitar in my arsenal (with asymmetrical cutouts on the guitar sides), so we set to work.

As it happens in life, man proposes, circumstances dispose. I wanted to reuse the excellent H-S concept. At the neck, a lipstick single with its own volume and a so-called treble bleed circuit (no treble is lost when the volume is pulled down) so that in combination, the blend of pickups could be controlled. And two lipstick pickups at the bridge connected as humbuckers.

But the pseudo-humbucker, despite all efforts and adjustments, did not work well, so crisis management had to come in. After further consultations, a completely new pickup was chosen, the so-called wide range HB, most often used on Fender guitars. It was custom made for me by Tůma pickups and differs from the classic one in the number of magnets (6+6), material (Alnico 2) and a number of conductors (4), which allows to unplug or rephase the coils as planned. In the end, there was no rephasing, and with the two mini-switches, I could choose which coil would play (see and hear in the video above). 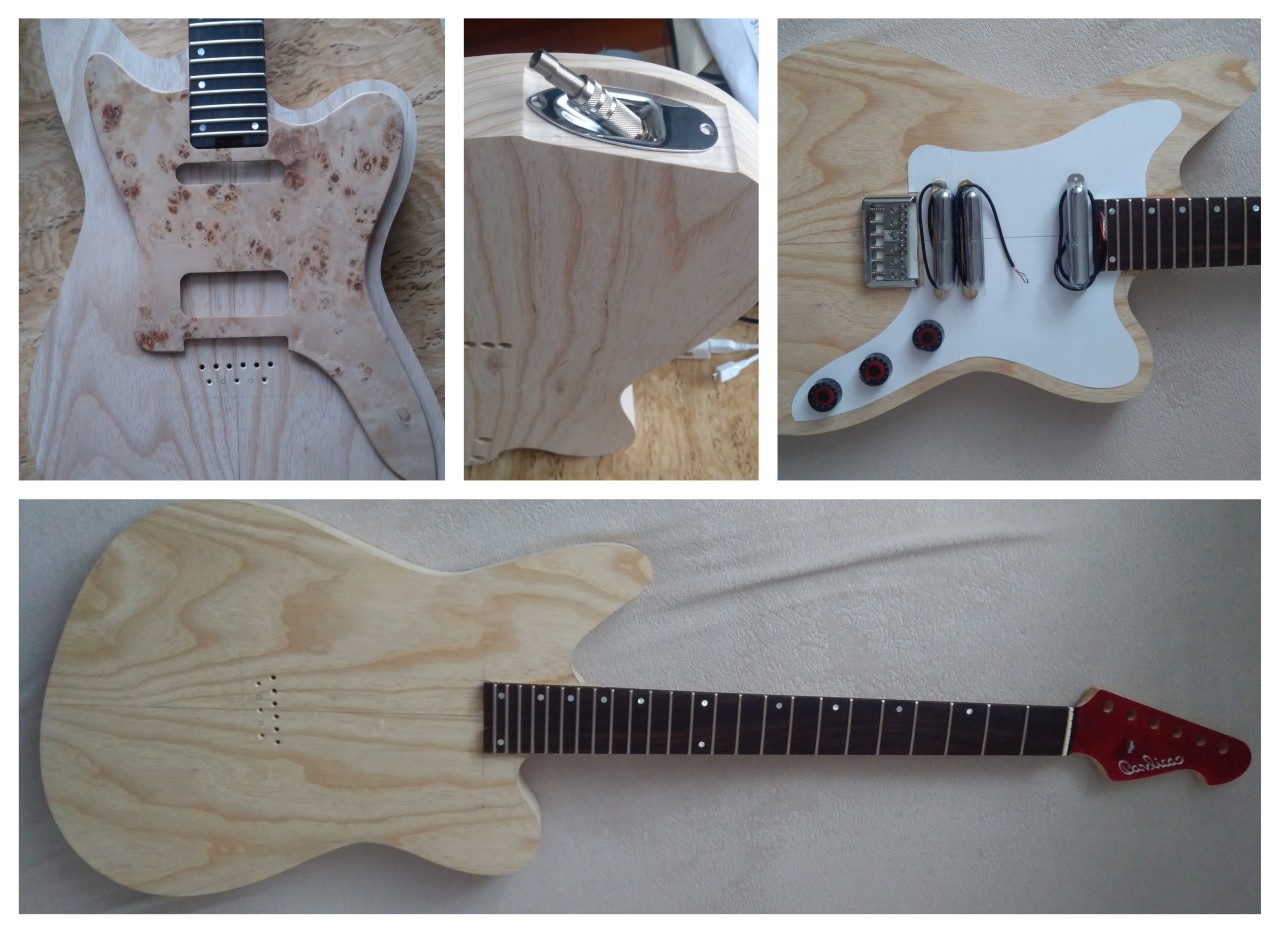 There is still some non-standard irregularity in the wiring that causes a strange “quacky” sound in certain settings. Ironically, this error sounds exciting and adds another unusual colour, so we left it that way.

I would have settled for a completely ordinary plastic pickguard. Still, Ivoš wanted to try an exotic wooden one, which eventually backfired because the pickguard flexed twice and became unusable. So when we were installing the new bridge pickup later, there were holes left from the original Lipstick HB. But we didn’t bother using the pickguard number four, and we consider the holes a detail that proves how dynamic and unpredictable the project was.

Note: I always remember the basic project management rule that it is imperative to plan well, as a poorly designed project can take up to three times as long! A well-planned project usually only takes twice as long :)

Customarily, I added a design-matching bag with the strap because even these seeming details affect your perception of the product. And despite all the complicated peripeties (even the "aliexpress" tuners had to be replaced with slightly better-quality ones), the result is a perfectly resonant and playable guitar with a unique look. Even though neither from leftovers anymore, nor quite the cheapest. Not without reason did the incredible multi-instrumentalist Endy Moon often borrow and use it in his fantastic mashups.

As you can see, a custom guitar is sometimes a wild adventure. No one can take away from you these intense experiences and the invention and energy you put into it, so don’t be afraid to reach out to handy local makers. The reward can be a truly lovely piece of guitar. 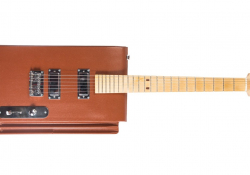 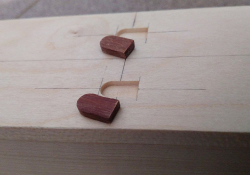 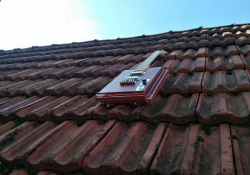 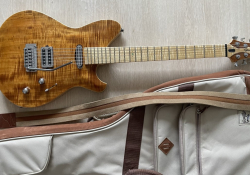 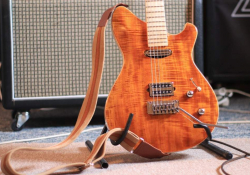 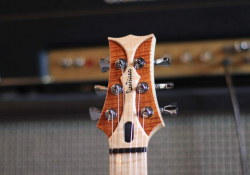 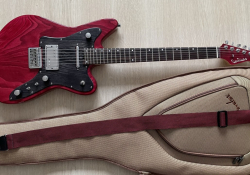 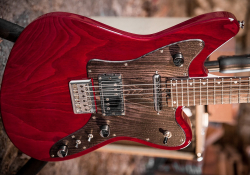 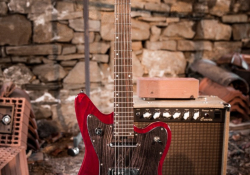