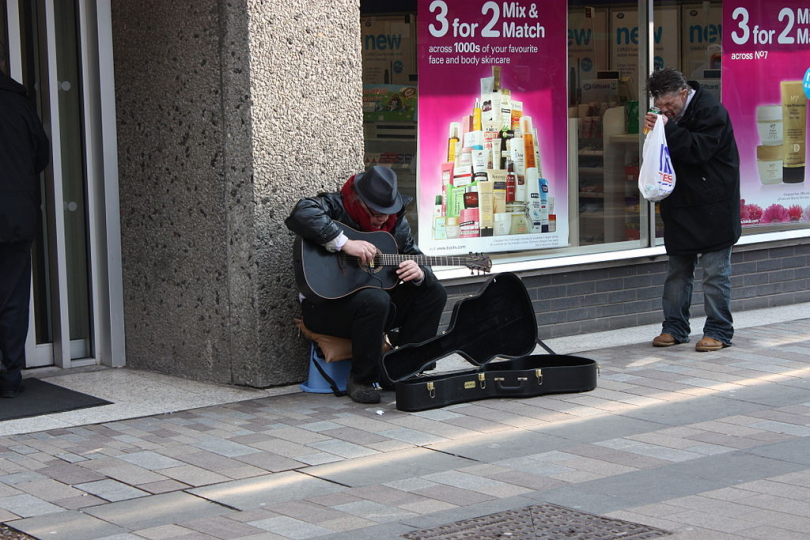 Everyone’s Got a Monday

The child’s hand hung above my hat like the judgment-dispensing hand of Allah above the world. "Dear God," I thought, "Dear God, just drop the sonofabitchin five koruny so I can get out of this Vietnam of a town square alive."

I took on a gig. That was my first mistake.

Or my mistake was in asking my mom to buy me a guitar at 15. Or it was hoisting a Blueridge, superior to the rest in a Colby, Kansas guitar shop. It sang. It rang. It cost $150 more than the others, and Mom made me pay the difference. So now I spend three days at work comparing which Epiphone SG knockoff I can swap some sweet pickups into to get a Gibson tone. So I can spend two days recording and seven days mixing some track five of my friends might listen to for 30 seconds after clicking the Facebook link. I need that sound.

I have trouble playing in front of people without a drink. They never called me a good singer, and when that happens, no matter how good you get you feel like the person you were—and it doesn’t just have to be singing. But I’ve been writing songs three years now, and working on my voice for a year and a half, and kicking it at open mics all this summer and fall. All my favorite singers couldn’t sing.

It wasn’t my first gig. I opened at this place in Prague called Vzorkovna and the crowd loved it but the ownership didn’t or at least I don’t think they did CAUSE THEY HAVENT RESPONDED TO THE MESSAGE I SENT AFTER AND ITS BEEN THREE WEEKS. Not that I’m angry or anything.

So now I’m trying to do gigs, one every other week or thereabouts. I’ve got a South American friend who plays a mean blues. He said, “I think it's a great opportunity for songwriters like you to get exposure.” A drummer friend texted back, “Another time I would, no worries.” A keyboardist who married my third-cousin flew a carrier pigeon with the scribble, “My gig doesn’t get over until 6, and it’s on the other side of town.”

I landed a quiet Romanian and he did alright. Honestly, he was too good. I was hoping for a Viva Last Blues guitar disconnect. And it was all Czech speakers there. And the sky was cloudy and the rock-and-roll songs got the worst responses and my acoustic was mic-ed up poorly and Jesus didn’t die for my sins and the Government took out JFK.

I got real drunk after at my preferred watering hole in town, Medium 43. Well, first I tried to see my friend Bastiaan play showtunes at a hostel nearby, but he wasn’t where he was supposed to be. When I got to the bar/café he was knees deep in beer. I guess there had been some sibling rivalry or deep-state plot to keep him off the keys. I joined him up to my eyeballs.

Flirted with a Lithuanian, played country music over the speakers, ranted about tit hair, vomited in the corner of the night tram, bought a kebab.

You know what bothers me most? I didn’t get that sound. There was a sound I wanted and we didn’t get it. I got it at Vzorkovna and the managers didn’t like it but I did, and I didn’t get it at the square and even though the powers that be were happy, I wasn’t.

“What do you think about God,” I asked him.
“God is dead,” Bastiaan said.
“Then why do I hear him laughing at me while I sleep?”

Jacob Jirák is a writer of words and tunesmith of tunes based in Prague, Czech Republic who hails from rural Kansas, USA. He plays a variety of instruments, not all of them well. Probably the best he ever played was on trumpet during his first year of university, but time conq…
RELATED ARTICLES

Aly Gillani (Bandcamp): Musicians and Fans Cannot Exist Without One Another
most read news