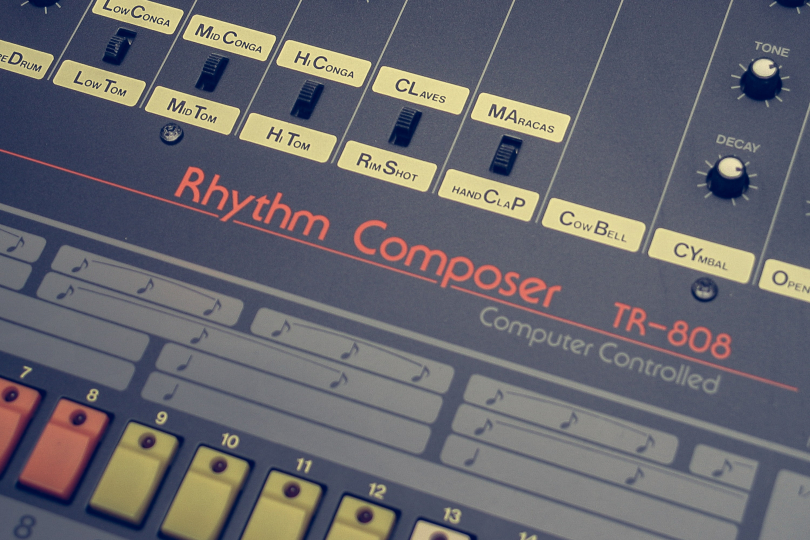 While the first programmable drum machine (ComputeRhythm) was released in 1972, it was to be eight years later in 1980 when Japanese electronic instruments manufacturer Roland would first release theirs. It would eventually be used on more hit records than any other drum machine and was called the Roland TR-808. Read on to learn more about the device's early beginnings and importance in this first part of our new series on instruments and gear that revolutionized the music world: The Gear That Made Us.

Concerning the original development of the 808, it is important to note the influence of pioneering American multi-instrumentalist and electronics engineer Don Lewis. The creator of an early integrated sound controller for analogue synthesisers long before MIDI appeared on the scene, his contribution greatly influenced the possibilities available to artists when performing live. It was Lewis's collaboration with Roland founder Ikutaro Kakehashi which eventually led to the creation of this first Roland drum machine.

What is interesting about the Roland TR-808 is how it was initially disregarded and seen as a commercial failure due to the fact its programmable sounds weren’t said to be enough like real drums. This was following Kakehashi's prior success in popularising drum machines with his previous company Ace Tone. After 1983, the 808 was discontinued, leaving just 12,000 in circulation.

Today, the machine sells for thousands, but back in the ’80s, the device’s initial lack of success soon helped it find a new and eager audience: cash-strapped DJs and producers. By picking up an 808 these folks suddenly had a whole new world of rhythm to explore due to the machine's ability to be programmed instead of using preset patterns. With its low frequency or "boomy" kick, "tinny" handclaps, and "tishy" hi-hat sounds, suddenly the cost of record production had been lowered and there were new opportunities for producers to create and experiment with unique sounds.

Nonetheless, not too long after its production, the drum machine was used on notable tracks, too. One of the most notable is the self-produced “Sexual Healing” by Marvin Gaye in 1982, released during the later stages of his career. With a slower tempo of 94 bpm and a stripped back arrangement, the somewhat bouncy percussion that is achieved using the Roland seems to be the perfect cushion for Gaye’s soothing vocals, the syncopated feel of the post-disco funk keeping things glued together.

With the 808 it seemed that there was no shortage of experimentation or creativity. In the same year as Gaye’s "Sexual Healing," across the Atlantic Ocean in the South Bronx, New York, “Planet Rock” was released by Afrika Bambaataa (the stage name for DJ, rapper, producer and hip-hop pioneer Lance Taylor). Like Yellow Magic Orchestra, Bambaataa had been influenced by Kraftwerk, who actually agreed to let him use the melody from Trans-Europe Express on the record. Bambaataa's South Bronx version unusually featured "mc popping"—a technique where the rapping is done off-time purposely. "Planet Rock," which also used the 808, later influenced key producers like Run-DMC, A Guy Called Gerald and Fatboy Slim and exemplifies how the machine helped to lay the foundations for electro and hip hop to become more prominent genres.

Aside from more mundane events like Channel 4 being launched in the UK and the first-ever Hooters restaurant opening, in 1982 the Roland TR-808 was yet again showing up and on a track that is said to be one of the most celebrated songs in the history of pop music. While it was technically released in the spring of '83, in Los Angeles, California at Westlake Recording Studios the year prior, Quincy Jones was working on Michael Jackson’s “Beat It." That song had it all—Skid Row, leather jackets and Eddie Van Halen... and not forgetting its somewhat approachable feel provided by the groovy, shuffle-like percussion of the Roland.

While the Tr-808's successor, the Roland Tr-909, became just as sought after (if not more so) by music producers due to its influence in the rise of House and Techno, it is nigh on impossible to discount the influence of the 808 on modern electronic music. With the advent of hip hop and club music, suddenly rhythm took centre stage and it was this more accessible Roland machine that helped to create numerous original hits in a wide variety of styles for many years after.

Although it didn't have MIDI, what it did have was simplicity and substance—its analogue subtractive synthesis allowing for the modification of sounds, helping it to become more versatile but also encouraging the producers of tomorrow to take their music where they felt it made the most sense.

From the "new-wave funk" of Warp 9, to Whitney Houston's "I Wanna Dance With Somebody" to the soft rock romance in Phil Collins' "One More Night," it's clear that the Roland Tr-808 is an everyman—but a notable one.

So what do you think about the Roland-TR 808. Do you think it was the most important drum machine? Let us know in the comments below.

Originally from Lincoln (UK), now based in Prague (CZ), my interests in music are quite broad-ranging. As a teenager, I grew up listening to the Foo Fighters and chose to pick up the guitar after watching my step-dad rock out to tracks from the likes of Thin Lizzy and Status-Q…
RELATED ARTICLES