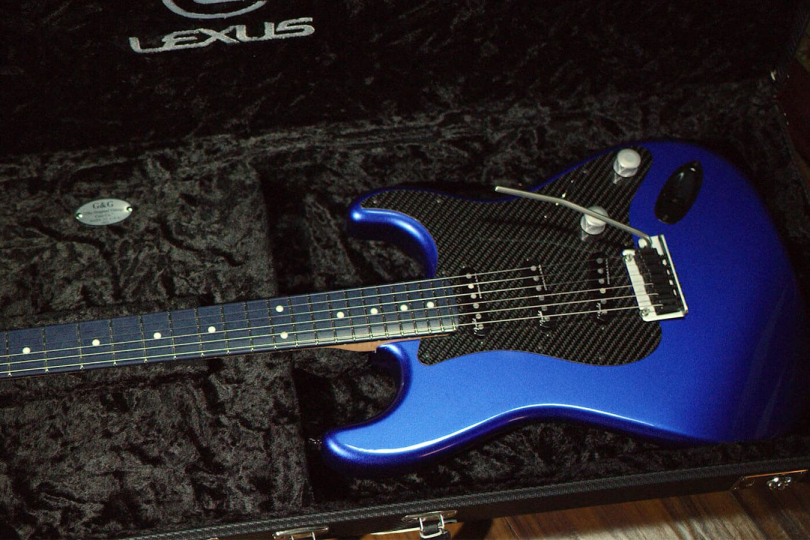 Fender is not averse to collaborating with automotive brands, as evidenced by several models, including various rarities from the company's Custom Shop. The latest creation of this type is the limited edition Lexus LC Stratocaster, the production of which was entrusted to luthier Ron Thorn, Principal Master Builder of the aforementioned elite division. The instrument boasts an exclusive Structural Blue finish, changing different shades of blue depending on the angle of view.

The special hue is inspired by the Morpho butterfly, whose unusually large iridescent blue wings create the illusion that this beautiful insect disappears and reappears in flight. This batch of paint was only used on the Lexus LC 500 Inspiration Series coupe and convertible, and Fender decided to approach the design of these cars with black Allen screws anchoring the electronics, neck and single-layer pickguard evoking a sheet of carbon fiber.

For the first time ever, the Custom Shop guitars used the new single-coil Ultra Noiseless Vintage Strat pickups, controlled by a traditional five-position switch, volume, and only one tone pot. The potentiometers have been given brushed aluminum caps with the design used on Lexus' supercar sound systems.

The body is glued from two pieces of choice alder, and AAA flame-finished maple with a Modern-C profile was chosen for the neck construction, bolted over a plate with the Lexus logo. Like the pickup type, the Custom Shop models premiered a Richlite blend fingerboard in an elegant blue-black hue, with a 12-inch radius, luminescent side markers and 22 medium jumbo stainless steel frets.

The strings are mounted in a more modern two-pivot vibrato and pass through a graphite nut to Schaller Deluxe locking tuners. A layer of black chrome combined with satin chrome plating on the vibrato base, control knobs and mechanical components covers part of the hardware. The Fender Custom Shop Lexus LC Stratocaster will be produced in a limited edition consisting of one hundred instruments, priced at around $6,000 including a deluxe G&G hard case emblazoned with the automaker's logo, certification, service keys, strap, and other accessories.

Under the Hood #14: Why Are Fenders from the 90s So Popular Today