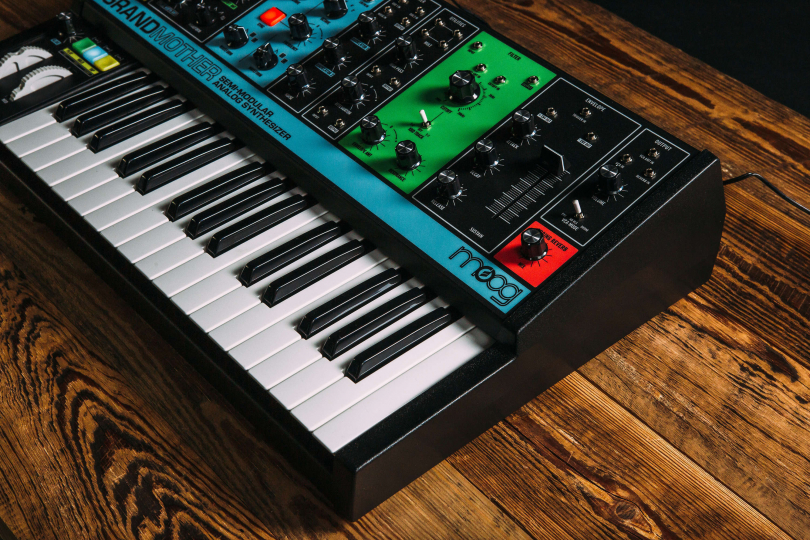 Who among you has not heard of Moog? Or, is it Moog? (I am touching upon the pronunciation debate.) No matter how it is pronounced (it can be both anyway), the name invokes a perspective of respect, sound quality, might and superiority. The Moog sound is the gold standard for replication—I’m looking at you, Behringer—and is sought after by musicians of every genre. I have always wanted one. I mean, anyone who has not instantly felt creamy after hearing a twist of that 24db ladder filter knob, like sweeping through a ton of butter. I recently got my hands on the Grandmother, and jumped in. Is all the Moog-hype historical bias or well-founded and deserved praise?

In 1964, Bob Moog created the first modular voltage-controlled synthesizer. Electronic music had been explored previously by the likes of Delia Derbyshire and others, but to give the public a chance to noodle with electronic sounds was an astounding idea. The opportunity to choose modules to generally construct your own sound device was revolutionary. For the most part, Moog has stayed true to their 1960s ethos. They still produce one for one recreations of their original modular system and have expanded to offering “affordable” desktops with modular capabilities: Mother, DFAM, Matriarch, Grandmother, etc. The Grandmother itself is an all in one accessible open door into the world of Moog and modular. It is fairly affordable and does what you would expect it to do: Rock your socks off!

Ah… the creamy tones of Moog oscillators and filter. The analogue components are a mix of circuits from the 1970's Minimoog and the original Moog modular from 1964. The combination gives us something familiar, but tastefully new. There are two analogue oscillators and each can spit out triangle, square and sawtooth waves. On the square, pulse-wave modulation is available through the modulation sources “module” and there is a big orange button available for sync. Of course, the Grandmother has got tuning controls, frequency adjustment and the like. I found it is best to let this Granny warm up for 10 minutes before use—gotta heat up those bits and bobs first. The oscillators sound Moog fat and I believe that the sync button was a fabulous addition. I found myself using it more than not for everything. Within an hour, I was creating fat basses, searing leads, weird LFO driven bleeps and bloops and other sounds I had not really expected a Grandmother to make.

Moving to the right of the oscillator section, we have the famous CP3 mixer and 4-pole 24db ladder filter. Starting with the sneaky mixer—how can a mixer be a point of interest you are wondering? Well, I would go as far as saying that it seconds as a drive circuit as well. Push an oscillator above 50 per cent and you start getting a warm overdrive that can be shoved into aggressive territory. It offers a gateway into a variety of sonic possibilities, especially when combined with the filter. The filter itself is a Moog classic. As I have stated earlier, it is one of a kind, I really don’t know how they do it. Between the mixer and filter, there are 12 patch points for further mischief. You can snake cables around to hit a few filter shapes: low pass, high pass and custom bypass filters. It is possible to patch a few different signal flows and experimenting with this takes the machine a bit further than you would expect.

There is a simple ASDR at the end of the chain. My only gripe here is that instead of a big panel for one envelope, they could have put in two. Having only one limits where you apply it. 90 per cent of the time I want a completely different envelope for my filter than for my VCA. You can play with a few patch points to mess things about, but in the end, one envelope is all you get. Although this puts a limitation on the device, it doesn’t take anything away from what you can do with the Grandmother.

The modulation section sees the LFOs hardwired to the mod wheel, which is a nice touch. No worrying about programming a matrix on this beast. We can choose from sine, square, saw and ramp waveforms, but no sample and hold, unfortunately. There are dedicated knobs for applying LFOs to oscillator pitch, filter cutoff and pulse-width modulation. Rate can be controlled with its own knob as well. Both the envelope and modulation “modules” are quite basic, but with a few well-placed patch cables you can open up a world of sound, or at least a descent into madness.

The arpeggiator is functional with a few normal modes, including random and the sequencer is actually quite interesting. Notes are entered from the keyboard, so no real-time recording, but the option to use rest, ties, accent and latching are available.

Did I mention the real spring reverb? I sat Grandma down on my desk and heard the springs reverberate. Nice, dirty, dark springiness. 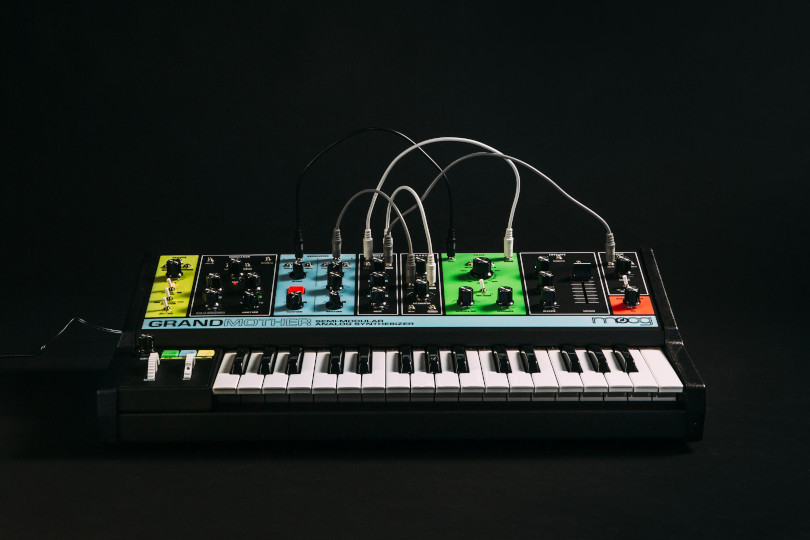 So, does Granny still kick it?

This is not a preset machine, so you will have to churn the sounds on your own. However, do not fear—it is a simple endeavour and quite fun. With 41 patch points, possibilities on the Grandmother are almost endless… almost. Connecting it to a modular system would open up a lot of possibilities. It’s well built and feels like quality. It sounds amazing, of course, it’s a Moog. I feel that this would be a wonderful first synth for someone looking to get into analogue with a possibility to expand into modular. The layout is intuitive and the sound path is tried and true old school. Who could go wrong with a two oscillator Moog and that filter… the filter? After fiddling with Grandmother for a couple of weeks, I could say that I wish I had not played one earlier. Fun.

I'm a musician, experimental and otherwise, that has been involved in underground scenes since he was a rebellious teen... and on to a rebellious middle-aged nerd. From electronica to punk rock to country and everywhere in-between, he has dabbled in mashing up each as much as…
RELATED ARTICLES

The Gear That Made Us #7: The Moog Minimoog

Orange Supernatural Hot Sauce: When You Like It "High-Gain"
most read reviews

Soliloquy or Something To Say: The Korg Monologue
most read articles