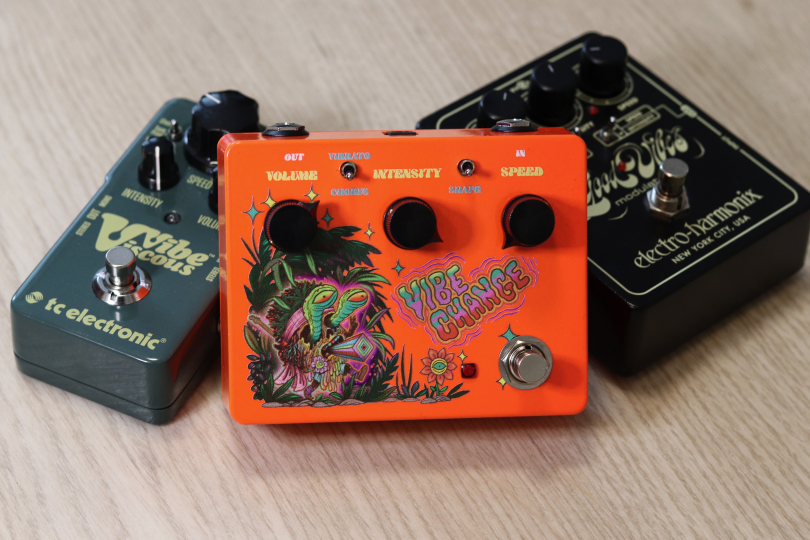 Another essential piece in the effects treasury is the sound of the psychedelic 60s. A cult that came into being partly by mistake asserted itself (and still does) somewhat outside the mainstream, yet became one of the style-forming elements in the arsenal of global stars like Jimi Hendrix and Pink Floyd. So let's dive together into the seductively hypnotic pulsating wave vibe.

From the very beginning, univibe has been accompanied by a literally biblical confusion of languages and concepts, which starts with the name itself—there are arguments about whether to spell it with its original hyphen or use a more up-to-date version without it. The question about what a univibe is can then be answered in various ways. Some say it's a chorus, others define it as a tremolo, a phaser or a phase shifter or even a Leslie simulator. And they are right and wrong at the same time.

The vibe, as it is often abbreviated, is, in fact, a congenial fusion of multiple effects and is all the more exceptional because it was created in an attempt to imitate the rotating speakers of the electromechanical effects device used on the Hammond organ. Despite their undeniable acoustic beauty and uniqueness, the Leslie cabinets are unfortunately also bulky, heavy, complicated, liable to failure and, moreover, sound-wise difficult. While efforts to get them in a more practical smaller package have persisted, it is very tricky to replicate the full range of physical sensations based on the Doppler effect.

And similarly, in 1968, Shin-Ei failed in its attempt to create a believable Leslie emulation but they managed to produce an entirely new effect that Jimi Hendrix immediately fell on. Thanks to his iconic rendition of the American anthem at the immortal Woodstock, the legend of Univibe was born.

I also love Fumio Mieda's story, the designer recollecting his childhood in Japan, saying that he was inspired by the sound of radio waves bouncing off the ionosphere in phases and tried to convert their swishing, pulsing and rippling into a guitar effect.

The original Uni-vibe then further caused the conceptual confusion by naming the modes not very aptly—the Chorus and Vibrato, which is why a lot of people still have no idea that the product they like so much is a special kind of phaser (the closest thing to that specific circuitry). You can get the original today for "only" a thousand dollars, approximately. Like any proper vintage cult, it's bulky, liable to failure, power-sensitive and has a long-unused "five-pin" external interconnect pedal.

Hence the gradual emergence of many successors. One of the first was the popular boutique Fulltone Deja Vibe. Personally, I'm happy to see a unique Czech univibe product—Electronic Orange Moon Vibe that is highly regarded in the vibe chart on the Gilmourish.com. (By the way, this site is probably the best resource of knowledge about the sound of Pink Floyd's David Gilmour, who after Hendrix is the next most characteristic user and promoter of the univibe effect.)

In addition to the uncompromisingly authentic vintage sound, Honza Hořínek has, of course, added a few modern improvements to the Electric Orange Moon Vibe, such as a diode that flashes according to the wave speed, sufficient circuit volume, the Symmetry control for adjusting the pulsation character and true bypass with extended bulb life. Yes, you hear right, every original univibe has a tiny blinking bulb inside! Four photo resistors react to its fading and lighting as four phase stages with staggered filters—unlike the classic phaser that shifts phases by an equal amount. For details, see, for example, the cult book Pedal Crush.

The analogue imperfection of the delayed bulb start (filament glowing) produces a characteristic deep univibe waveform, the so-called throb. Univibe is actually a unique four-stage phaser excited by an actual bulb. This detailed description reflects the complexity of the production, influenced, moreover, by certain tolerance with the components, so often everything has to be fine-tuned by hand, or, so to speak, "by ear".

This is why, of course, there have been attempts to replace this technology, unsuitable for mass production, with something simpler. For example, the light bulb was replaced by an LED, and there was an attempt to digitise the whole process. It is interesting that, apparently because of the low demand, these innovations do not remain on the offer for very long. But that may be an advantage when buying in a second-hand shop because they are now being sold out for peanuts.

TC Viscous Vibe, for example, was introduced with much fanfare as the perfect digital version of the original univibe. This may be true, but you have to mine it from the depths of an editor with dozens of adjustable parameters. I honestly don't understand TC's marketing department for not putting some tuned toneprint into the basic offer. However, it was their fight and I believe that it may have contributed significantly to the actual sales failure of this otherwise nifty and affordable pedal.

Its digital counterpart, Digitech Ventura Vibe, was similarly “successful”, though probably for different reasons. (By the way, I once used that pedal at a Christmas hippie party to imitate Hendrix :) An attractive inexpensive option, unfortunately also bygone, used to be the Danelectro Chicken Salad, which hid a scaled-down original circuitry including a real bulb in a smiley-shaped orange plastic box. With a simple DIY trimmer foil modification, you got a deeper wave and more adjustability of the waveform, as you can hear in my old demo.

Another option available is the interesting EHX Good Vibes, for example, where you can choose whether to use an external pedal to control the speed or the wave depth. Just beware that Mr JHS states on his YouTube show and blog that the EHX has a real bulb, which is unfortunately not true. An LED is used as the optical exciter, similar to another misrepresented bulb in this wavy discipline – EarthQuaker Devices The Depths.

To my ear, all these "substitutes" do not satisfactorily capture what I enjoy most about univibe—a slow, deep, lazily rolling wave. Actually, all of them (regardless of the technology used) can handle faster waves decently. But the crucial wavy moment is in the slower tempos, such as in Pink Floyd – "Breathe".

I remember how disillusioned I was with the original Line 6 preset, which remotely reminded me of univibe. They've improved it a lot in the newer Helix version, but the slowest wave is still not as pleasant, musical, deep and believable as with a real bulb. After all, even Mr JHS himself confirms this in his in-depth analysis, "A univibe without that bulb inside is really just a fancy phaser, and let's be real: you don't need a fancy phaser. You need a univibe!" And I agree with him, so I'm personally only looking for bulbs, such as his JHS Unicorn or the brand new DirtyBHinds Vibe Change.

I had the privilege to lend my ear a bit during the final tuning of the signature vibe box for Brent Hinds (Mastodon), as it came from the workshop of the famous gear guru Tony Salva. When comparing it to other products, the facts described above became apparent. The slow wave is the decisive factor. The Vibe Change also has an excellently tuned volume range, the ability to switch the wave character to even greater depths, the internal trimmer to adjust the expression sharpness according to the guitar or amp used and, as a funny detail, a bulb cap using 3D printing and components from a completely different sphere of hypnotic states... :) After unscrewing the cover with the Made in Prague inscription, you will see for yourself. As a Czech author, I am proud that we can contribute to the world's stars. It's possible to bring innovations even from a small country in the heart of Europe.

The offer on the market today is very diverse; you can get some inspiration in the photo gallery below the article. And maybe you, too, will be attracted by the unique opportunity to add real "good vibes" to your music. 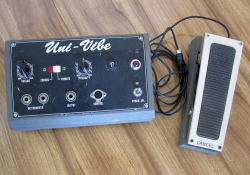 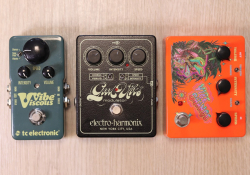 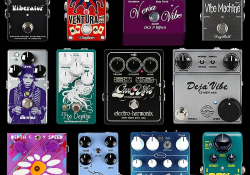 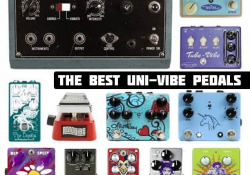 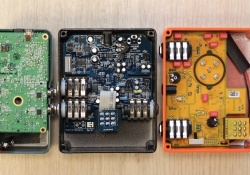 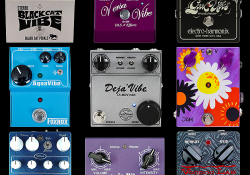