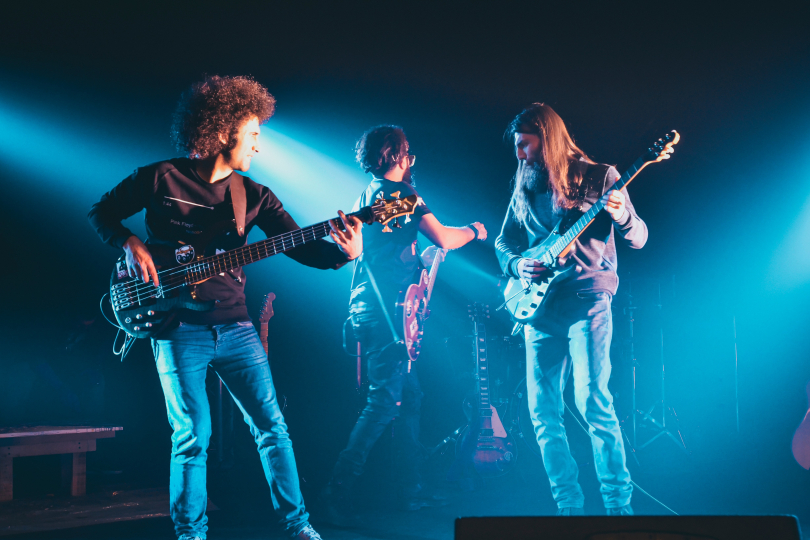 Playing in a band is not just about your slap bass lines or breathtaking solos. Interpersonal relationships matter, too. | Photo: Sam Moghadam Khamseh
mbx - Fri, November 04, 2022 - 08:00

Can you believe you wouldn't be accepted into a band because of a worn-out bass case? Or because you're too good? I experienced both of these odd situations first-hand during my first year in London when I auditioned for about fifty different bands and musical groups. But there are more compelling reasons for getting fired. Today, let's take a look at the TOP 5 types of musicians who don't stay anywhere, and in the end, nobody wants to play with them.

Being a member of a band is not for everyone. You often get into situations that are totally out of your comfort zone. And sometimes you feel like Alice falling down the rabbit hole. Hours and hours of rehearsals, endless discussions about the band’s plans and direction, long drives to gigs in often totally inappropriate vehicles – and those hard recoveries from nights spent partying. In a band, you can’t pretend to be a cool guy for very long when you start lecturing the singer about intonation or yelling at the bassist for hesitating when playing the second chorus.

A musician with very strong and firm opinions. They are clear about what the best instruments are, they use a specific brand of strings and have them shipped through customs all the way from Nepal, they know precisely what playing techniques are “allowed”, they only listen to a chosen number of bands and artists, but most importantly they are always ready to give you a personal consultation about anything. And for free!

Less experienced musicians may be overwhelmed by the charismatic charm of such personalities for a while before they realize who they’re dealing with after a time. Superman suddenly turns into a smart aleck, the magical haze of our Wise Old Man disappears, and all that remains is the desire to catapult themselves or the “aleck” into another universe.

Everything is a problem. A grumpy would answer a question with a question. Why is our fee so low? Why are we playing first? Why isn’t there a sound engineer here yet? Who’s to blame for all this? Nothing is good enough for them, they are dissatisfied and perpetually angry. A grumpy thinks everyone has somehow mysteriously agreed on a joint struggle against them. They are trying so hard, they mean it well, they’re doing their best for others, but the ungrateful ones don’t get it and instead of appreciation, they just put obstacles in their way.

A grumpy may play any instrument in a band and, surprisingly, at any musical level. It’s not about achievement but about one’s mindset and about being literally addicted to making problems.

I know a grumpy guy who even has a masochistic ritual before every gig. This person has a rather complicated set of keys, and for some mysterious reason, he always starts reprogramming all the sounds two hours before his performance, only to find out during the concert what problems he has caused to himself. Some registers are too loud, elsewhere the sound is not audible at all.

An interesting phenomenon is that he never once managed to be satisfied with his setup during the forty or so concerts we played together. After the gig, there is always the obligatory grouching about the sound and how he has to “get it right” next time.

For some mysterious reason, playing in a band attracts zombies. They come to a rehearsal, learn the songs, play the instrument – and keep checking their phones. Didn’t they miss a move on the stock market? One needs to respond to emails immediately! How did the football match go? They want to be musicians, and they probably enjoy it. Still, they give themselves away when talking about types of insurance or the importance of maintaining a five per cent economic growth.

They are aliens, intruders, cuckoos in the music world. They don’t feel the pulse, the melody, they never get goosebumps from a well-played chorus. Zombies may try to keep the beat and know it’s good to tap their foot or, at least, nod their head, but they always get lost. They love playing solos but don’t understand the concept of melody. They want to compose “cool” riffs – but everything they create sounds like a creaking door.

Where there is no soul, there is no music. Surprisingly, zombies are often collectors of high-end musical instruments, and playing in a band gives them the adrenaline rush and meaningful social contact they lack in their personal lives.

Just beware, they’re oversensitive about the temperature and measure of their pints. They know very well that a proper drinking regime guarantees professional musical performance and, therefore, never underestimate appropriate preparation in the pub. And they also know that after hard work comes hard fun. Music is not for kids, is it?

Here it is necessary to realize that practically all musicians naturally fall into this category because without a certain amount of obsession about one’s personality combined with a masochistic desire to get on stage, the profession of musician could not be practised at all.

But there is a difference in the degree of narcissism and its context. The more egomaniacal you are, the more you need success to keep the people you need around you. In that case, you’re a classic rock star – a species heading to extinction. If you come across an egomaniac who isn’t successful, though, my advice is... get out fast.

Can you think of another similar archetype of a musician with whom you would definitely not want to share a rehearsal room or a van on the way to a gig? Let us know in the comments below.

TOP 5 Myths About Music Theory That Hinder Your Musical Development

TOP 5 Dirty Tricks to Fool Any Musician
most read news