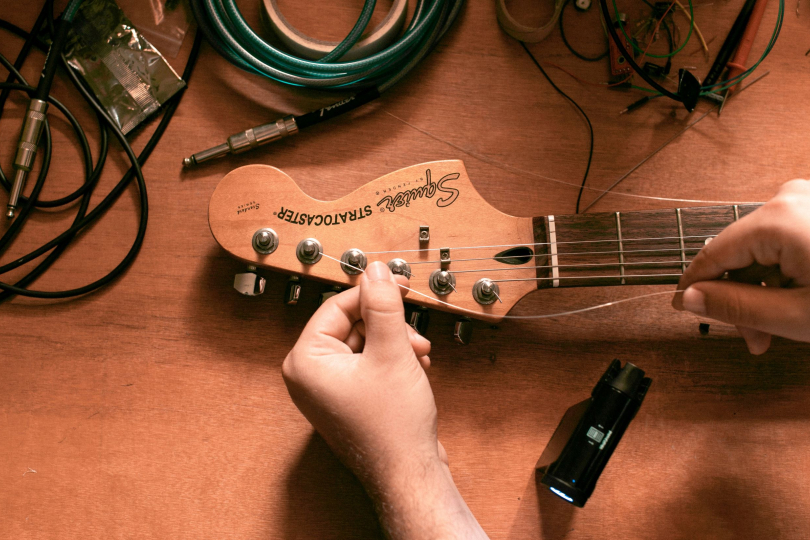 Does everything actually sound out of tune and our ears have just got used to it over the years? How much do we perceive the inadequacies of the tuning of our musical instruments? | Photo: Alexis Baydoun (Unsplash)
mbx - Fri, August 12, 2022 - 08:00

Does the interval of a major third actually sound terrible? Why should an F major chord have a different mood than a D major chord? Does everything sound out of tune because we don't know what it's supposed to sound like anymore? I recently got my hands on Ross W. Duffin's wonderful book How Equal Temperament Ruined Harmony (and Why You Should Care), which describes the history of the origins of our commonly used equal temperament tuning. I recommend it to all musicians who want to go into more depth and understand the context.

I will try to explain to you briefly and as clearly as possible what the book is about. We are musicians and we want to play, right? Not to study loads of music theory...

The entire Anglo-American-European musical tradition is based on the twelve-tone series which forms an octave. For example, if you have the note C1, there are twelve exactly equal parts—semitones—leading up to C2 (the same note, just sounding an octave higher).

Due to the even layout of tuning in this system, the so-called enharmonic substitution takes place, which means that C# = Db or Eb = D# and so on. It's always the same sound, the same tonal frequency, just written in two different ways. This system of tuning instruments and its general prevalence can be traced back to the late 18th century.

And now the shock comes: in his book, Duffin claims that the interval of the third in this system just sounds terrible—it is too high in relation to the starting tone. Since our harmonic system is based largely on layering thirds on top of each other (it's essential for chord formation), we have a problem here. So does everything sound out of tune and our ears have just got used to it over the years? What's the real deal with tuning and intervals?

The mathematical fact is that the system of equal tempered tuning is a great compromise, which is advantageous mainly in terms of its simplicity and symmetry, thanks to which the above-mentioned enharmonic substitution can work (D# is the same tone as Eb, only it is called differently).

However, in the past, this was not the case. Composers and musicians used to distinguish between D# and Eb; to them, these were two different tones—in relation to other tones, two different intervals. The note was naturally closer to D# than to Eb, which in turn was closer to E.

In the tempered tuning we all use today, the smallest distance between two notes is a semitone, but for example in the 18th-century tunings, this semitone was further distinguished into a minor or major semitone depending on its # or b. The octave range was divided into 55 commas. The interval of the major second (whole tone) consisted of five commas and the interval of the minor second (semitone) of four commas.

In the past, Leopold Mozart (yes, the famous father of the even more famous Wolfgang Amadeus), Johann Joachim Quantz, Thomas Attwood and Herman von Helmholtz discussed this in their books. Famous violin virtuosos of the past naturally distinguished in their tuning and phrasing an enormous tonal spectrum that went well beyond our rigidly established twelve semitones in the octave range.

Another strong argument against even-tempered tuning is the loss of tonality in the harmonic spectrum—in modern tempered tuning, you cannot feel the emotional difference between an F major chord and a D major chord. But in the days before the "regulation", it was a huge difference—therefore, people played in preferred harmonic progressions and keys. Musicians and listeners reacted very strongly to the change in harmony and some chords just didn't sound good in a certain harmony.

Those who tune too accurately steal the instrument's colour

"Don't be afraid of notes which seem to be out of tune when playing accompanied by the piano. The piano is out of tune! The piano with its even-tempered tuning is a compromise in terms of intonation."

Casals is referring to the fixed tuning of individual piano strings according to the rules of even-tempered tuning. In addition, the piano is always tuned according to the ear of the professional tuner so that the lower and upper-frequency bands are more or less in tune. If you were to tune each string with a digital tuner to the exact tonal frequency (where a1 = 440 Hz), you would get an instrument that sounds horrible to our ears. A paradox, isn't it? Experienced guitarists also know that they can't have every string tuned exactly to the tuner because then their chords don't fit. So they tune by ear and based on the euphony of the neighbouring strings.

Despite our efforts to quantify, summarize and categorize everything, we still have not managed to resolve the question of the ideal layout of the tonal spectrum within the octave. The piano and all the fretted instruments are limited by their rigid system, which is very clear and friendly to beginners, but which imposes natural limits on experienced, perfection-seeking artistic souls.

Think about that when you're ripping the frets off your bass. It may not take such a drastic move, but keep your senses alert and always put your feeling and hearing first.

Tuning Drums: Some Advice for Beginners
most read news