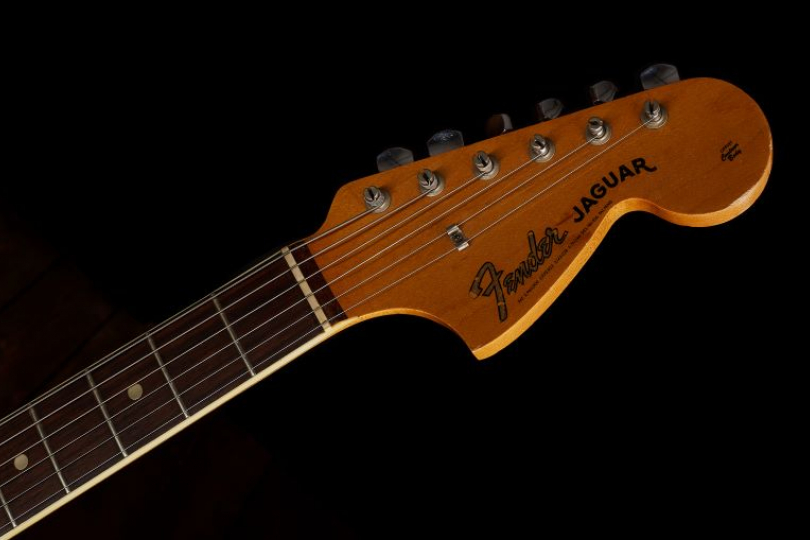 In today's episode, we'll take a look under the hood of the fourth iconic guitar made by Fender. In the early 1960s, the company came out with a new flagship guitar, their most expensive one so far. The Fender Jaguar was also the first guitar to copy the already established features of the previous models. Still, it was an innovative and unique piece that went through moments of glory and decline, only to rise again. Today, the Jaguar is a popular, classic and at the same time modern guitar that attracts players not only because of its sound and design but also because of its story.

The first four famous Fender guitars were launched at quite regular intervals. In 1951, the Telecaster was introduced (in 1950, it was the Broadcaster and Esquire), the Stratocaster appeared in 1954, the Jazzmaster followed in 1958, and the Jaguar came out in 1962. 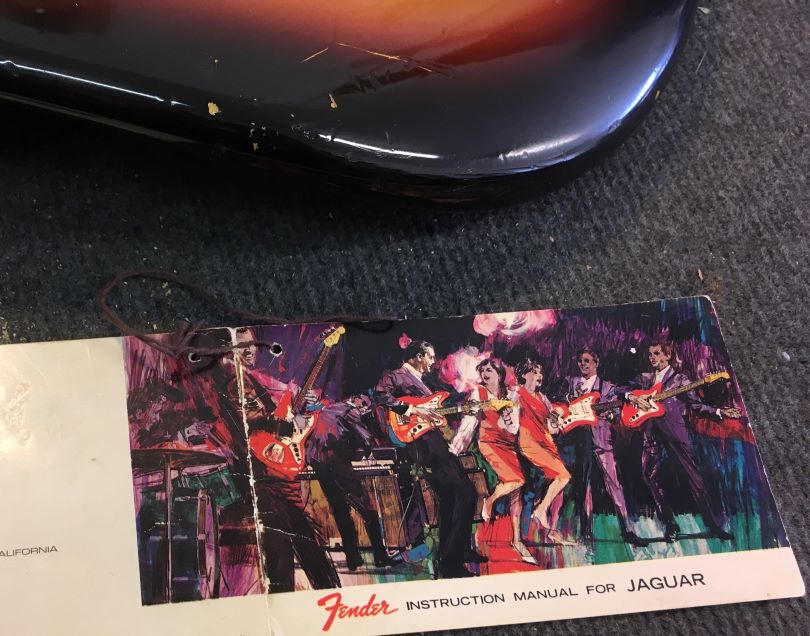 The Jaguar came to the market as the successor to the Jazzmaster model and surf rock guitarists were happy to adopt it. It was perfect for the roaring early sixties era—a lot of guitarists weren't committed to one instrument and were willing to try out different models.

The ups and downs of this guitar are nicely described in an article on the Fender website. In the late 1960s, the Jaguar (as well as the Jazzmaster) slowly began to age—unlike the Telecaster and Stratocaster which captivated a large number of players due to their timelessness.

Jaguar continued to decline in the 1970s when the company CBS took over Fender and the overall quality of their guitars decreased. In 1975, the production of the Jaguar was discontinued. However, the mid-1970s ironically brought it back to the spotlight.

Why ironically? Because soon after its production ended, the wave of punk rock came. And punk guitarists didn't want to play expensive Stratocasters or Telecasters. They wanted something less classical in appearance and the Jaguar was a perfect choice. It represented a model that had a lot of sound possibilities and, more importantly, the sound qualities that suited punk. Therefore, sales of second-hand Jaguars started to rise.

In 1982, Fender Japan started to produce the model. In 1985, after Fender was taken back from CBS by a group of former employees, the Jaguar was among the newly re-produced guitars. A few years later, the guitarists brought up by the punk era appeared on stage and among them Kurt Cobain who played the Jaguar. He fuelled the popularity of these models to the point that they were even more popular than when they had been first introduced thirty years earlier. This popularity eventually encouraged Fender to come up with the American Vintage 62' Jaguar series in 1999. Since then, more variations of these models have appeared and they have been popular with many generations of guitarists.

The design of the Jaguar was not entirely original although it has its unique elements. The body shape is based on the Jazzmaster and Bass VI models. It belongs to the family of offset guitars. It has a shorter, 24-inch scale (the Jazzmaster had a standard 25.5-inch scale). Like the Jazzmaster, the Jaguar is also very comfortable when played sitting down.

However, when played standing up, the Jaguar has an advantage over the Jazzmaster. Since the bridge of both instruments is moved more towards the middle of the guitar, the player has to keep the hand playing on the fingerboard quite far away from the body—which is sometimes really noticeable with the Jazzmaster. But thanks to the shorter scale, the Jaguar offers more comfort in this respect. According to Fender's earlier statements, the shorter scale and the neck shape allow you to play faster. But everyone has to try it out for themselves.

At first glance, you might notice Jaguar's characteristic chrome look. The electronics, pickguard and vibrato bar are pretty shiny. The wood grain on the body recedes into the background and the highly modern and sophisticated electronics comes forward.

On the one hand, Fender started producing technologically more complex models. On the other hand, the Jaguar's electronics is designed very efficiently which makes it easier to repair. All three panels of the electronics can be unscrewed and fixed in no time. You just have to learn how to navigate it because the number of wires increased significantly. For example, the Stratocaster is simpler by comparison, but to repair it you have to remove the entire pickguard which requires loosening the strings.

The neck pickup circuit is the same as the one on the Jazzmaster. You switch to it with a two-position square switch that adjusts the sound and tone. There are separate sliding potentiometers for volume and tone.

The Jazzmaster's three-position switch was replaced by a lower panel below the neck pickup. There are three separate two-position switches. Two of them are for one pickup each. The player can activate either pickup or both at once. The third switch is used to adjust the overall sound by suppressing low frequencies in favour of highs.

Below the bridge, there are the usual volume and tone controls and a jack input. Unfortunately, the latter is rather impractical—many guitarists get caught on the cable when adjusting the tone knob. It would be more convenient to put the jack in a similar place as on Les Paul guitars. 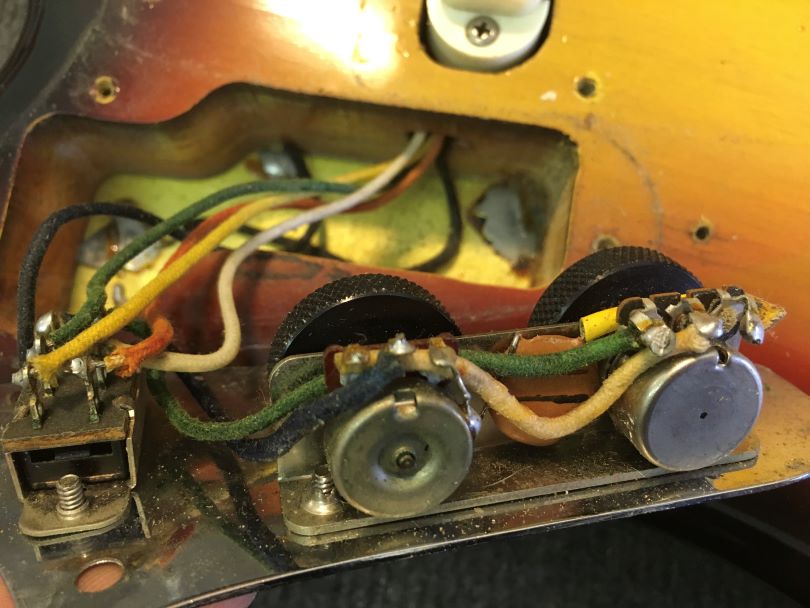 Compared to the Jazzmaster, the pickups on the Jaguar are narrower and taller. This design allows them to perform quite well and it makes them more akin to a Stratocaster. Around the pickup cap, there is a metal serrated cover that serves as a shield to suppress hum. This is the main advantage of these pickups over other models. Sound-wise, the pickups are different from the Stratocaster. Their original sound is especially popular with surf rock players.

As I have already mentioned, the Jaguar had a shorter 24-inch scale which is somewhere between the child-friendly 22.5-inch scale (Musicmaster and Duo-Sonic) and the standard 25.5-inch scale (Stratocaster, Telecaster, Jazzmaster). It was closest to the Gibson Les Paul guitars' 24.75-inch scale.

Thus, the Jaguar's scale may be attractive to players who like playing Les Pauls or to those who are not comfortable playing Jazzmasters because they are too long compared to other guitars. 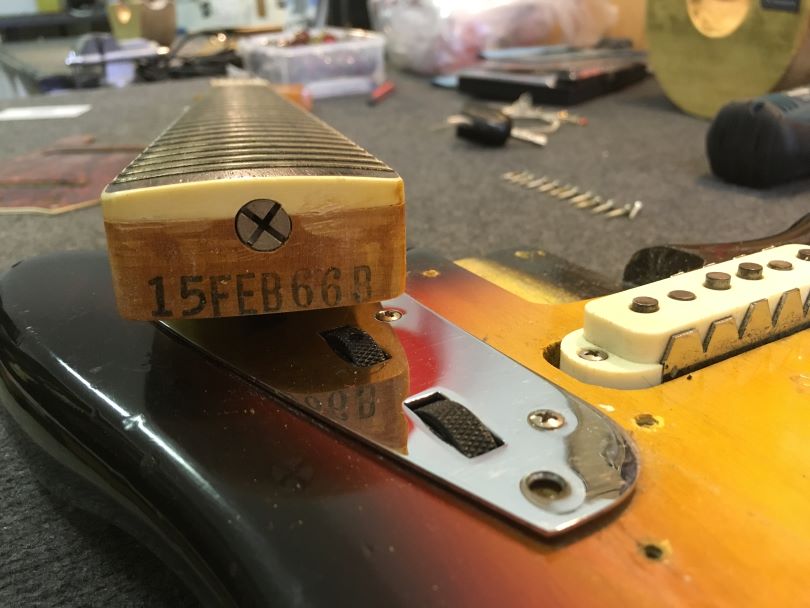 Jaguar's neck design remains true to Fender principles, only with one difference. Jaguar necks were first produced in four different widths, marked A, B, C and D. This enabled the guitarists to choose the size which suited them. (Most Fender guitars had a B neck size.) The radius of the Jaguar fretboard was the same as the other models, 7.25 inches. The fretboard had one extra fret.

There was a visible change on the head—the Jaguar was the first guitar with a different Fender logo. Until then, the so-called Spaghetti logo had been used, but on the Jaguar, the font and the thickness of the letters changed. The name Transition logo was adopted for this type because it represented an intermediate step between the classic logo and the later type of logo that was put on guitars in the CBS era. 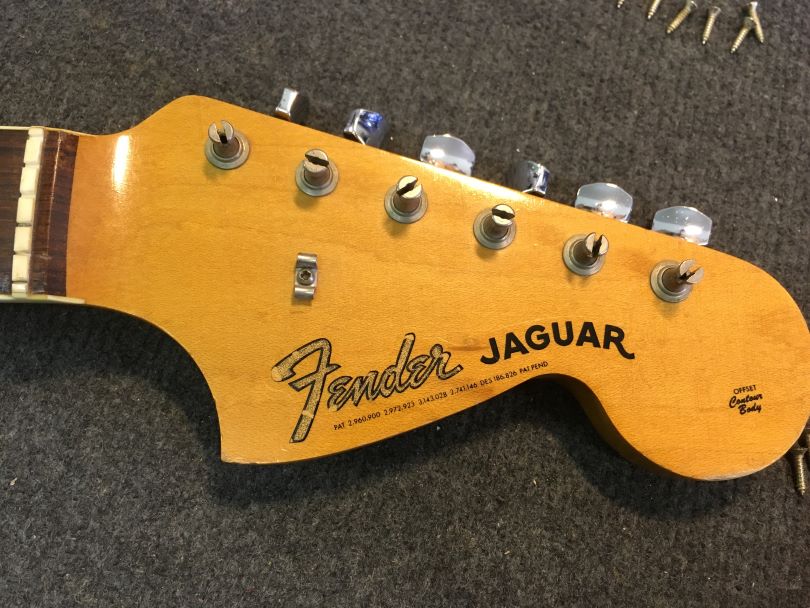 The bridge had six separate saddles, so the player could adjust everything as needed. However, the saddles were placed on the bridge which was floating on two pivot screws. The tailpiece was placed quite far behind the bridge, just like on the Jazzmaster. This resulted in low string downforce on the bridge saddles which a lot of guitarists find impractical.

The possible reason for this design is nicely and briefly described in an article on Guitarworld. The bridge and tremolo were seen by Fender as crucial to this guitar model and they worked brilliantly and accurately. It is also mentioned that the tremolo and the bridge work well with thick strings, such as 12s. Not only do thicker strings make the guitar resonate more, but they also have more tension and thus more downforce on the bridge saddles. And in the '50s and v60s, it was mainly the thicker strings that were used. Fender couldn't have known that future guitarists would be playing on much thinner strings which don’t work so well with this type of bridge.

However, there are still ways to make the bridge work well with thinner strings, especially by adjusting the neck angle or installing a better quality bridge, such as the Mastery bridge.

There is a mute underneath the bridge which players could use to dampen oscillating strings. This technique was used in surf rock but guitarists always preferred to mute the strings by hand rather than with an inserted damper. This is also why not many of the mutes on the old models survived—guitarists put them away.

The vibrato arm was long because the tailpiece was placed further behind the fingerboard. This made its control more comfortable and precise.

As we could see in the above-mentioned Guitarworld article, the Jaguar was more expensive than the previous models—it was sold for $379.50. The Stratocaster was $259.50 and the Jazzmaster was $349.50. This shows how Fender valued the new models. The Jaguar was seen as the top model from Fender's point of view. It was meant to be the next milestone in the development of electric guitars. Whether it became one, I'll let you decide.