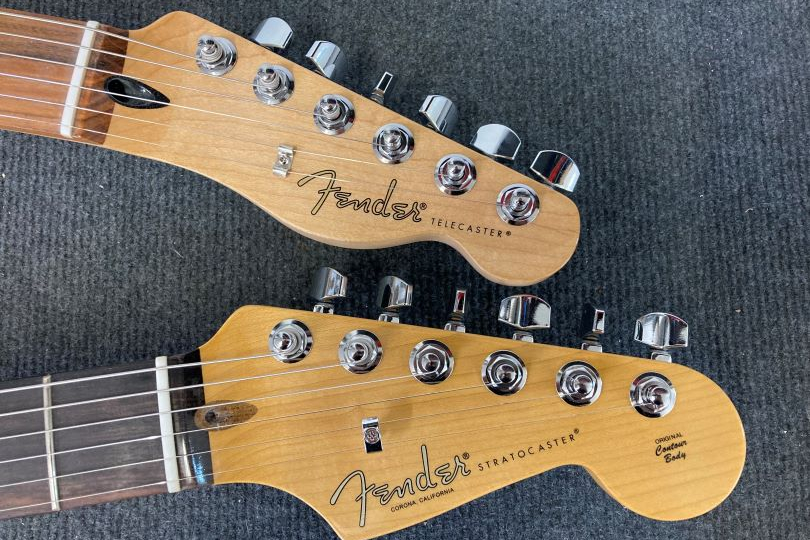 Understanding the development of such a major brand as Fender should be part of the basic knowledge of every music enthusiast.
Zdeněk Lev - Tue, January 24, 2023 - 12:00

Under the Hood #33: A Timeline History of Fender (Part 1)

The Fender brand is one of the most successful in its field. It has done so much for the music world in more than seven decades, for which it deserves not only a lot of thanks but also a reminder of several significant or remarkable milestones that have occurred during this fascinating time. By writing Fender's history chronologically, you can more easily follow the company's journey, its challenges and its greatest successes. And it's not just about guitar models and amps but also about the people who have done a great deal for Fender.

I'm sure you already have gained much knowledge about Fender's history by reading previous articles, but why not make a more comprehensive and practical summary? In this article, I'll limit myself to the early days of Leo Fender and his achievements up to the late 1960s.

In 1941, Leo Fender began cooperating with the man he saw potential in and wanted to join forces with him to develop pickups and the concept of the electric guitar. Doc Kauffmann already had made a name for himself then, and the collaboration appealed to him. From 1945, they worked under the K&F brand. However, Kauffmann soon ended the cooperation, allegedly being scared of the business failure. He even admits that he didn't have much faith in the concept of the electric guitar and its future popularity.

In 1946, after a short-lived K&F brand, Leo Fender founded Fender as we know it today.

In 1948, George Fullerton, one of the most important people ever to work for Fender, joined the company. 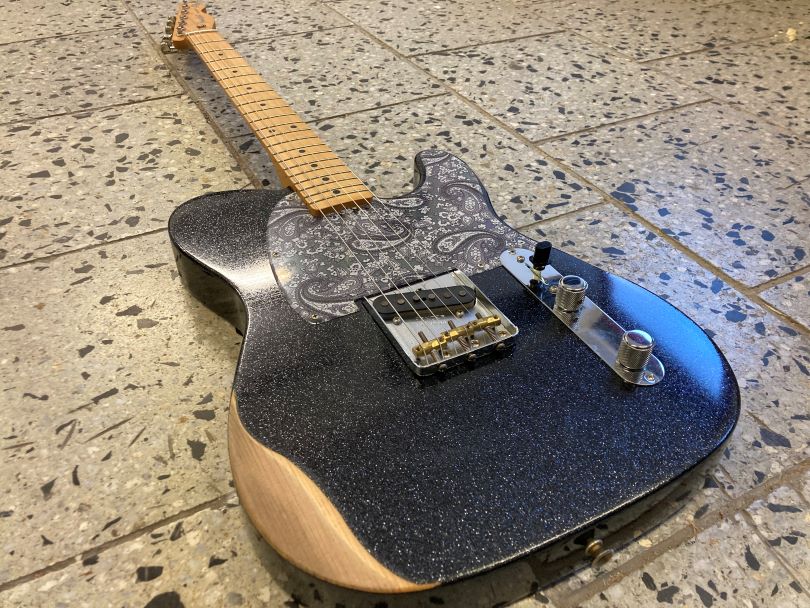 After Fender was founded in the late 1940s, Leo Fender and his associates focused on developing the electric guitar. The Esquire prototype, which was being developed at the turn of 1949/1950, first went official in 1950. It was a single-pickup version of the solid-body electric guitar. And from that moment on, the real guitar revolution took off.

But with the Esquire came its first setback. The guitar necks lacked truss rods, so they soon began to warp and customers returned the guitars. Fender quickly dealt with this and came to market with an improved model.

The Broadcaster model hit the market during the 1950s as a better version of the Esquire. It was improved with adjustable neck truss rod and a second pickup placed at the neck.

Facing troubles with the name Broadcaster, Fender had to quickly come up with another one for this guitar model. The Broadcaster name disappeared from the guitar head in early 1951 due to the fact that the same name had already been used by Gretsch. Fender wanted to avoid lawsuits, so they changed it. Guitars made in the subsequent interim period until the summer of that year are colloquially referred to as Nocasters. In the summer of 1951, the guitar's name was changed to Telecaster, reflecting the advent of the modern television age.

The second half of 1951 saw the creation of the first electric bass, called the Precision Bass. This instrument became a true icon. The uncomfortable playing of large double basses turned out to be a history for many musicians from this point on.

Another watershed year in Fender's history is 1954. The Stratocaster, one of the most popular guitars in the future, is launched and conquers the music world. It was both stylish and sonically versatile, mainly due to its three pickups and clever design. The first half of the 1950s was very fruitful for Fender indeed.

In 1954, a man who would be very important to the whole golden era joined Fender. As soon as Forrest White arrived, he began to change and streamline the factory's work processes and procedures. His first impressions rather scared him, so he took the operation of the factory to another level and did a lot of useful work for the brand. 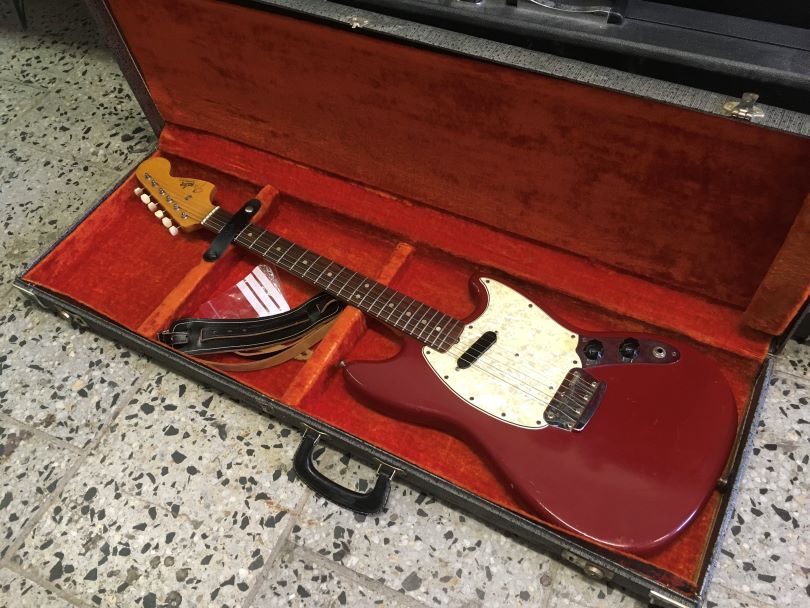 In terms of the number of models, 1956 is an interesting year, with Fender launching an electric mandolin as well as two student models, the Musicmaster and Duo Sonic.

The student models became important to Fender in terms of approaching the needs of the market, while also strengthening Fender's position in the lives of guitarists. The models were smaller in size and also had a shorter scale so that children and students could play them. They usually wanted Telecasters or Stratocasters, but they were either too big, too expensive, or both. Fender took up this challenge and won over younger customers with the Musicmaster and Duo Sonic models. There was an expectation that they would eventually buy a full-featured guitar of the brand.

1956: changing the wood used for the guitar bodies

The year 1956 was full of changes. One of these was the switch from ash wood to alder. Until this year, all models had an overwhelming majority of ash bodies. This changed and alder started to be used in most models. Only guitars with a blonde finish retained the ash, so that the nice ash grain could shine through underneath.

To make it even more full of changes in 1956, Abigail Ybarra, who would become a key person in the pickup winding process in the future, began working for Fender. At that time she was only doing minor manual work, her shining era was yet to come. This extraordinary woman remained at Fender until 2013.

In 1957, George Fullerton had a paint store mix a shade of red paint, which he then used to lacquer one guitar in the factory. When he presented it to Fender management, they largely laughed at him and responded by asking why anyone would paint a guitar red. At that time, Fender's management missed the visionary idea of coloured guitars. George kept the first guitar painted red for many decades.

In 1957, Tadeo Gomez, who was mainly involved in the production of guitar necks, left Fender. His work later became legendary and the guitars from the 1950s bearing his initials are some of the most valuable ever made. Tadeo returned to Fender in the 1960s. However, if you were expecting him to start making precision guitar necks again, you'd be wrong. This great man was hired by Fender as a maintenance man.

In 1958, the Jazzmaster, on which Fender pinned their hopes, hit the market. This model eventually made its way into different circles than its developers had anticipated. However, this did not change the fact that it was in many ways a distinctive and popular guitar model.

Until 1958, Fender used a maple neck and fretboard on all of its models. With the arrival of the Jazzmaster came a change, as it was the first model with a rosewood fretboard. This made it easier to install truss rod during production. Since 1959, a rosewood fretboard has been used for other models, too.

In the early years, Brazilian rosewood was used, which was distinguished by its beautiful colour and grain.

After a couple of years at Fender, Abigail moves on to a position that she would hold for the next few decades. She begins winding pickups, a process she would later take to perfection and her pickups would become premium and most sought after. 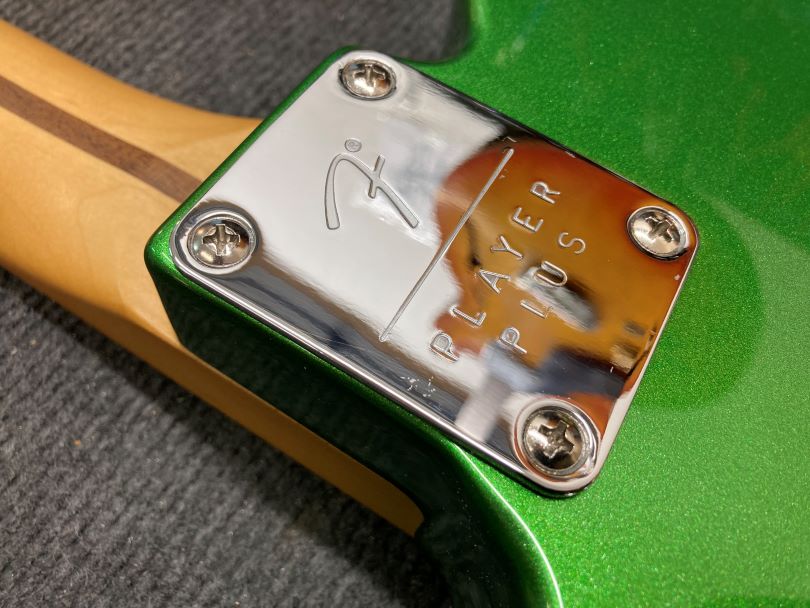 In 1960, several varieties of lacquer finishes appeared in Fender's official offer. From this year onwards, customers could have chosen from several colour options. Even though Fender had already offered the option of various paint finishes in the 1950s, it was only a custom base and at a 5% surcharge. They did not present this option in their official offer until 1960.

In 1960, Fender came up with a second bass model and named it the Jazz Bass. This model complemented or improved on the Precision's features in many ways. It had two pickups, a more comfortable neck and more sound corrections. It immediately won the favour of musicians, but again, of slightly different than the ones it was aimed at (i.e. jazz players). But that didn't matter in the end.

The Jaguar, which was seen as the top model from Fender's point of view, was launched in 1962. It had an offset design, sophisticated electronics and a distinctive pickup sound.

In 1964, the Mustang, model came on the market, as an improved version of the student guitars. It had a better bridge and differed from its predecessors rather in details.

The classic Spaghetti logo disappeared at the turn of 1964/65 to be replaced by a new logo on most models. The name Transition logo came into use because it was only used for a transitional period when the Fender brand was slowly coming under CBS. Its time ended in 1967. 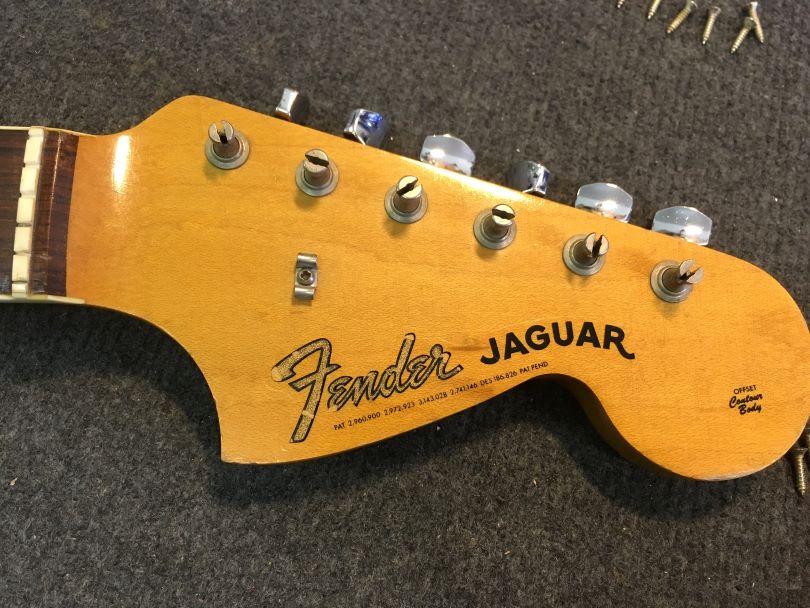 In 1965, Leo Fender sold the entire company to CBS. This marked the end of the golden era of Fender and the beginning of the new CBS era, judged mostly negatively by the history. Fender became enveloped in corporate practices, which was reflected in the quality of the guitars. Costs were reduced, product quantity increased and production time decreased. Fender guitars therefore reached many more customers, but at the cost of a loss of quality.

1965: Indian instead of Brazilian rosewood

In 1965, Indian rosewood began to be used, which, although less attractive to many collectors, was still a very beautiful and high-quality wood.

In 1965, George Fullerton retired from Fender. He left behind an indelible mark and left at a time when the golden era of Fender was coming to an end. But he would have joined forces with Leo Fender again in the future to develop G&L guitars.

The year 1967 saw the introduction of the Bronco model, a single-coil guitar from the offset family. It had a single pickup at the bridge, making it the opposite of the Musicmaster. It was an interesting model, a bit unjustly forgotten today. It was made until 1981.

In 1967, Forrest White left Fender as a factory manager.

In 1968, the logo used by Fender changed. The Transition logo ended and was replaced by a more distinctive one, called CBS logo. It was black in colour and in comparison to the previous ones I don't find it very impressive.

1968: the end of nitrocellulose lacquer

The year 1968 saw a significant change in the finish of the guitars when nitrocellulose lacquer was replaced by polyurethane. Many collectors and enthusiasts find this change as the end of the quality provided by Fender guitars.

So that's where we'll end our timeline summary for now. In the next part of our series, we'll continue with the key events that shaped the Fender brand in the 1970s and 1980s.

Under the Hood #32: How to Upgrade Old Japanese Fenders and Their Copies

Under the Hood #31: The Almost Forgotten Fender Bronco

Under the Hood #30: Fender Musicmaster a Duo-Sonic

Under the Hood #29: Stratocaster Then and Now
most read news