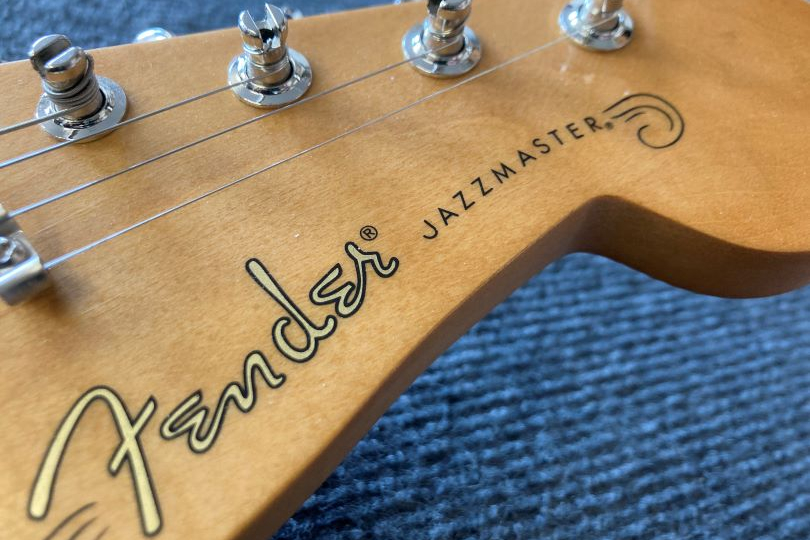 Jazzmaster was an original, modern guitar that once again came up with something new and broke stereotypes.
Zdeněk Lev - Thu, May 19, 2022 - 08:00

It was supposed to be Fender's flagship. It was to replace the Telecaster and the Stratocaster. It was to become the jazzman's main instrument. Ironically, it became something else entirely. In the late 1950s and early 1960s, the Fender Jazzmaster began to make its unique way into the music world, where it would gradually become an icon. What is interesting about this guitar is not only its story but also its unique construction. Let's discuss both in more detail.

Rock'n'roll was getting into full swing, Leo Fender was slowly rising into the limelight with his guitars and amps, and he was wondering what to do next. The Telecaster and Stratocaster were gaining ground. More and more musicians wanted these instruments. Both models lacked nothing, were brilliantly conceived, simple, modern and, as it turned out later, timeless.

But not everyone wanted these guitars. There were still many musicians who preferred something different, proven, or simply didn't trust the new Fenders. That's why Fender wanted to move one step forward again, to a new and more "serious" target group—jazz musicians.

Among guitarists, jazz players were treated differently than others. They seemed nobler, more serious. Their main instruments were already established, but Fender wanted to introduce them to something different, something new. And one of the important criteria in the process of development was the fact that jazz players were mostly sitting down, playing with a different technique and expecting a different sound. 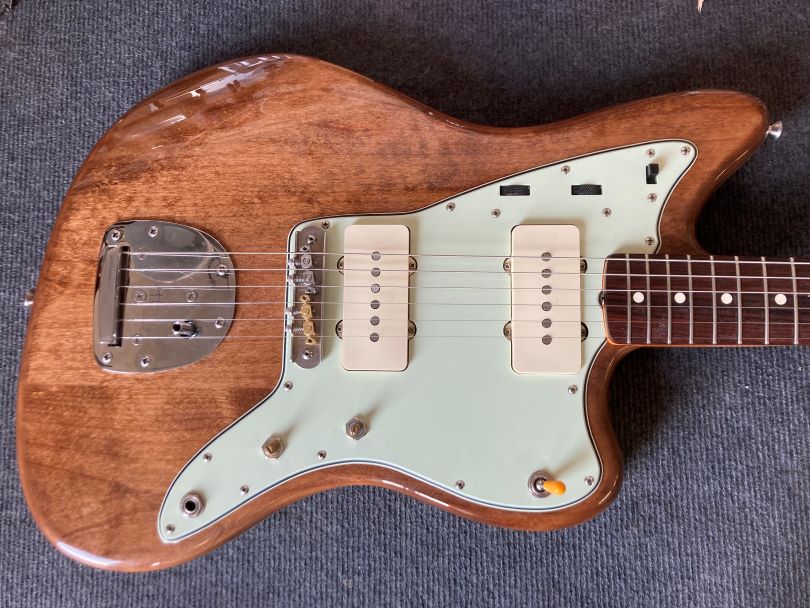 What brought the new Jazzmaster to attention

In 1958, a new model of Jazzmaster was introduced. It was different from other Fender guitars. Its shape was based on the Musicmaster and Duo-Sonic student models and it didn't resemble the Telecaster and Stratocaster guitars at all. So one thing was clear: it was an original, modern guitar that once again came up with something new and broke stereotypes. Which is Leo Fender's philosophy in one sentence.

The body shape is asymmetrical and elongated, which is why the Fender Jazzmaster is classified as an offset guitar. Combined with a 25.5-inch scale, it is a relatively long guitar. These characteristics make the instrument comfortable to play sitting down.

It was the first Fender guitar with a rosewood fingerboard. Until then, necks were made of one piece of maple. The new fingerboard material gave the guitar a new and very pleasing look. In those years, Brazilian rosewood was still used, which was characterised by its reddish colour and really beautiful grain. It gave the instrument a more luxurious feel.

The more serious look was also achieved by the original gold-coloured aluminium pickguard in a shape that enhanced the curves of the body. At the same time, it incorporated dual-circuit electronics, which was also something completely new.

The pickups were designed differently. They were shaped like a bar of soap. There were two on the guitar, and for each one, the guitarist could choose a unique sound setting.

The bottom horn under the fingerboard was reduced compared to the Telecaster and Stratocaster. But it wasn't just an ingenious design feature. The shortened and rounded corner of the guitar body provided plenty of extra hand space when playing in higher positions. On a Telecaster or Stratocaster, while there is also plenty of room in the higher neck positions, there are times when the hand starts to rest on the horn and movement is restricted. This was not the case with the Jazzmaster—it provided more comfort when playing all over the fingerboard.

But somehow, the target group was not very interested in this model. What was the reason? 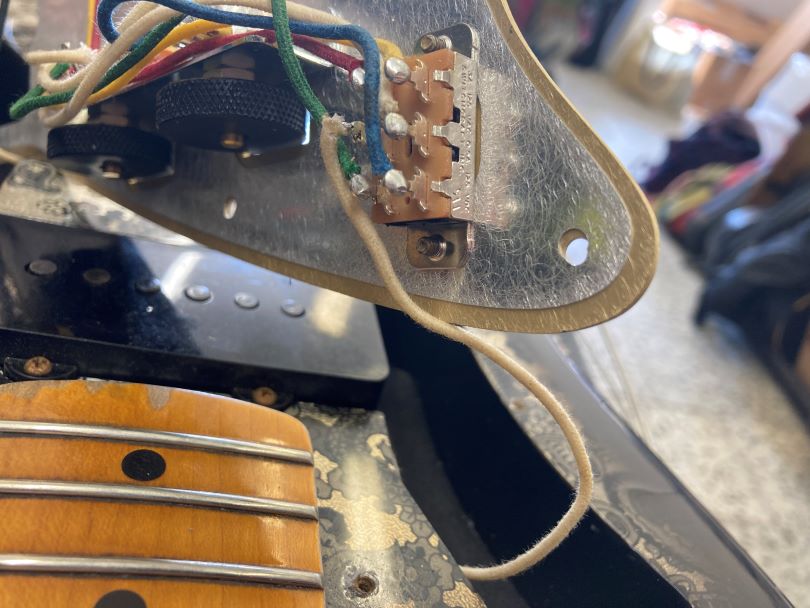 It's a frequently asked question to which there is no clear-cut answer. Why didn't the Jazzmaster catch on with jazz musicians? And why did it catch on elsewhere? A nicely articulated explanation is provided in this article by Fender itself.

The reasoning is that the jazzmen did not ask for a new instrument. They were used to their electroacoustic hollow body guitars and their sound. It's important to remember that jazz players at the time were mostly veterans used to something that was already established. They didn't need to look for something new. What they had was perfectly satisfactory.

Another interesting perspective is that the Telecaster and Stratocaster were designed so brilliantly that they could hardly be matched at the time. So the new Jazzmaster model did not entice professionals to buy when Fender had two other excellent models on offer. The Jazzmaster may have been innovative but it was still not a top model that would outperform the Telecaster and Stratocaster and that would convince jazz players to drop other instruments and play it exclusively.

But Fender didn't have to despair. The Jazzmaster took a liking to another, different and completely unexpected group of musicians. The advertising campaign impressed teenagers. When The Ventures recorded the hit "Walk, Don't Run" in 1960, the die was cast. Jazzmaster rode the wave of surf rock.

If you listen to this song with the video, notice the instruments the musicians are playing. Precision bass, Stratocaster—and Jazzmaster. The Stratocaster plays the accompaniment, the Jazzmaster plays the melody line with the help of a vibrato bar. The Jazzmaster's sound is softer and more pleasant. The vibrato bar is long and easy to manipulate in this style of playing. Thanks to its length, it feels soft and can be controlled easily. After a few minutes of practice, you'll get the hang of it too.

This sound became typical not only for Jazzmaster but also for the whole surf rock genre. The younger generation wanted to sound the same, so the Jazzmaster took hold and became a really popular model of the time. 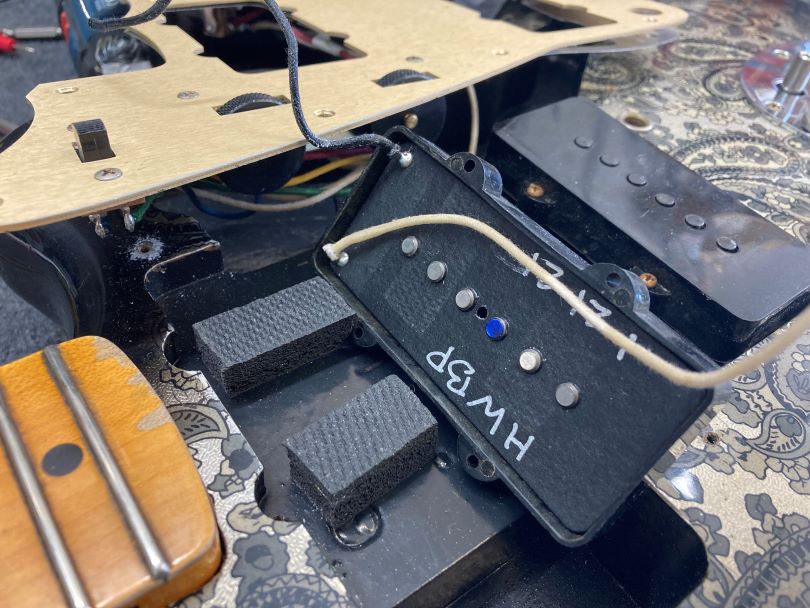 At first glance, the electronics in the Jazzmaster doesn't look particularly complicated, and indeed it isn't complicated at all. It is sophisticated. The controls above the neck pickup, which comprise two sliding potentiometers and a two-position toggle switch, play an important role.

When the switch is switched to the upper position, a separate circuit for the neck pickup is activated. The pickup is activated at that moment, while the bridge pickup is completely disabled. There are sliding potentiometers for volume and tone. Many people will wonder what the point of this is when the same potentiometers are also down below the bridge pickup. There are two main reasons:

The Jazzmaster thus allows for an interesting combination of neck pickup sounds. To give you an example: you can set the volume and tone to the same positions on the upper and the lower bout. Then switch to the neck pickup on the three-position pickup switch. The result is a very specific sound. However, when you switch to a separate neck pickup circuit, the character of that pickup sound changes. Even if the potentiometers are set the same. It is the different potentiometer values that make this possible. And that's the magic of two separate circuits.

The disadvantage of the upper horn electronics is the rather impractical and slow turning of the sliding potentiometers. It's a good idea to set them to the desired position before playing, as it doesn't quite work well at high speed when playing.

If you have the top switch in the lower position, the classic electronics circuit located at the bottom of the body under the pickups is activated. There are volume and tone pots and a three-position toggle. The circuit operates in the same way as on a Telecaster. The three-position switch activates the pickups either individually or both at the same time. 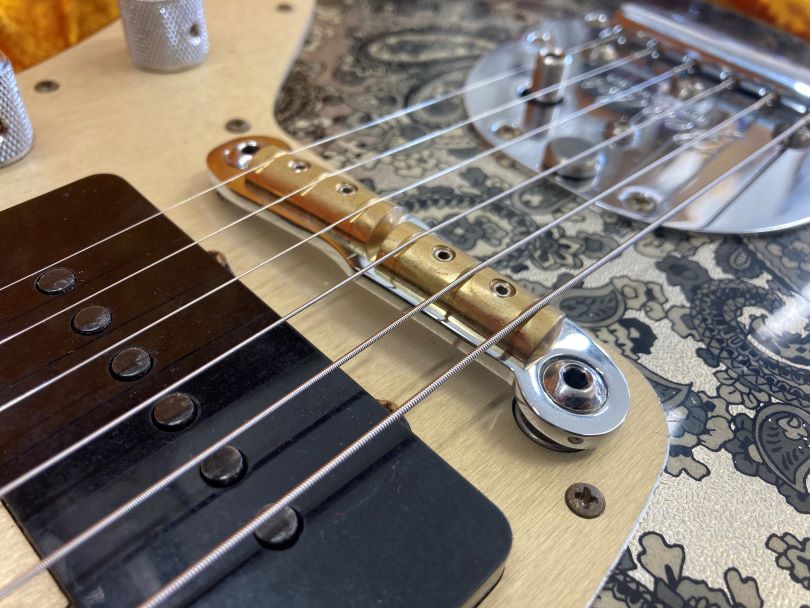 String angle on the bridge and the vibrato

A new feature of this model was the design of the vibrato system, which was called floating. It was located on the front of the body, with its mechanism hidden under the cover—unlike the Stratocaster where the vibrato block ran through the entire body and the springs were anchored to the back of the body.

The vibrato bar is much longer than the Stratocaster's due to its placement behind the bridge. This design makes the manipulation smoother and more precise which works well in surf rock. You can play and still have the bar comfortably in your hand.

The whole construction causes low downforce of the strings on the bridge. The strings are anchored in the tailpiece quite far behind the bridge. Because of this, they can't exert as much downforce as on a Telecaster or Stratocaster. The sound is softer because of the lower tension. However, with more aggressive playing, it is easy for the string to pop out of the saddle groove.

Therefore, the Jazzmaster must be played with respect to the construction of the instrument. You have to adapt your playing to the lower string downforce on the bridge and play more gently and sensitively. However, when using thicker strings, the sound is really great. 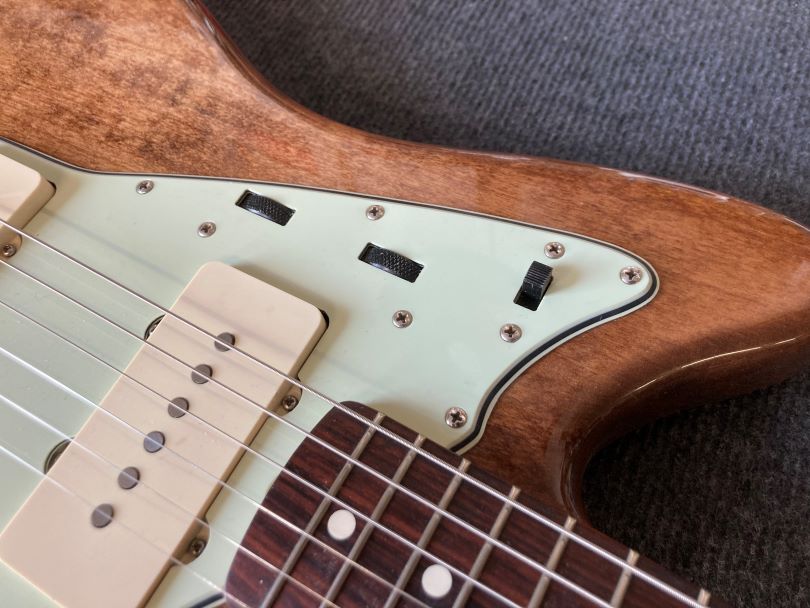 The first phase of the Jazzmaster production lasted until 1980. The sixties marked the great progression of this model and its journey to the top. In the 1970s, its popularity declined, partly due to the position of CBS, the company that owned Fender and during whose era the quality of all Fender guitars dropped. Less popularity made the guitar more affordable though.

In the 1980s, when CBS sold Fender mostly to former employees who wanted to bring the brand back to prominence, the Jazzmaster began to be produced as a vintage model in the Japanese production. It continued to be produced until the late 1990s.

Nowadays, you can buy more Jazzmaster models from Fender, modified in all sorts of ways, but the principle remains the same. It's simply a very popular and unique instrument.

Tagy Under the hood Fender Jazzmaster