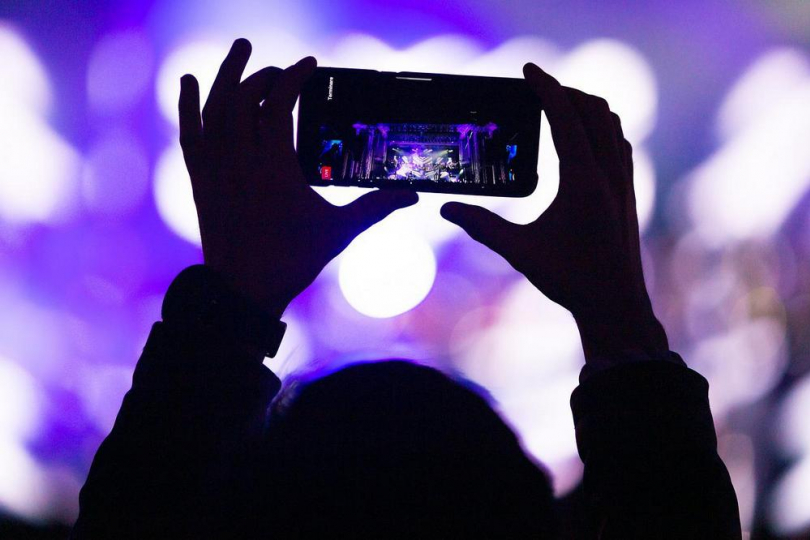 Are you an enthusiastic music fan? Do you buy tickets for your favourite bands in the first wave of pre-sales and take a holiday around the date of the concert? Do you arrive at the venue several hours beforehand to seat yourself in the most convenient place where you can see the players' fingers and hear well at the same time? Or are you the typical concert jerk who doesn't care much about the music but manages to ruin the dream concert for others in the audience? Then maybe you know the following five rules—or you can add more tips to your list.

No one can get an avid music fan out of his privileged place—that is, no one but you. At least, you can try—for example, you can crumble chips on their back or discuss the result of last night's football game during the quiet part of a song. You can also stand in front of them and block their view with your mobile phone (on which you won't be able to see or hear anything anyway).

Also, invite your sweetheart to the concert and show them your affection by nudging everyone while hugging them. Generally, if you squirm enough, there's a good chance you'll make the poor music lover leave their spot and go to the back—to the sound engineer where the sound is better anyway, or straight to the bar for a nerve-calming drink.

2. Make it loudly clear that you are an expert

It's great when the audience actively responds to the musicians. An uninterested crowd where everybody stands around like fence posts have never inspired a performer to a thrilling solo. That's why it's important to yell over half the mosh pit applauding "Woohoo!" every time there's a spectacular passage in a song or even a stupid modulation up a semitone. After all, you have to show that you understand the music and have noticed the joke.

The amused loud laughter of a connoisseur after a "totally unexpected" stop or after a musical quotation of a well-known song also works well. Especially at jazz concerts, there are always a few of these posers—you won't be alone.

At rock concerts or festivals, it is crucial to sing all the songs along with the band—ideally completely out of rhythm and tune, with mangled lyrics and so loud that others around you will get nothing from the performance on the stage.

3. Shake not only your head but also your beer

It's a real shame that the days of disposable cups flying through the air are over. The audience in the front rows is completely sweaty anyway so a little shower of that half-drunk beer would only do them good. Nowadays, everyone keeps a close eye on their refundable cup of bliss—even more so when dancing. But it's hard to keep the beer level straight when you're shouting wildly. However, as you were told on your first canoe trip, the basic rule is to hold the paddle at all times, even when the boat is leaking.

And if you do decide to put your beer down for a while, don't forget to place the cups and glasses on the edge of the stage, ideally five centimetres away from the guitarist's pedalboard.

4. Seduce, harass and make out

The couple from the first point of this article belongs to this category too. If your partner is bored and not making enough noise during the concert, start kissing and making out furiously. You'll have a sexy date experience where "some music" was playing in the background, and the poor, avid fans will probably beat a hasty retreat in disgust so that they don't have to watch you.

Sexual harassment is not cool anymore and so is going to crowded concerts to "inconspicuously pass through" the crowd and grope for people. It's much cooler to aim higher—try sneaking into the sound guy's pen to impress him and convince him to take you backstage to the star of the show. After all, he's just standing at that desk the whole time and has nothing to do.

This type of spectator awkwardness is suitable for individuals who are willing to beat a hasty retreat themselves. For example, inappropriate boisterous clapping in the middle of a jazz solo might urge even distinguished jazz fans to show you out.

And if you want to measure your strength with otherwise good-natured death metalists, try to impose your hard rock manners in the middle of the mosh pit—for example, do cartwheels or swing your fists. Or start zigzagging against the direction of the circle pit just when everybody is marching along and looking very happy about it. They will almost certainly push you out of the circle and make it clear that you are not going to assert yourself here.

It doesn't really matter how you choose to irritate the audience. Be creative—sometimes you just need to smell a little. Or chew gum loudly. Or have a giant straw hat that no one can see through. The possibilities are endless. There's always someone you can really piss off.

Just remember: to hell with the music, you came here to have fun! And the passionate music fan of any genre should get stuffed and go to the back. After all, he can get a closer look at the guitarist's fingers at home in a YouTube tutorial.

And what kind of gig jerk is your "favourite"? Let us know in the comments.