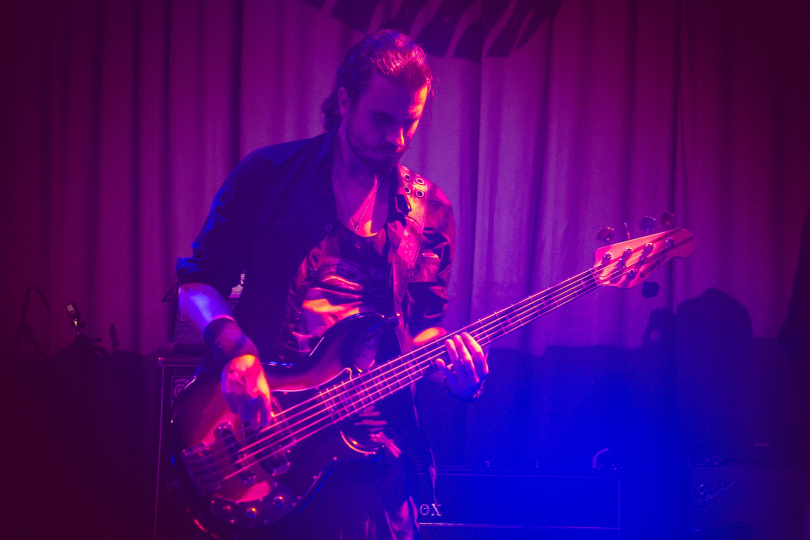 Oh yes, I am a huge fan of Chris Wolstenholme, the beating and grooving heart of beautifully successful space rock divas Muse. His bass lines are challenging, dirty (due to a lot of fuzz and synth vibes) and always very clever. One of the most popular bass covers is Hysteria and you can hear why. The whole song is driven by a sixteenth-note constant badass riff, only to become even more challenging in the chorus.

Producer Rich Costey, who has worked with Muse on several occasions, describes the main feature of Chris Wolstenholme’s playing style: "His finger strength is staggering ... He hits the strings really goddamn hard. It sounds that way because that's the way he plays." And that’s the way I play bass too… so Chris is obviously a big source of inspiration for me.

There are many aspects of Wolstenhome’s playing which are very inspiring and today our focus will be on the Uprising bassline.

First of all, we’ll use the D minor harmonic scale notes throughout the whole song (D, E, F, G, A, Bb, C#). This tonal material is so typical for classical music and for Muse harmonies. Matt Bellamy loves the epic sounds of harmonic minor scales in chords and melodies.

The bass line is played in octaves in a shuffle feel and the ‘synthy’ character is due to an octave effect which is doubling each tone an octave lower.

The harmonic structure is quite straightforward: 2x D, 1x G, 1x F, 2x A, 1x G, half bar F + half bar C#. This is your template. Look out for the little passing G# note when going to A from F. The passing semitones through C# and G# create a very elegant and classical vibe in the harmonic structure.

This is great practice for your octaves and tone consistency; pay attention to every note. 5-string bass owners are encouraged to play the whole bass line on their B string (in that case, there is no need for an octave pedal).