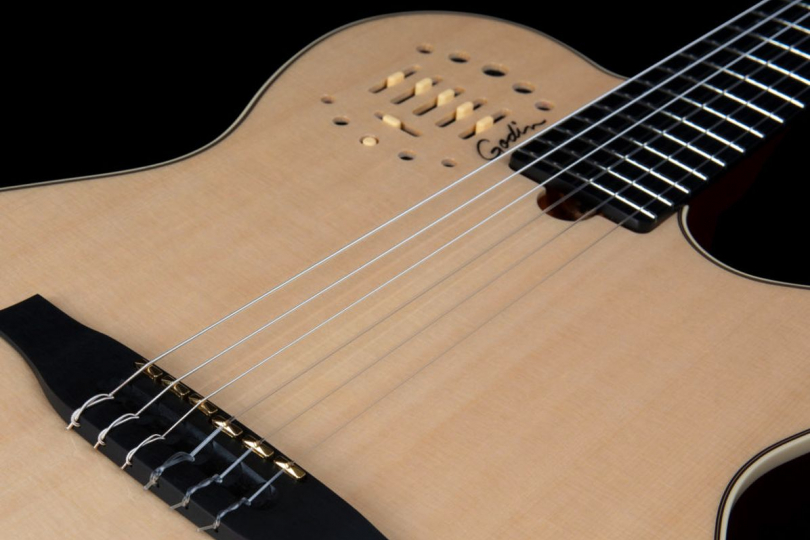 The Godin Multiac hybrid guitar has been one of the Montreal-based brand's most popular models for several decades. Now this flagship nylon-string guitar is back in a new updated version: the Godin Multiac Nylon Deluxe. In developing it, the manufacturer took everything that made the original Multiac unique and incorporated a new LR Baggs preamp, custom-designed to detailed specifications. This innovative system has a dual-concept design that allows the signal from six separate HEX sensors and a Lyric microphone to be combined.

A mahogany body with a pair of resonance chambers, designed to eliminate any feedback, is complemented by a spruce top. A one-piece mahogany neck is attached to the body via an ergonomically shaped joint using four screws. The 16-inch radius fingerboard, made from a Richlite blend whose properties are akin to classic ebony, carries 22 medium-thick frets and a 48.3 mm wide GraphTech nut.

The instrument, with a standard 25.5-inch scale length, features a headstock based on the design of classical guitars, which is fitted with open-gear tuning machines, white tuning keys and a tuning ratio of 16:1 tuning. Richlite material has also been used for the base of the bridge, which is embedded with six HEX sensors that pick up each string individually, providing a clear, well-defined, and dynamic sound.

The newly integrated internal microphone Lyric is placed under the soundboard, so it picks up both the natural sound of the guitar and every rhythmic hit on the soundboard, allowing all the subtleties of right-hand percussive technique to shine through. The ability to blend these two sound sources and correct for them through the LR Baggs active preamp makes the Multiac Nylon Deluxe an extremely versatile guitar that players of flamenco, pop, and other styles will appreciate in any acoustic space.

The aforementioned preamp, powered by a 9V battery concealed in a plastic shaft on the back of the body, provides clear control of the resulting tone, which can be adjusted with a phase switch and six slide faders tied to a three-band EQ, overall volume, a Saturation function to add a warmer timbre to the sound, and a blend control for seamlessly mixing the Lyric microphone with other pickups.