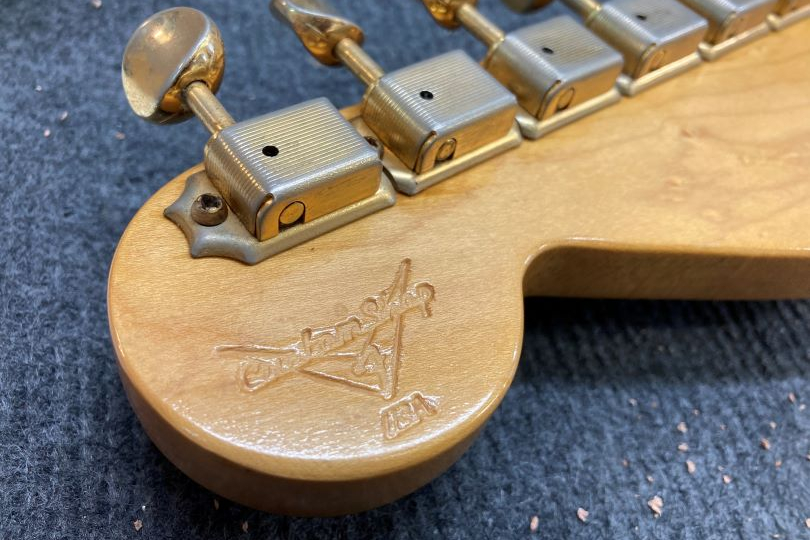 Why would you have a new guitar built and then have it battered to look like it's sixty years old? That's exactly what the first reactions were to the idea of making vintage guitars. But at the same time, the demand for such instruments was long-standing and slowly increasing. Before the concept was fully embraced by the Fender Custom Shop, it had taken quite some time when only a few now-legendary enthusiasts were ageing guitars.

Ideas for minor guitar ageing appeared already in the 80s. The reason was to make the instrument more attractive or to make the new and repaired part of the guitar visually compatible. But another motive for ageing was also a fraud, where a new guitar was passed off as an old and valuable one.

So the concept of ageing new or not that old guitars was not brand new at the time of the Fender Custom Shop's inception. But it was the guys from Fender who later decided to take guitar ageing to a very high level. And combining this concept with a famous brand meant the creation of something new, attractive and, most importantly, something that was in great demand. 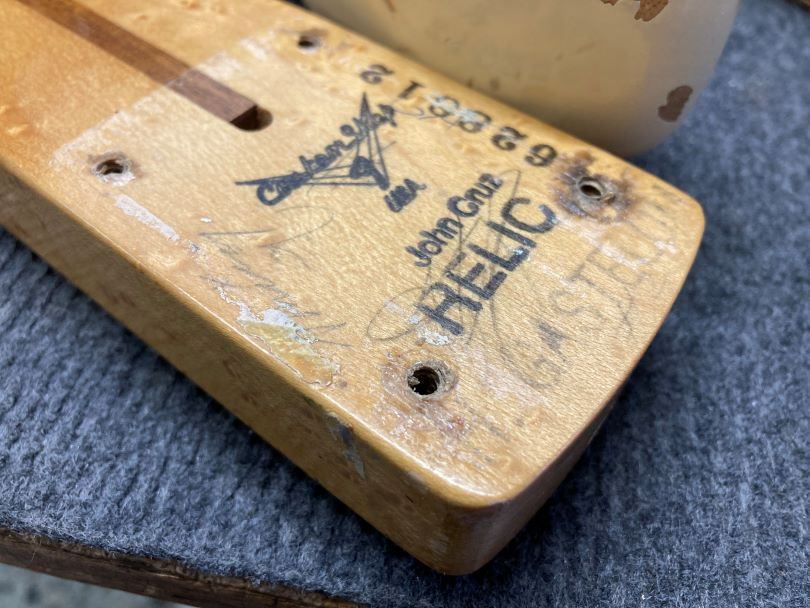 Two enthusiasts and a time machine

However, the first aged components started to be created in Fender with the help of a person who didn't actually work there but was given individual parts to be aged. That enthusiast was Vince Cunetto. But before we get to him, let's go back a few years, to 1989, when J. W. Black joined Fender.

These two guys are at the beginning of a concept that is now called Time Machine in the Custom Shop. They are models of guitars that represent the glorious eras of the 50s, 60s and 70s. They are made with an emphasis on quality and old manufacturing processes and, primarily, they have several wear categories that give them a unique touch of something special.

The story of Vince Cunetta and J.W. Black is very nicely detailed in Dave Hunter's article. For example, he talks about the beginnings of their guitar work. Black had his own guitar repair shop in the 1980s. Coincidentally, he worked in the same building as the well-known vintage guitar dealer Jim Colclasure, whom Cunetto also knew through his guitar work. Later, Black cooperated with John Suhr. At that time he worked on several guitar ageing jobs. In the late 80s, he got into Fender, where he started with the Custom Shop.

How does Cunetto come on the scene? Through their mutual friend, Jim Colclasure, of course. He, according to the article mentioned, brought Black to Cunetto's workshop to introduce them to each other. Cunetto has long been interested in ageing guitars and all guitar hardware. Black, by then an experienced guitarist, was impressed with the work he saw there.

Before long, Cunetto was supplying Fender with authentic replica guitar headstock decals for custom guitars. In time, pickguards were added. Logically, the idea of building an entire guitar in the relic style was born. According to Cunetto, the whole idea was based on the simple reasoning that if people were buying old furniture, beat-up jackets and jeans, they might be interested in aged guitars. And he was right.

The story is illustrated in an excellent article by Antonio Calvosi, where the idea of starting relic modifications on a grand scale is described. Until the early '90s (some time since 1989 when he started working as a master builder in the Custom Shop), Black had no orders for relics. Then came a meeting with Don Was and his request for a relic bass to perform with Bonnie Raitt at the GRAMMYs. The reason was simple: Don Was didn't want to play a bass that looked like a new pair of sneakers. He wanted something more stylish. The result was a success.

Subsequently, Cunetto showed his relic work to John Page, who was then head of the Custom Shop. He liked the work. The result was a plan for Black and Cunetto to prepare two prototypes for the 1995 NAMM show. These were a classic yellow aged Nocaster and a 1957 Stratocaster in two-tone sunburst. However, the Mary Kaye Stratocaster with gold hardware was chosen instead. John Page did not want to tell anyone about this project and kept everything a secret.

Both guitars were on display at the NAMM show in showcases. Because of their old appearance, everyone assumed they were authentic models from the 1950s. After word got out that these were new guitars with relic finishes, orders started pouring in. Fender management immediately embraced and supported the idea. 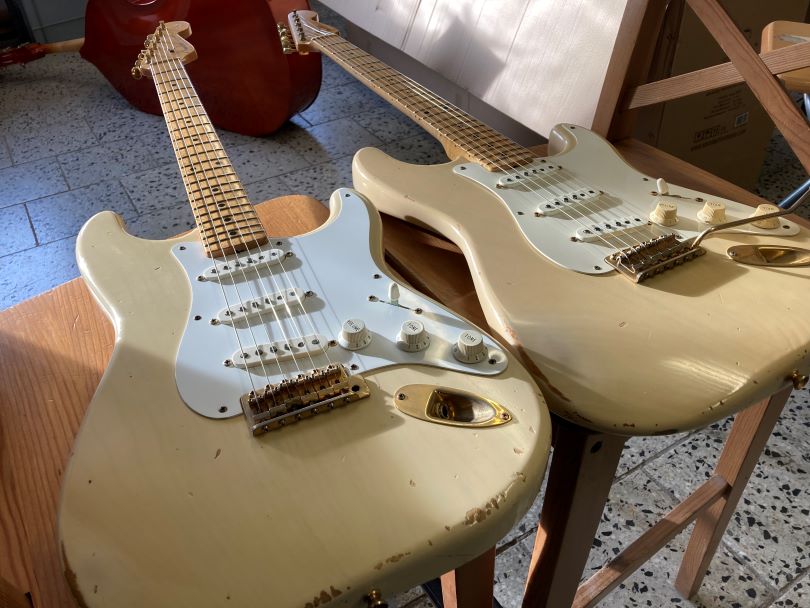 At this time, however, Fender was not allowed to use nitrolack in production, which was essential for relic finishing. So he chose the temporary solution of having Vince Cunetto do the relic finishing on the guitars and hardware externally in his workshops. One of the reasons was the high quality of Cunetto's work.

So in practice Fender supplied Cunetto with boxes of parts containing bodies, necks, pickguards and other hardware. Cunetto and his people in the workshop aged the parts and then assembled them to make the guitar look as good as possible. Everything was then sent back to Fender, where the rest of the work on the guitar was completed, such as fretting, tuning and so on. The body of the guitar had the "Relic" branding stamped directly into the wood to distinguish it from other models and from plagiarized guitars. So in 1995, the Relic series began, starting with twenty Nocaster guitars.

At the end of the 90s, Fender got the necessary permits needed to produce relic finishes using nitrolack, trained its own staff to age the guitars and from that moment on, entire models were produced at Fender.

The Cunetto era associated with Fender ended with the last batch of guitars in 1999, but not in a bad way. Cunetto had counted on this, knowing that everything was just a temporary thing until Fender could get the facilities and the necessary permits for production. At the same time, as a pioneer, he became a legend, and the models with his modifications from the second half of the 1990s are still the most treasured relic guitar pieces from the Fender Custom Shop.

I had the opportunity to play two Mary Kay Stratocasters from the Cunetto era from one particular year and disassemble them to parts during an inspection. My impression was clearly positive: high-quality work, great sound, excellent playability. Each guitar was a little different, with slight variations in neck and body dimensions. Sound-wise they were different, but both were great. In short, I'd give them twelve out of ten. 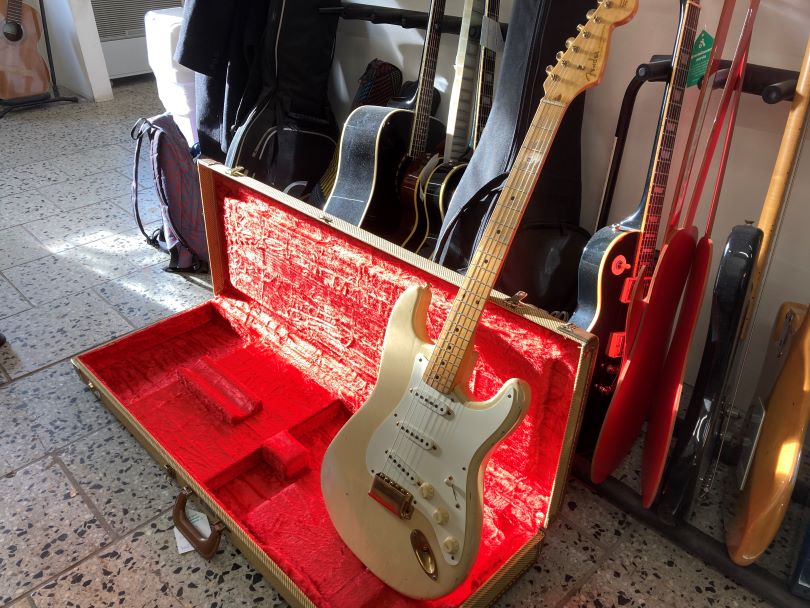 Since the 1990s, variations of relic adjustments have continued to evolve. Today, it is possible to choose the exact look of a guitar according to various criteria – from a well-preserved look to a heavy relic finish designed to mimic decades of gigging. These categories are well described on the Fender Custom Shop website.

This finish presents the guitar as if the first owner put it in a suitcase after buying it in the 1950s, and you would take it out today in the same condition. The models look new.

This finish shows the guitar in a condition where the owner played it only minimally, took good care of it, and then put it away for many decades. The lacquer on these guitars tends to be cracked and not as shiny. The pickguard is slightly yellowed, and the metal hardware shows slight oxidation.

The model in this arrangement presents a guitar that was played at home or in a studio and only occasionally, but with multiple owners. Hardware is matte, scratches and slight damage appear.

This is presented as authentic wear and tear from regular clubbing. There are scratches in the lacquer all over the body, including the neck and hardware, which tell the guitar's long story.

This modification is the most distinctive of all. It represents a guitar that has been actively played and toured for many decades. During that time, it suffered a lot of damage to the paint, the wood and the hardware. The lacquer is worn through to the wood in places, giving the effect of authenticity. 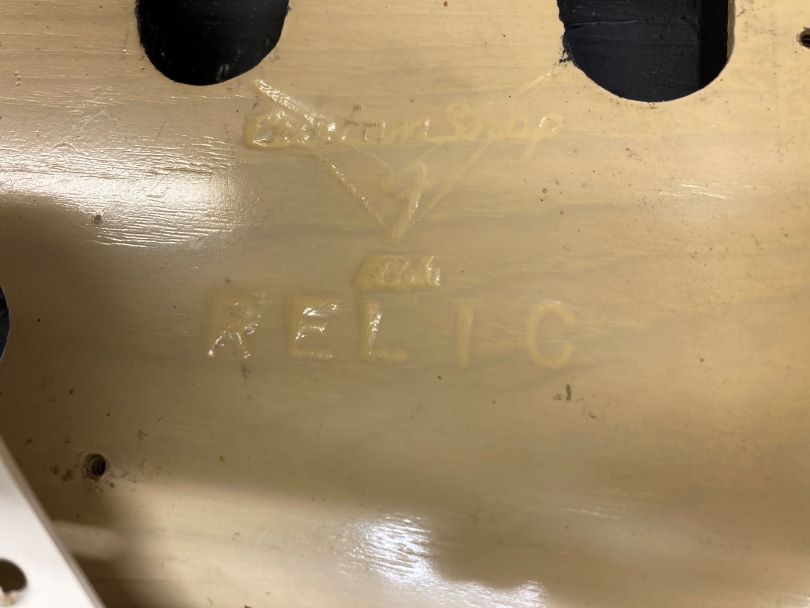 New guitars that look like they're decades old, yet are in perfect condition. What more can one desire? This idea is shared by many musicians, and I am one of them. I'm always happy to play any vintage Custom Shop. It gives us, poorer folks, at least partial satisfaction—a chance to play a high-quality, old-fashioned guitar that looks like it's really sixty years old.

The necks of heavy relic guitars are very pleasant to touch, as they have the lacquer rubbed to the wood and the hand glides smoothly over the neck, making playing more precise and comfortable. In the vast majority of cases, these are guitars made with great precision down to the last detail. Personally, I love their fretwork, which tends to be of high quality, allowing the guitar to be used in really pro-playing.