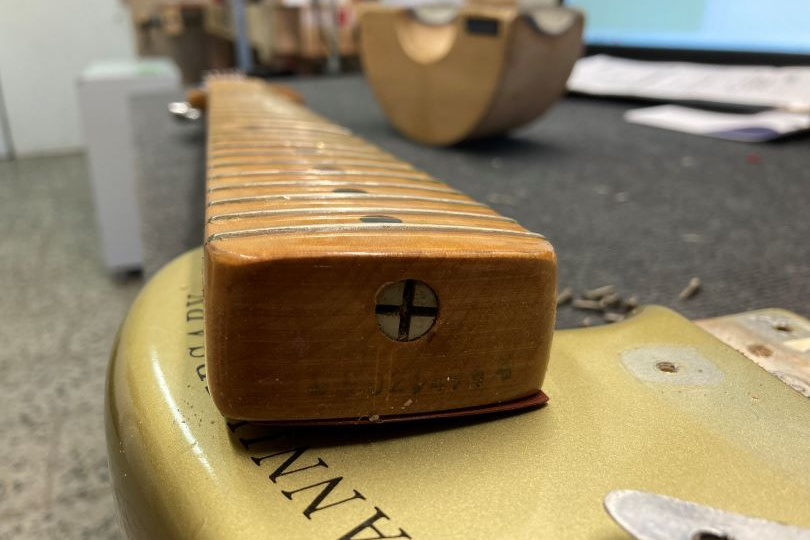 From today's perspective, the anniversary piece was nothing particularly unique. Basically, it was a 1979 model with a few modifications which, however, heralded changes for the better.
Zdeněk Lev - Thu, September 22, 2022 - 08:00

Under the Hood #26: 1979 and the First Anniversary Stratocaster Model

In 1979, Fender celebrated the 25th anniversary of its famous Stratocaster model. Today, with hindsight, we can better evaluate how successful this move and the model have been. Mr Fender himself has stated that the anniversary model represents both the past and the future. And he was right. In today's part of our series, we'll take a look at the individual features that made the Anniversary Stratocaster Model famous, as well as the details that have subsequently taken hold for the next several decades.

In 1954, the first Stratocaster came along and caused a true music revolution. It was a versatile, precise, quality and stylish guitar that has been loved by several generations of musicians.

The first models had an ash body, a one-piece maple neck, three pickups, a tremolo bridge with adjustable saddles and a sunburst nitro lacquer finish. This combination is probably the most used and most popular ever.

Twenty-five years later, in 1979, Fender came up with the first anniversary Stratocaster to celebrate this era. The promotional flyer highlighted new features such as the new lacquer colour, new tuning pegs, and the limited number of pieces, as well as the fact that when the model has been selling successfully for twenty-five years speaks volumes about it.

Basically, the idea was to awaken an interest in the Stratocaster as such. The 25th anniversary was in the late 1970s, when Fender in general was not doing well under CBS's management, as the quality of guitars was declining, and the brand was no longer attractive to some musicians. The idea of making an anniversary model was successful in this respect.

From today's point of view, the anniversary piece was nothing particularly unique. It was basically a 1979 model with a few modifications which, however, heralded a change for the better. Some of the modifications were unique, such as the lacquer colour, and some foreshadowed the future look of the Stratocaster (the return of the four-bolt body/neck joint, the adjustable end truss rod at the heel (bottom of the neck)).

Tony Bacon's The Stratocaster Guitar Book gives a few details about the anniversary model, including its price. It sold with a case for USD 800, which was virtually the same price as a regular 1979 Stratocaster. For the regular Strat, the price without the case was USD 640 (rosewood model) and USD 680 (classic maple fretboard). 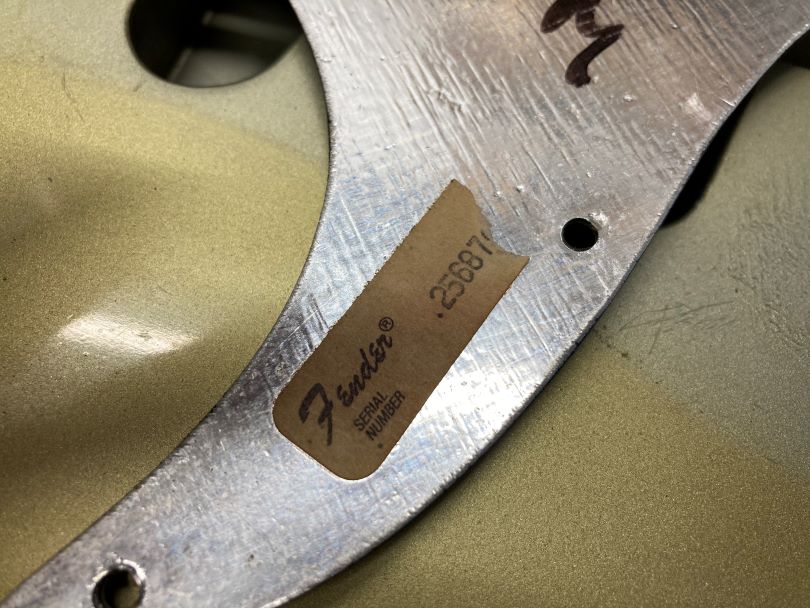 To make the anniversary model special, only a limited number of 10,000 were produced.

The numbering was relatively easy to recognize. On the back of the body, the 25th anniversary and the years 1957-1979 were marked on a plate, and at the very top was a six-digit serial number. The first models were numbered from zero (so for example the very first model had the number 000001). Most models then have the number 25 at the beginning to indicate the anniversary model and then four numbers to reach the number 10,000.

The Anniversary model was given a unique finish. While regular 1979 Stratocasters were sold in seven different colours (sunburst, white, black, natural, Antigua, burgundy, and Tobacco sunburst), white colour, called Pearl White, was used on the Anniversary Stratocaster. But there was a problem: specifically, the lacquer started cracking soon. It developed tiny cracks, which caused resentment among buyers, and most of these first five hundred or so pieces were returned to the factory for refinishing.

Due to problems with the Pearl White, the paint was changed. It was now silver and was called Anniversary Stratocaster Silver (Porsche Silver). This lacquer was applied to all remaining models.

Nowadays it is quite easy to tell the difference between the first and later models with the naked eye. The original Pearl White models have a paler shade of yellow. Stratocasters sprayed with silver paint have more or less retained their hue, but some have a slightly yellow-green tinge. This is quite glossy and gives a nice impression up close. 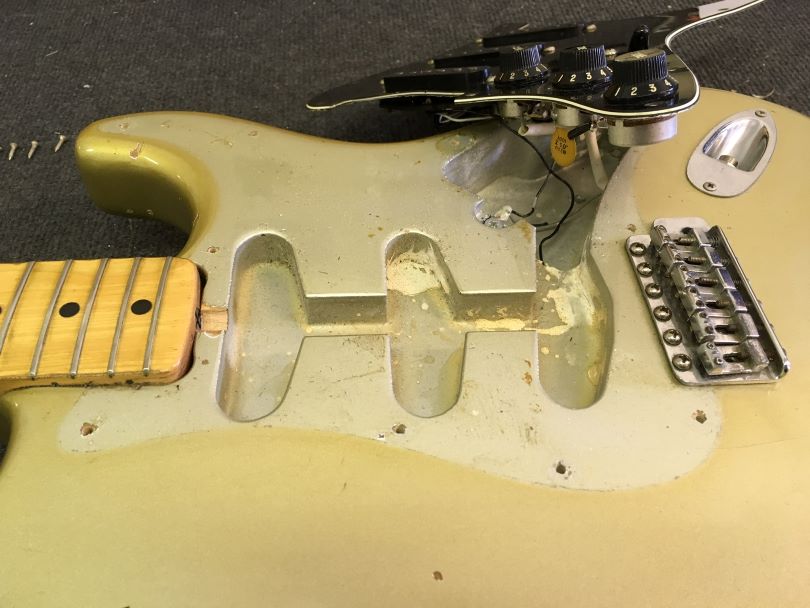 The body of the Anniversary Stratocaster is made of alder. This distinguishes it from the first models from the 1950s, which had an ash body. The Anniversary model, like the regular 1979 Stratocaster, is therefore quite heavy, suitable for studio playing.

The essential thing is the neck and body joint, which is solved here again in the good old way, with four screws. This guarantees a stable connection. The regular 1979 model, on the other hand, still has a three-screw connection. This anniversary model heralded the return of the technical solution of a more stable four-screw transition between body and neck.

The tuning pegs were Sperzel, which was also a new feature Fender was proud of with this model.

The pickups had a fairly strong output, their sound being quite fierce. 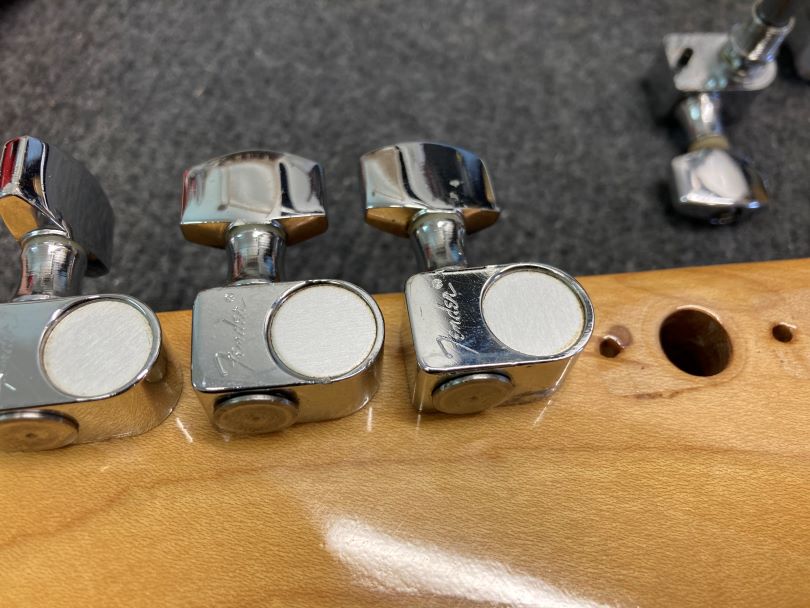 Accessories for the anniversary model

Anniversary Stratocaster had a new, black, solid and durable case, which Fender also presents in the promotional flyer. It states that it will keep the guitar in good condition for the next twenty-five years.

Also included with the guitar is a certificate of authenticity with a serial number that ensures each piece is unique. 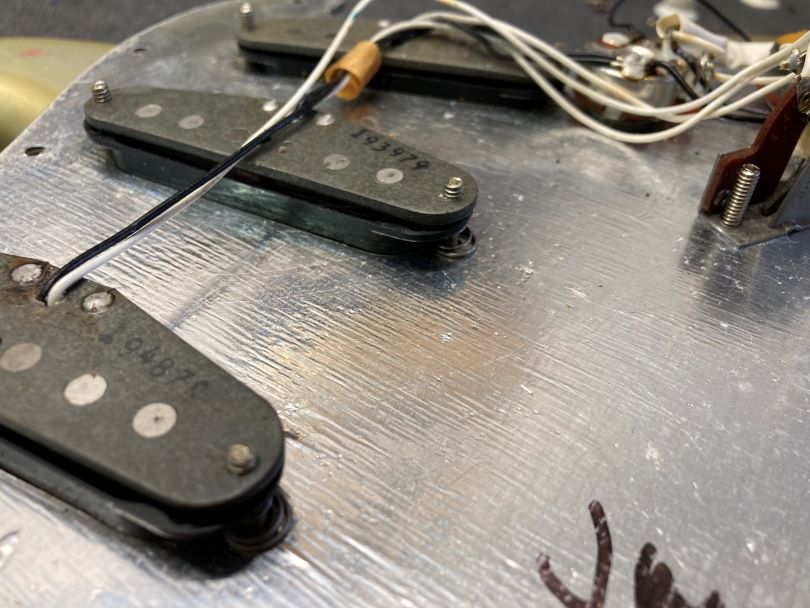 At first glance, the Anniversary model was distinguished from other models by the "Anniversary" sign in the top corner of the body. For some players, it is a popular accessory that enhances the guitar's uniqueness, but for other musicians, it's something they don't want on their guitar. I have come across a model that had the sign erased.

The second model was given to Rory Gallagher by Fender. Rory sanded the lacquer on the back and put different, larger frets on the fretboard to make the guitar more comfortable. 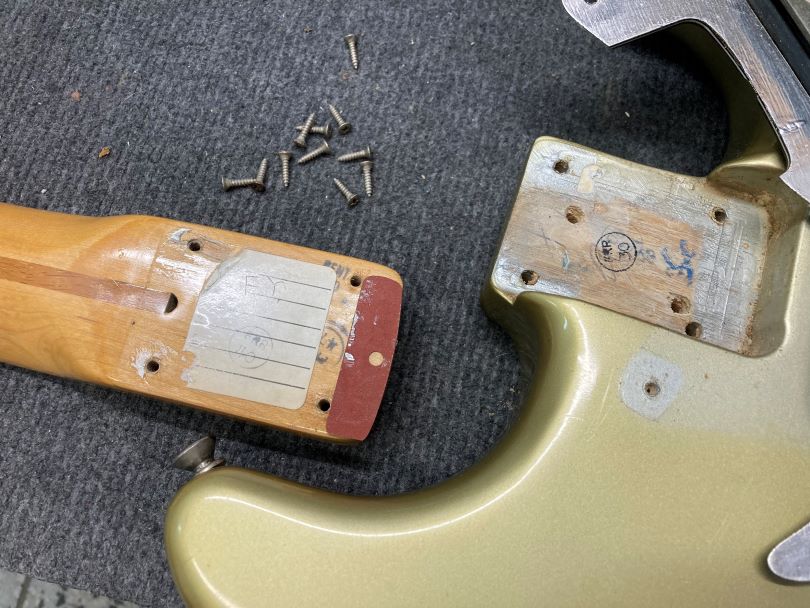 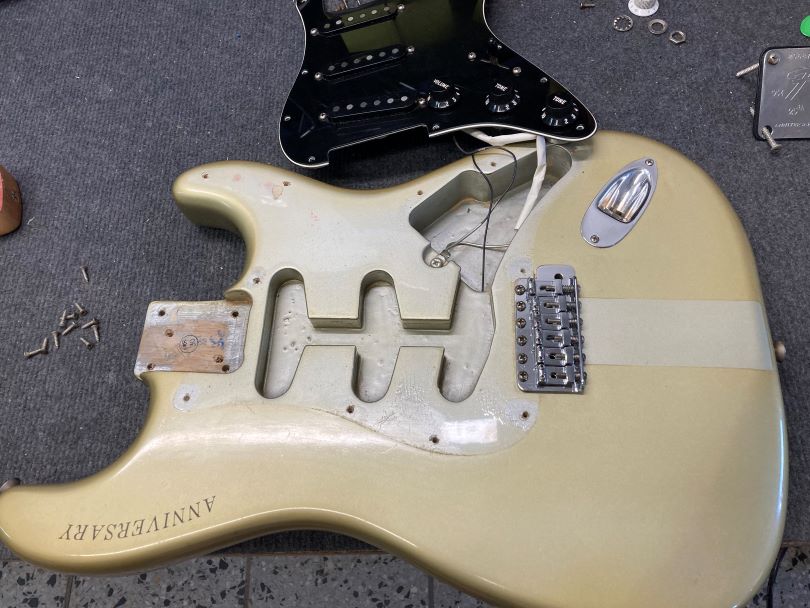 Overall impression of the anniversary model

I had the opportunity to play two 1979 vintage Stratocasters in our service department. Both were heavy and more suited for studio playing, but some enthusiasts will not mind the weight. The neck is quite fast and comfortable.

Sonically, it's a distinctive model; the pickups can be set to a fierce or mellow sound at will, always depending on individual preference. Both Stratocasters already had fairly low frets, which is a common thing in guitars that are several decades old. This is solved by re-fretting, which makes the fretboard like new and increases playability to 100%.

In my opinion, these are good guitars, the same in sound and playability as the regular 1979 models – except that they have a unique lacquer colour and better construction.

I am a guitar technician at Kytary.cz and have many years of experience with complete guitar maintenance and repair. I specialize in the maintenance and authentication of vintage, collectable, and second-hand guitars, and I enjoy passing on my experience. Thousands of instrume…
RELATED ARTICLES
most read news