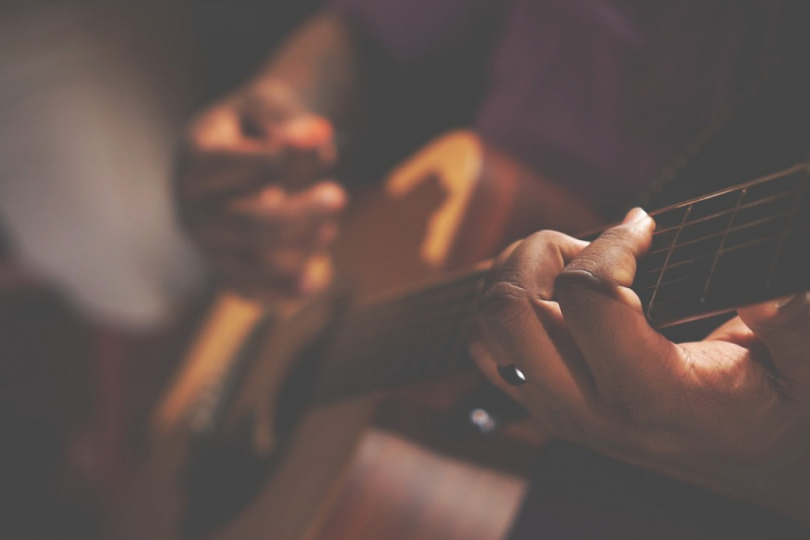 Why have so many guitarists today returned to the acoustic guitar? Quite possibly for one of the reasons listed below. Whether you own an acoustic guitar, are dusting off the one your grandfather left you, or are only looking for one, consider it very carefully. It's worth it.

1. The acoustic guitar will help you win every girl's heart, especially when it's in the claws of a bear.

2. You don't have to look around for sockets. You can play it anytime, anywhere. It's handy around the campfire, when busking or onstage when the control panel goes down.

3. You save power, so you save the environment. This will only enhance your image as a socially conscious individual.

4. You save money in general. You can do without a band, a car, or a home studio. You may have even inherited the guitar, so keep a really good eye on its condition.

5. Any idea can be composed and recorded immediately and anywhere without a combo and laborious microphone setup. You just need a mobile phone, which saves a lot of time, especially if you're posting fresh stuff straight to social media.

6. Being a bold and highly motivated musician has never been as easy as in the social media era. All you have to do is squat on the sidewalk with a Spanish guitar. Your potential audience is expecting a deep human story, so offer them either that or at least a cute mutt lying at your feet.

7. When you dig into the strings in the morning, half the neighbourhood doesn't have to get up with you. Ergo, no more searching for a rehearsal room or, worse, a new pad.

8. Dave Matthews, Ed Sheeran, Mumford and Sons attract crowds to stadiums. Who knows that one day you may be the top star!

9. You are acceptable for all ages. Teenage girls, mummies or grandmothers in old people's homes. Even parents will entrust their children to your music club.

10. Martin Guitars have been made since 1833, Cremona for over seventy years, so you are part of a long and venerable tradition. Whether you're heading to the embankment or the upper echelons, don't be afraid to point it out!

11. Over the last hundred years, the acoustic guitar has only changed in small details, perceived mainly by professionals. Only a few insider notes about ribbing and woods that you've previously read in a Taylor catalogue will automatically make you one.

12. Most guitarists start out playing the Spanish, but only the most expert players stick with it. The listeners know and appreciate that it's mostly you playing. The electric guitar sound, while incredibly colourful and dramatic, is only plugged into the amp and sent through the effects.

Born in 1988. When he was fifteen and deciding what to do next, writing was the obvious choice. At nineteen, he changed his mind. It seemed to him that it is history that writes stories. Then he found out that history is written by winners—he joined the losers. He majored in h…
RELATED ARTICLES

Which Acoustic Guitar Is Better: Classical or Western?

How to Choose Your First Guitar?
most read news