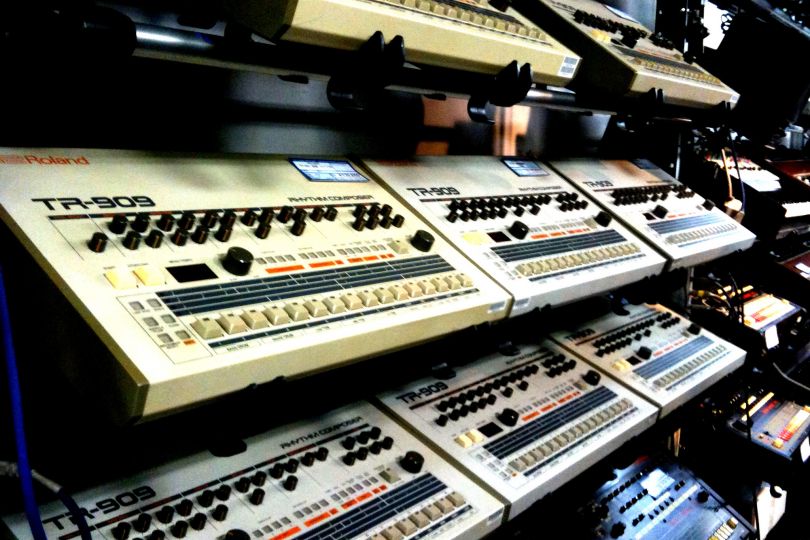 Sometimes noted as a machine totally unto itself, the "Roland TR-909" which was introduced in 1983 is an important piece of kit that greatly influenced dance music genres like house, techno, and acid. Designed by Tadao Kikumoto and released to the world after the TR-808 (more reading on that here), it is still a much-loved rhythm machine that can be found in studios across the world. Join me in this article to explore some of its more notable aspects in the sixth installment of: The Gear That Made Us.

A hug in a box

The two and a half minute wait for the 909 kick in Orbital’s “Halcyon On and On” which can be heard below is a wait that is worth it. Perhaps a statement that is somewhat significant based on the sublime level of emotion that can be felt in the track’s opening passage. While the TR-909 can happily deliver thumping richness in a track such as the one below, it can also be used to great effect as part of a live show—just as the below duo from Kent has demonstrated over the years.

Interestingly, one of the key house music pioneers Frankie Knuckles (he would use the 909 as part of his live DJ-sets at the Warehouse in Chicago) was a believer that the sound of the kick should be felt instead of being heard. He said: "When you feel it, it wraps itself around you, and it hugs you. I’ve watched it do some pretty amazing things to people on the dancefloor."

When the TR-909 was released three years after the more commercially successful TR-808, it cost the same amount ($1195), though two-thousand fewer units were available. By Roland’s standards, they saw the machine as even more of a failure than the 808. While the latter was used on tracks that were more recognized by the mainstream, the 909 was the first Roland drum machine to use samples for some sounds and provided  MIDI functionality, helping it to build a devoted userbase amongst the dance music world.

One of the reasons why the TR-909 has such a unique feel could be down to its "hybrid" sound simulation process that combines PCM (Pulse-Code Modulation) alongside digitally sampled hits. The hi-hat, crash, and ride cymbal sounds for example are a combination of the two subtractive synthesis types though the user has further options to shape their desired sound via individual tune, level, attack, and decay controls.

In the below video, Jeff "The Wizard" Mills from Detroit, Michigan talks about the purity of sound that can be achieved with the TR-909.

As touched upon in the above video, with enough skill the TR-909 can allow for a great variety of rhythmic patterns. In total, 96 patterns can be memorized (48 in two different banks). Alongside the eleven different sound sources, the producer or performer is provided with a lot of options and directions with where they want to take their music.

What is also great about the Roland TR-909 is the wide variety of routing possibilities that are available. Not only can each individual sound source be outputted separately using multi-output jacks, but the whole thing can be connected with other MIDI devices for synchronization (it can be controlled by the connected device if needed for sophisticated rhythms). If the user really wants to "go to town," an M-64C RAM cartridge will double the memory capacity available and is compatible with a variety of machines.

Produced by Shep Pettibone with a $5,000 budget, Madonna’s “Vogue” is a good example of a more commercially successful house dance track that features the TR-909 when it became the world’s best-selling single of 1990. Noted as a track with production ahead of its time, the snappy, swinging grooves from the Roland build in the background as Madonna eloquently does her thing.

With the arrival of the 90s, it is evident that house and techno became a more prominent staple of music scenes across the globe and the machine that was once considered a failure by Roland became the unlikely sound of the decade. Other tracks that have used it include the influential “Show Me Love” (Robin S), “Hunter” (Bjork) and the more recent “Videotape” (Radiohead).

It is important to remember that it isn’t just the kick drum of the TR-909 that is so sought after by producers, rather all of the sounds that can be created by the machine and everything in unison. Notably, the open hi-hats and distinctly recognizable clap are a regular feature on thousands of house records.

It would be hard to write an article about the Roland TR-909 without mentioning Larry Heard (Mr. Fingers)'s “Can You Feel It” from 1986. Released by Trax (originally as an instrumental on Heard’s Washing Machine EP), the track is said to have laid the foundation for the deep house genre and was recorded in Chicago.

The simplicity of the track (only a Roland TR-909 and Juno-60 were used to produce the record), speaks volumes about how much the 909 can really offer to a producer. When Heard went solo in 1984, after bringing in some extra income as a drummer alongside his day job, he was able to create a timeless piece of music with just two cassette decks and two takes. It is somewhat safe to say that the Roland TR-909 will always have a timeless quality to it due to its unique sound, its history, and what it stands for in the music world.

Originally from Lincoln (UK), now based in Prague (CZ), my interests in music are quite broad-ranging. As a teenager, I grew up listening to the Foo Fighters and chose to pick up the guitar after watching my step-dad rock out to tracks from the likes of Thin Lizzy and Status-Q…
RELATED ARTICLES

The Gear That Made Us #7: The Moog Minimoog
most read news