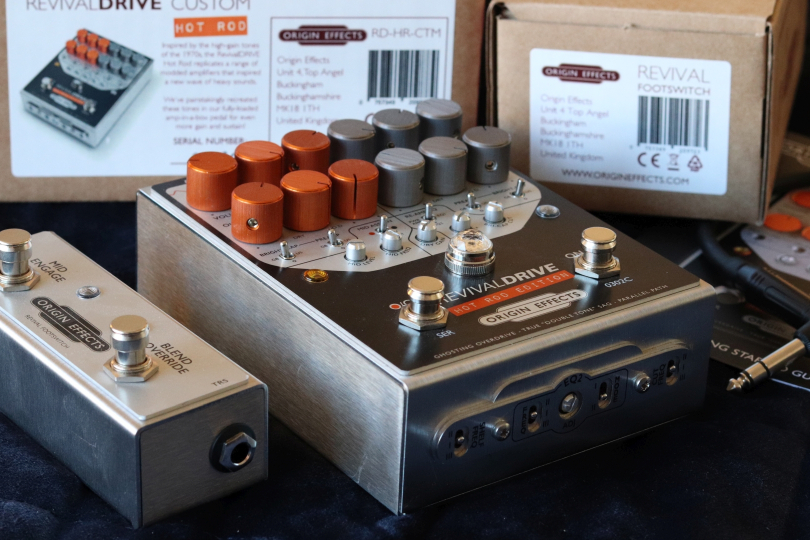 I've been preparing for today's gem for a long time. Rumors and enthusiastic reactions supported by many awards preceded it. Did Origin Effects' uncompromisingly analytical and innovative approach to the task of fitting a good old tube amp into a guitar effect really result in a redefinition of the coveted "amp in a box" category? Let's take a closer look at this "revival."

I came across the English company Origin Effects some time ago in connection with their ultimate compressors Cali76, which are miniaturized versions of the studio cult Urei 1176. Designer Simon Keats has applied the experience gained in the much wider market segment of distortion effects. However, it's not the usual combination of different gain stages with customised equalisation or perhaps digital simulation. The basic idea behind all RevivalDRIVE types is a scaled-down, completely analogue replica of the circuitry of vintage tube amps so that their characteristic behaviour, including interaction with the guitarist, is preserved above all. Anyone who is capable of putting their preconceptions aside already suspects that this is exactly that mythical mojo you're always looking for—the way the gear responds directly to you, how it feels when you play through it. The sound itself is just another part of that overall feeling. 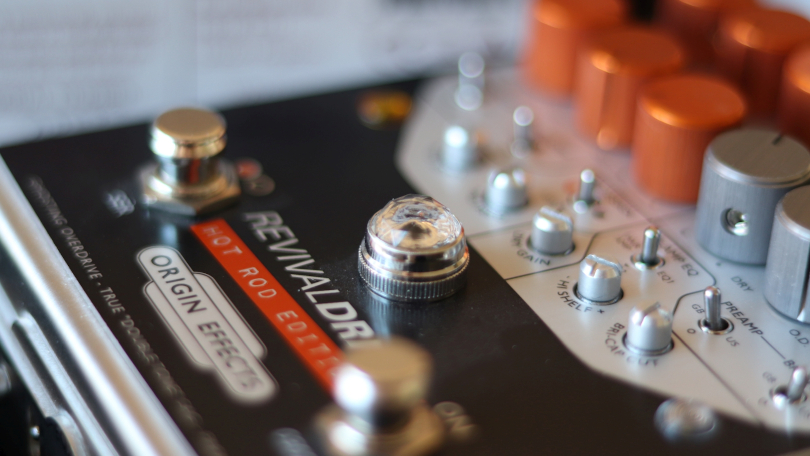 The unorthodox approach of the Brits is documented by box printing full of statements like "classic amp topology," "complete amp sound" or "true tone sag." Even in the pursuit of the most accurate representation of the amplifier's behaviour, they went to almost absurd details, which they highlight a a unique selling point. I'm talking about the Ghost potentiometer, which controls the so-called ghost note, a separate low-frequency tone generated by old amps, most audible when soloing the neck pickup.

Since it also depends on the frequency of the electricity used, you have the option of using the DIP switch to select British or American mains—and thus get a little closer to the sounds used in legendary old solos. You really won't find this level of detail anywhere else, and it's great that you can control it as you wish, as ghost notes are considered by other designers to be a problem with old amplifiers. So again, you decide if you want to get closer to the classic feel, including its possible accompanying imperfections. Although personal feelings are hardly transferable, especially in these mojo situation, the detailed video discussion by the well-known youtuber Rabea Massaad definitely conveys a lot of information. . . .

I was lucky enough to get my hands on a truly exceptional "fully loaded" piece from the limited edition of 250 pieces: The Origin Effect RevivalDRIVE Custom Hot Rod Edition including the foot switch. The Hot Rod in the name means that it has more gain, more sustain and more aggression compared to the basic version referring to classic Fenders or Voxes and is inspired by amps from the '70s to '80s (simply said Marshall JCM 800 or Hot Plexi). Custom refers to the added front EQ panel for an even more perfect match to your particular amp.

Waiting for me in the box was a nearly 1.5 kg massive chunk of "metal" that exudes reliability and durability at every touch. The flood of controls can intimidate the poor guitarist at first glance, hence the partially reassuring two-page starter guide included. In the end, the controls aren't as complicated as they look, but without a more detailed manual you'd probably be a little lost at first. 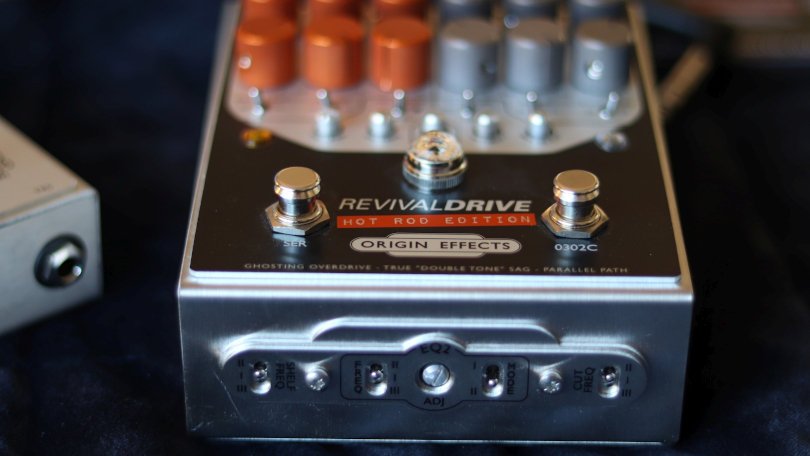 Fortunately, the driver ranges are set appropriately so that they play decently in every position, so you can't actually screw up the complete nonsense. For example, I didn't realise at first that the Volume control is actually a Gain control, similar to the old amps where distortion was added by turning up the volume. Lows are logically bass. But that was in front of the drive section, so nowadays the term "Tight" is more commonly used for such "Pre-bass". More/Press is another peculiarity not seen elsewhere, from mid-right it's classic Presence, from mid-left we control the negative feedback, i.e. the speed and dynamics of the distortion, which is most audible at lower gain at the moment of break-up (when the sound starts to distort). We've already discussed Ghost, Blend is the classic blending of the dry signal for better readability, and Output is thankfully just the classic output volume.

There are a couple of other mini switches that change the timbre flavors slightly to British or American. The demarcation lines indicate which part of the circuit the control belongs to, and the rest is mostly dedicated to fine-tuning the overall sound to the specific power amp. These are unconventionally designed to be operated with a screwdriver (although you can move them with your fingers), as it is assumed that you won't be turning them that often. You set it once and leave it at that. I'd recommend setting up some basic sound via the Re-Amp EQ first (three basic options) and tweaking with all those controls to suit your amp, there are plenty of options really. Only then do you go into the detail of setting your own sound with the orange or silver knobs.

Two colors distinguish a modern solid-state or vintage tube rectifier, so you have two independent channels. With a DIP switch you can still change the valve to silicon and have two modern channels. The foot switch extension functions seemed unnecessary to me as I saw them in the picture, but when plugging them in I realised they were cleverly devised too. And since the channels and on/off are already controlled by the footswitches on the effect, it's good to have kick mids (fully configurable in rate and frequency, of course) and a switchable blend (no need to turn the Blend potentiometer then) for solos, which broadens the possibilities for live use.

Also included is a very high quality interconnect cable. I'm still speaking generally about the entire RevivalDRIVE family (the tested custom hot rod is no longer being manufactured), because the basic sound is the same for all versions and differs in the number of channels, the range of fine-tuning options, size (smaller RD Compact version with one channel) and the level of distortion (Hot Rod version). The video above shows how the gain levels differ between the two types, and you can choose which specifically suits you better.

The RevivalDRIVE signals the power on by means of a so-called jewel lamp, reacting with the intensity of the light to the mentioned sag of the power section, so with this detail (which, by the way, is also reflected in the company's logo) it fits perfectly into the series of pedalboard gems. So I have to approve of Origin Effects' advertising claims that it manifests itself and behaves like a real amp. No fancy multi-effect can give you such a whiff of reality! The sound is quite raw to the point of being aggressive and took me a while to get used to at first, but that is precisely why it will work well in a band.

From a design point of view, then, I really have no idea how much further guitar effects could go. It is uncompromising quality in every aspect—the test and final inspection are in line with the price level. So those who settle for only the best are on the right track. I recommend at the very least to give it a try, as there's a pretty good chance that on your journey in search of great sound in a miniaturized package suitable for today's hectic times, it will help you reach your desired destination. 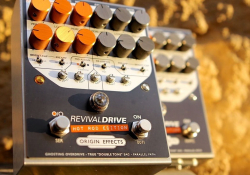 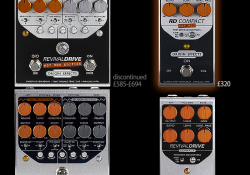 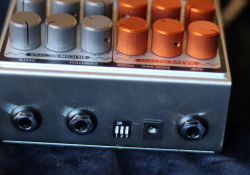