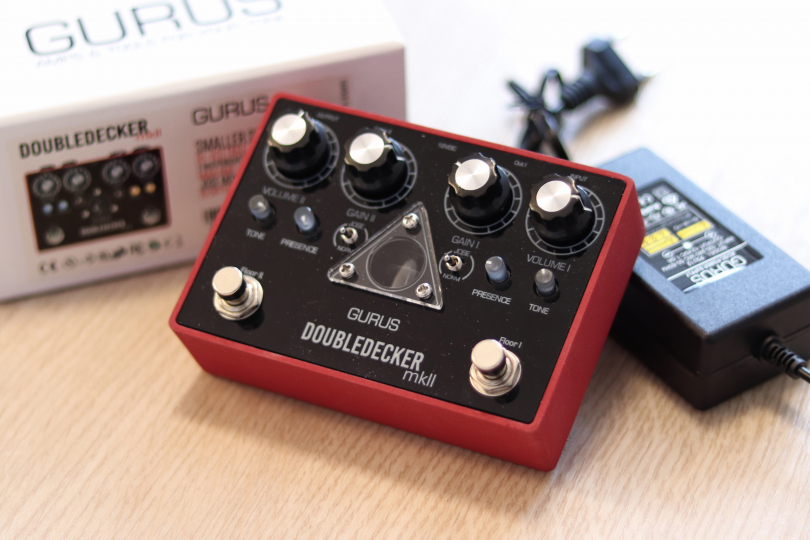 In the first part of this series, I promised that I would definitely take a look at the upgraded doubledecker if I had the chance. And since promises should be kept, in the final part of our "Gems", we'll go back to the beginning and see how designer Chicco Bellini has worked on his MIAB pedal in the meantime.

We'll remind ourselves that MIAB stands for marshall-in-a-box and it's a very prestigious category with many great competitors among gear makers, as we've seen more than once in the Pedalboard Gems series. Italy is otherwise a clear superpower in the whole musician audio segment with many representatives of big and well-known companies such as Markbass, dB Technologies, RCF and my favourite acoustic combos Acus, but also smaller boutique companies for the fancier ones like Brunetti, Masotti, Mezzabarba or Cicognani. And it's two of these (Baroni and Gurus) that have merged under the wing of Fox Gear Distribution to optimize their business activities and are gradually being brought to public notice.

Apparently due to the covid situation Gurus DoubleDecker mkII was not in stock for a long time. Then it appeared in some French e-shops, but due to negative customer references (and lack of real photos), I rather skipped the first one and ordered it from another e-shop after some time. Soon a suspiciously large package arrived, and to my chagrin, I unpacked the mkI version :( Thanks to the rules on Reverb.com, I hoped I didn't lose my money though. Fortunately, the e-shop owner communicated, apologized, sent a form to send it back for free, and waiting for some more time, the correct mkII version finally arrived.

The upgraded Gurus DoubleDecker offers (like the characteristic London double-decker bus) two Floors, figuratively two Marshalls in one box and of course much more. Floor I is more open with a bit less gain, Floor II is more compressed and more gainy. The major change from the previous version is the dramatically smaller size, much more suitable for today's overflowing pedalboards. In direct comparison with the original model, this difference is even more impressive. A 12V/1A power supply has also been added to feed the high voltage (150-300V) ECC81 tube, which shines encouragingly through the stylish triangular plexiglass. However, this is not an exaggerated showing off but an understanding of the basics of marketing. When there is something special, it is advisable to make it sufficiently visible, as this promotes feelings of a successful and satisfying purchase in the customer.

Overall, the pedal has been further simplified, although it also offers quite sophisticated options for various connections, which you can study in the (electronic-only) handbook. You can kick the channels between each other as well as swap their order. The full equalizer (bass/mids/highs) is replaced by backlit mini Tone and Presence pots. A clipping mode has also been added with the familiar Jose designation after the legendary hot-rodded Marshalls. In the first channel of Jose mode, germanium diodes are used for distortion, while LEDs are used for the second. The Jose adds not only gain and compression, but also a bit of noise and a noticeable volume jump, which must be taken into account. However, I don't think these modes will be switched on stage, so it's not that much of a complication.

Apparently, again due to poorer product availability, you'll hardly come across any decent demos yet, so I filmed a light flight through a few basic settings for myself.

The pack does not include the formerly almost intimidating polystyrene strips, but considering the price, it could have been certainly worked away on better—and here we go again with marketing. But designer Chicco Bellini has done a great job and the new version personally suited me better sonically. The first channel is considerably more usable (although I could imagine a smaller and more detailed gain range), the lack of full equalization wasn't so crucial after all, and I fine-tuned the bass on the preamp.

I'd recommend a preamp or clean amp channel as the best application for DoubleDecker, which can handle playing directly into an IR loader, but the fine-tuning options are limited. I tried comparing three setups (IR loader, tube marshall preamp, tube end amp) and each time the settings had to be significantly adjusted for the application.

So if you're after a quality marshall sound in a miniature package, you've come to the right Italian place. The Gurus is really incomparable to standard distortion gear—but of course also in terms of price. However, the tube dynamics, clarity, natural response to different pickups and assertion in the band sound will definitely make up for it.

With the 20th anniversary episode, we conclude this inspirational series which, thanks to many excellent products, ended up being almost twice as long as I had originally planned. Purely from the point of view of musical gear, we are currently living in paradise! And it's up to you how you take advantage of these positive opportunities and great prospects. 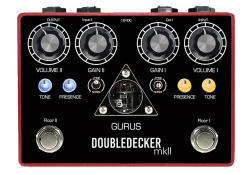 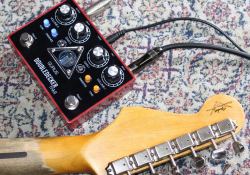 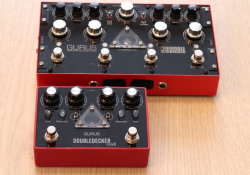