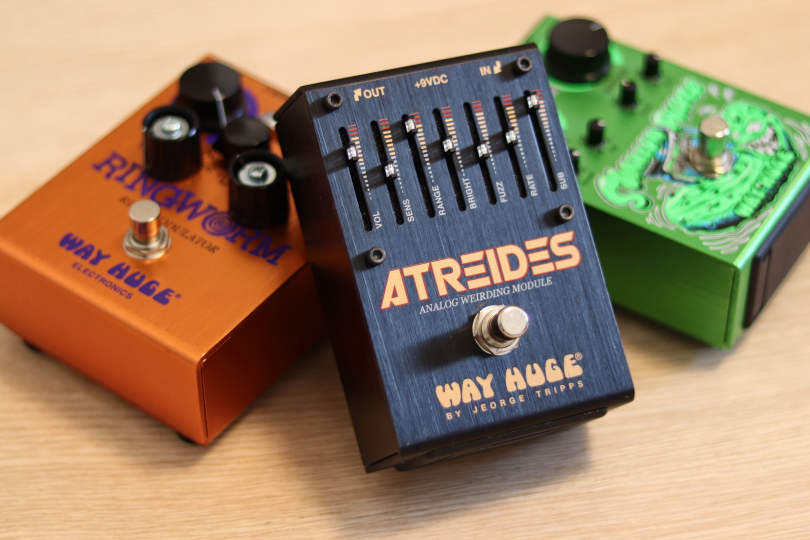 In this penultimate episode of Gems, we boldly enter a world where the unexpected, the unknown and the unbelievable meet. We embark on a spectacular journey through the wonders of the universe and the mysteries of time. From the limits of the incredible to the limits of the improbable. This is what the insane noise generator Way Huge Atreides promises.

The legendary book series Dune is not only the inspiration for the recent Hollywood meditative blockbuster (and its cinematic predecessors) or one of the first real-time strategy games (followed by many others, of course). It also inspired Jeorge Tripp, the lead developer of the Jim Dunlop Corporation which includes his brand Way Huge focused on unusual guitar effects for tinkerers and experimenters. In the film version of Dune by cult director David Lynch, the main character Paul Atreides uses an unconventional sonic weapon called a weirding module. Tripps tried to relate it to a mini synthesiser EHX which is another '80s oddity made of plastic and cardboard, as he describes it in a very psychedelic presentation.

No wonder this eclectic pastiche turned into total madness with the apt subtitle Analogue Weirding Module. A bizarre kaleidoscope of organically synthetic sounds, explosively growly octaves, equally expressive vocal filters, dynamically swooshing phase and pleasantly gnarly fuzz. The copywriter could go crazy when writing descriptions because Atreides pushes the boundaries. Even the phrase "the sky's the limit" doesn't apply, the limit is not the sky but the infinite universe itself.

The Atreides looks rather unusual for a guitar box: it resembles an equaliser because of the sliding potentiometers which, however, control several interacting effects. In addition to the obligatory Volume, a second slider sets the sensitivity of the response to the force of the strike so that the sound changes depending on the dynamics of your playing. Range then sets the range of the filter, Bright sets the overall brightness, Fuzz needs no explanation (it's only worth noting that even in the minimum position it's still audible in the sound), Rate affects the speed of the phaser and Sub adds lower octaves. There are two more trimmers inside to adjust the depth of the phaser and select the added octaves (one or two) depending on the instrument used. In fact, Atreides works not only with a guitar but also with bass, keys or drum machine—just a universally cosmic weirding module.

It's endless fun because each setting produces different sounds, it responds to your playing style and also each pickup and guitar behaves a little differently. The sound is vibrant, colourful, dynamic, analogue and responsive. Given the variety of sound options and the lack of storable presets, this instrument is designed rather for studio sound engineers than wild stage shows.

Apart from unconventional enrichment of recordings, Atreides is great at slow drone/doom riffing and its tracking is perfect for an analogue, so it won't get lost in any solo fast synth runs. I bought it for my upcoming experimental EP Baritune of Dune and in the following video I tried out how it responds to different guitars and pickups in various settings. It was a very enjoyable and inspiring evening...

I struggled a bit with the integrated battery case—even after long research, I did not find a way to open it easily. And I couldn't get the battery out without breaking a fingernail either. Fortunately, this design has eliminated the extremely bright signal blue LED light, which might help in a sun-drenched scene at midday, but otherwise is quite annoyingly blinding (some people solve it by taping over it with gaffa). However, these are just minor details. On the other hand, I appreciate the system of screws on the bottom of the box, which can be loosened without a screwdriver.

Those who like to seek challenges and be surprised by untrodden paths need not be afraid to give Atreides a bit of a hard time. Because, to paraphrase Dune again, "Fear is a tone killer!" Way Huge also offers other sophisticated sound-twisters like the similarly insane Ringworm ring modulator or the muff on steroids Swollen Pickle. Thanks to modern technology, for a small fee you can also download the EHX synth as an app to your mobile or tablet and experience a real 80s weird sci-fi feel.

In the last episode of Gems, we'll go back to the very beginning, bringing this series full of music inspiration to a stylish close. 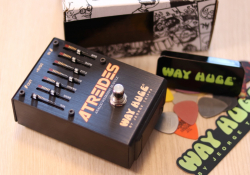 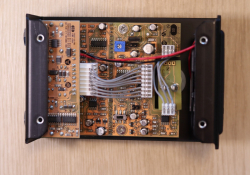 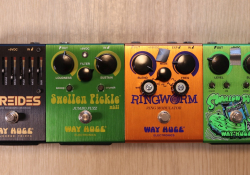