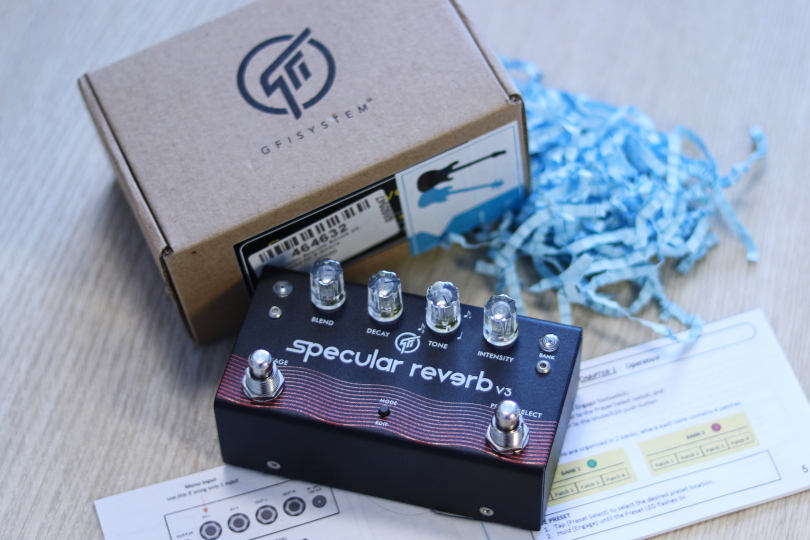 Another effect that once stirred up the world of pedalboards is the shimmer reverb. The dreamy, almost string-like textures instantly gained massive popularity, inspiring a multitude of artists and producers to come up with their own inventive creations. As an example of this flourishing and prestigious segment, I have chosen the exotic Indonesian reverb GFI Specular.

The title "Shimmer" describes pretty well the shiny, glittery sound that world-famous ambient pioneers Brian Eno and Daniel Lanois introduced in the 1980s. They added an octave higher sound and a very long reverb to the repeating loop, which is the basis of shimmer reverb. Then you can add modulated delay and slow attack to get a dazzling ambient reverb, ideally with a volume pedal. It fills the space very well and is therefore often used in film music. Of course, fans of slow, relaxing music and all sorts of ambient and atmospheric styles immediately jumped at this sound.

Due to its extreme computational demands, it was mainly the domain of high-end and expensive studio digital rack processors, but thanks to rapid technical development, this style of reverb gradually began to make its way into (relatively) smaller floor effects. Personally, I first encountered it in the form of the famous preset Particle Verb in Line 6's gear. Since I also play some atmospheric baritone instrumentals, it fits perfectly into my arsenal. So I started looking for a suitable combination of quality, size, controls, multiple preset options and, of course, price.

The cheaper Zoom boxes bothered me with some minor details or sound artefacts, though they were usable for live performance and I played a few gigs with them. Unfortunately, the otherwise excellent Line 6 M5 (without the original transformer) regularly reset my prepared pedalboard with its high power consumption. Top levels like the Strymon Big Sky, Source Audio Ventris, Boss RV500 or Eventide H9 Max were either too big, unnecessarily complex or too expensive for my special hybrid-acoustic purposes. Like many times before, I was helped by the protagonists of so-called worship music, as our requirements once again unexpectedly coincided. With lots of impressive examples of "musical worship of God" full of angelic choirs, they pointed me to the GFI system, an obscure company from Indonesia, and their Specular Reverb V3.

As the name implies, this is the third, improved version of the reverb pedal. I was mainly attracted by the comments about the basic Spatial algorithm. They promised an exceptional spatial impression, based on psychoacoustic principles rather than the usual room geometry (room, hall, etc.), while maintaining excellent intelligibility of the main signal. The ambient reverb settings can easily be overdone, creating an incomprehensible mishmash instead of a luxurious atmosphere.

After all, cheaper pieces do not connect with the original signal quite as musically, they have various annoying artefacts and are much more prone to inappropriate blurring of the resulting sound. Personally, I was not convinced even by the often recommended TC Hall Of Fame 2, where I missed the feeling that the reverb is "in your face," which is of course just my subjective impression. I sent it to a second-hand store and slightly shakily ordered the noticeably more expensive exotic piece.

After unpacking the box, I was greeted with eco-friendly shredded paper as filler and the confident slogan: "We create space for your imagination." The Specular, which I then renamed the "Spectacle," was a really pleasant surprise—even at maximum settings, it still produced a musically usable expression (within the genres, of course). In addition to the preset Spatial, I became fond of Infinity and, of course, Shimmer which is sometimes called the most enjoyable shimmer reverb on the market. Further variations of Modulated, Echo, Tremble and Voices can be fine-tuned using four unconventionally colour-backlit knobs to achieve the desired spectacular atmosphere.

Up to eight presets can be stored in memory, and although the controls are lacking a display due to the small size of the pedal, they are easy to get used to. There's a stereo In/Out and an input for an external tap/exp pedal. The Specular can partially do the freeze function, but the ramp-up is pretty slow, so it takes a bit of practice or a very slow song :)

The Specular Reverb V3 has the dimensions of a standard guitar box and, for a digital effect, pleasantly low power consumption of 100mA, which is suitable for any multi-source used in pedalboards. It not only works perfectly with guitars but is often used for keyboards or as an effects unit in general. I was most interested in how it worked with acoustic guitar, where it also excelled. In the following video, you can clearly hear it on its bigger brother Specular Tempus (the algorithms used are the same).

The Tempus also includes a whole delay section from another Specular Clockwork pedal and a couple of new algorithms like an interesting anti-shimmer that adds octaves down instead of up. Unfortunately, I've once again demonstrated my "extraordinary talent" for picking models, as the Specular Reverb has since been discontinued and replaced by the new GFI Skylar Reverb. However, that doesn't change the fact that it's a great piece of (not only) guitar gear that definitely deserves a place in the Pedalboard Gems.

Henry Widjaja, the founder of GFI, explains that they have to respond to the creative pressure of their competitors, which has been significant in this segment lately—there are always new and cool effects coming out. But he's glad he went down this DSP (digital signal processor) route, even though he started—like almost everyone—with a variation on the analogue Tube screamer. However, it wasn't until the first digital Specular reverb that he gained success and helped put his company from exotic Djakarta on the world map of top guitar manufacturers.

So, make sure to explore the enticing world of atmospheric reverberations. There are plenty of options today in all price and quality categories. 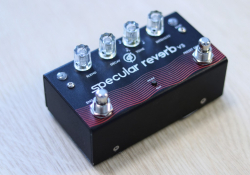 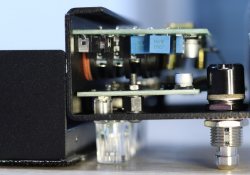 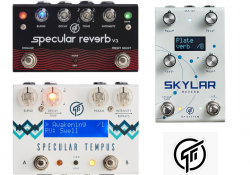