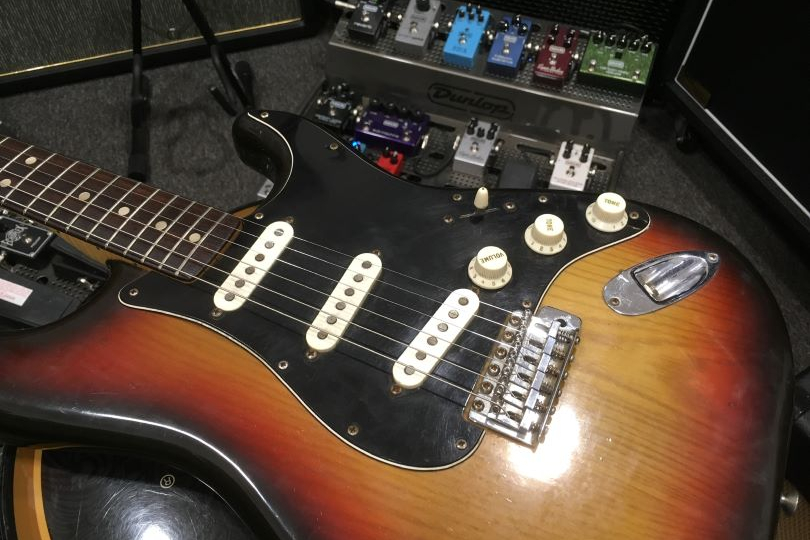 Considering how many guitars Fender makes today and that they are mass-produced, the quality is still very high in all respects.
Zdeněk Lev - Thu, November 24, 2022 - 08:00

The Stratocaster is often described as a revolutionary, ingenious or timeless instrument. You might think there's not much to change about it. And also that, at first glance, it has hardly changed since 1954. However, it has undergone several modifications and changes which are not so visible to the eye, but which differentiate the younger models from the early examples quite considerably. Let's take a look at how the Stratocaster was made in the beginning, and what it looks like when it rolls off the production line today.

In the 1950s, electric guitars at Fender were made a little differently than they are today. Musicians had different requirements, they didn't know and didn't have the options that we have today. A Stratocaster from the 1950s and one from today may look almost the same, but they are definitely not the same. In order to get a good grasp of what has changed since the first years, I'll describe the differences in each part of the guitar.

The headstock is a fairly iconic part of the Fender guitar, defining the two basic models of the Telecaster and Stratocaster in particular. In the 1950s, the Stratocaster headstock was smaller and had only one type of tuning machines. These were Kluson brand, the strings were plugged into them and then rotated around the top of the tuning machines. These tuners are generally acknowledged to be the most stylish. They were also of quite good quality. Most of them are still working on the original models today without any problems.

Nowadays, we can find more types of machines on the Stratocaster. Firstly, there are the classic ones from the 1950s, but on more modern models we can also find machines of a different design. Most of the time, the string is threaded through the tuner and then wrapped around.

Some models have locking tuners, which can be considered a certain trend of the time. They are stable in terms of holding the tuning. Changing strings is easier and faster. The quality of today's tuners is very high, they have a low failure rate. 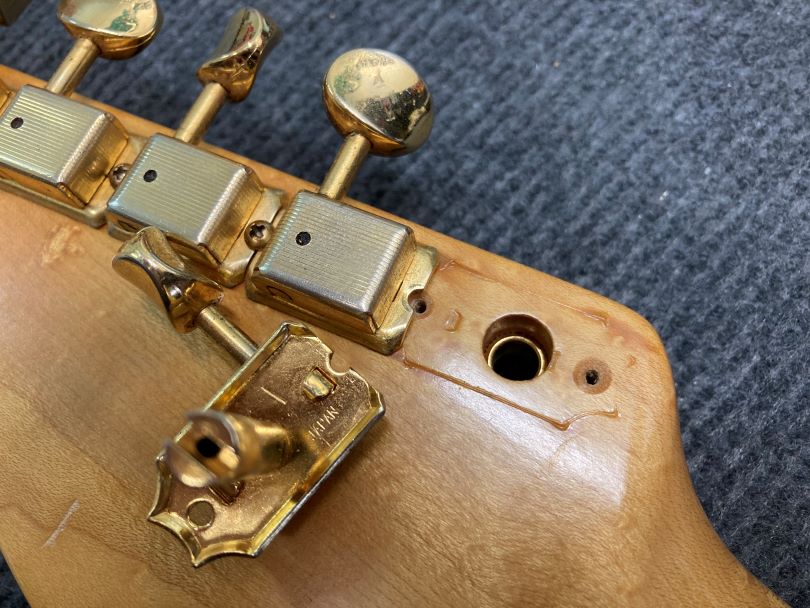 Originally, the frets were made of bone, which many (including me) believe is an unbeatable material for this component. Bone is naturally oily, which ensures the strings slide smoothly in the grooves of the fretboard. It also has great properties in terms of sound transfer. It is hard and it is easy to work with. And it lasts a long time.

Most of today's models have a synthetic bone fretboard. This material is quite fragile when processed and breaks easily. Nevertheless, it is popular and widely used.

On some models, we can see a roller nut, which is a zero fret made of metal. Instead of grooves for the strings, it has tiny rollers that ensure the strings slip smoothly and increase tuning stability.

The neck profile was very robust in the early years of Stratocaster production. It was nicknamed the baseball bat because it resembled the shape of a baseball bat. Over time, neck profiles have been modified to meet customer demands. Nowadays, most models have a completely different neck profile than the original models. Today, necks are narrower, with the C profile being popular because it suits most musicians.

In the 1950s, the main and only material for the fingerboard was maple. Rosewood was gradually added in the late 1950s. However, at that time Brazilian rosewood was used, which had beautiful grain and colour. Today, this material is banned. Then there was Indian rosewood and nowadays pau ferro.

Pau ferro is one of the few options available now that rosewood harvesting is being curtailed. It's not a very pretty wood to look at, even after treatment it doesn't show its grain. And it's quite rough to the touch.

As for maple, it's a classic choice even for today's models, there's not much to criticise. 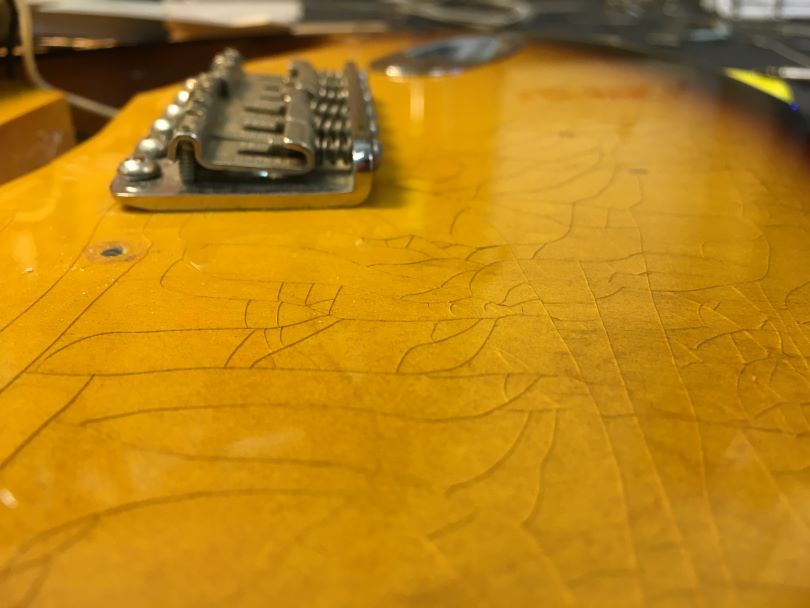 Originally, the fretboard was fitted with smaller frets, usually about 1 mm high and 2 mm wide. Today, several fret sizes are used and each model has different ones, so the guitarist can choose what suits them.

The radius of the fingerboard was originally 7.25 inches and it stayed that way for a long time. Eventually, the radius began to change, and most models today are fitted with a 9.5-inch radius. It's more comfortable for solo playing. Some models have a combined radius, so for example 9.5 inches at the beginning of the fingerboard and 12 inches towards the end of the fingerboard. Ideal neck dimensions are still being sought to meet the demand universally.

For a technician who handles guitar setups, it is important where the adjustable end brace is located on Fenders and especially Stratocasters.  In the case of the original models, the end brace was at the end of the neck, that is, at the joint of the neck and body. If the neck had to be adjusted, it was necessary to unscrew it from the body, move the brace, screw it back on, tune it, and test it. If it wasn't right, the whole process had to be repeated until everything was adjusted correctly.

A large number of today's models have an adjustable end brace on the headstock. So they are relatively accommodating when setting the neck, which is easier and faster. Just take the appropriate Allen key and start setting.

The first Stratocaster models were made from ash wood. After that, Fender switched to alder wood for most of its models. Ash was only used on models that had a transparent lacquer finish. The guitars that had custom colours were alder.

Nowadays, Fender has completely abandoned the use of ash for reasons of sustainability and availability. Ash is declining and Fender still produces a large number of guitars. That's why they save the ash for special models and editions. 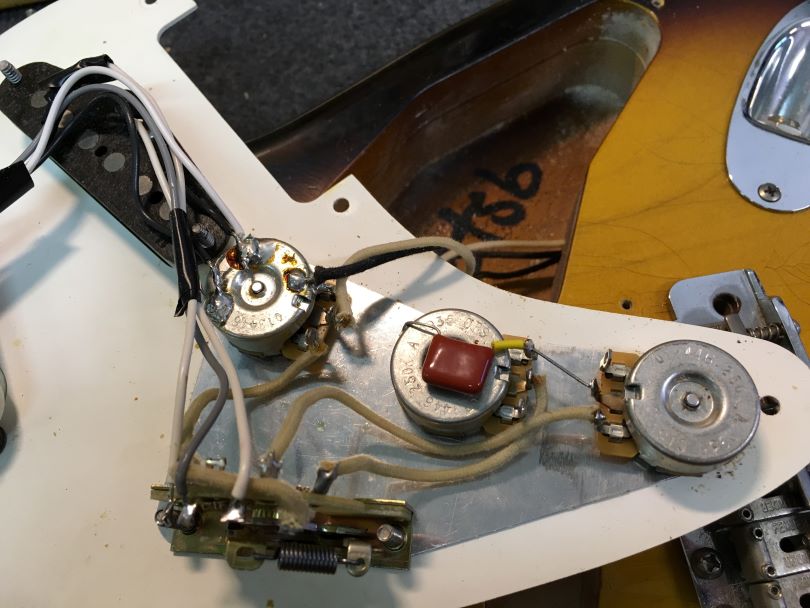 In the 1950s, Fender used Nitro Lac. It had ideal properties, the wood could breathe and age with it. It had a thin layer, so guitars weren't as drowned in lacquer as they are today. The paint finishes had different shades and faded a bit over time due to UV exposure. Thanks to that, you could have a completely unique shade after a few years.

The Nitro Lac also cracked quickly, which customers didn't like very much. Today, it's a welcome effect. Over time, it was phased out and replaced by polyurethane. Today, a thicker layer of lacquer is applied so the wood is more drowned in the paint. But in mass production, there's no other way to do it. Stratocasters from the 70s are an extreme case where the lacquer layer is sometimes incredibly thick.

The body design has not changed much. Some details have been changed, mostly its edges were shaped in a way that the body of the instrument fits the guitarist better when playing. The thickness of the body also varies. Depending on the material, some models may be heavier than others.

In the fifties, pickups were wound by hand, and that's what makes them unique. This makes each pickup slightly different and allows it to have specific sound characteristics.

Today, pickups are machine-made, so the number of turns is always the same. Each pickup sounds the same and the subtle differences between guitars are disappearing.

The design and materials of pickups are different these days, and if you want a truly authentic sound, you have to pay extra for them. The ones commonly found in mass-produced guitars have a rather generic sound that neither offends nor delights. The original pickups are really something special. 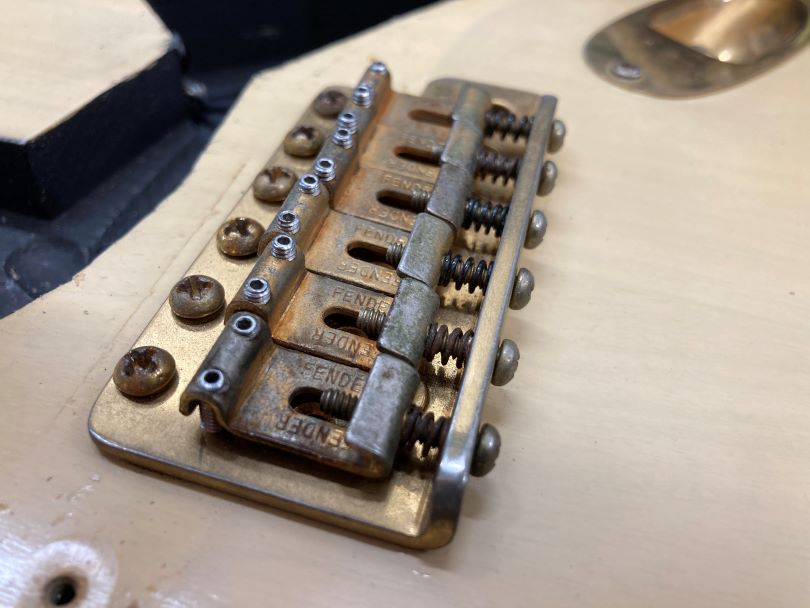 Switching the sound between pickups was revolutionary on the Stratocaster because it used three pickups. However, in the 1950s, the Stratocaster only had a three-position pickup switch, so there was one pickup per switch position and they could not be combined.

That didn't come until the late 1970s when Fender started making five-position switches, which remain the main choice to this day. You can always combine two pickups together, giving the Stratocaster an unmistakable sound.

And today, in addition to a regular five-position switch, we can put a Super Switch or Freeway Switch on a Stratocaster, for example. These switches offer a wide range of pickup wiring and combinations. I highly recommend it.

What made the Stratocaster a little revolutionary was its bridge and its capabilities. The use of the vibrato bar allowed for a whole new range of sounds. The pickguard was anchored in the body of the guitar by six screws. Nowadays, there are also more modern versions with only two pivots and a different design of the bridge saddles. Both choices are good, it depends more on personal preference.

Originally, the Stratocaster was produced only in a two-tone sunburst. Later, one colour was added, making the sunburst a three-tone colour. And gradually, other colour treatments began to take hold on the Stratocaster, even though they were laughed at by Fender's management at first.

The first colour finishes were identical to the US automotive colours. Therefore, if you had a pink Cadillac back then,  you could have had your Fender in the same colour.

Today, almost all kinds of colour combinations are possible, including metallic or sparkle lacquers.

The quality of the wood used has been much debated throughout Fender's existence. Certainly, better quality materials were used in the past, and the original Fenders prove this. In the golden era of Leo Fender up until the mid-1960s, Fender didn't make as many guitars as they did later. The emphasis was on quality over quantity. It wasn't yet a mass-produced guitar. Guitars maintained a high-quality standard. After CBS took over Fender, this declined considerably.

Nowadays, Fender keeps the bar still high and its products have high reliability, but compared to the original models, today's quality lags far behind. I've handled a lot of Fenders from the 60s and as a guitar technician, I wish today's Fenders had necks as good as they did back then. But unfortunately, I'm comparing the incomparable. Considering how many guitars Fender makes today and that they are mass-produced, the quality is still very high in all respects.

Tagy Under the hood Fender Stratocaster