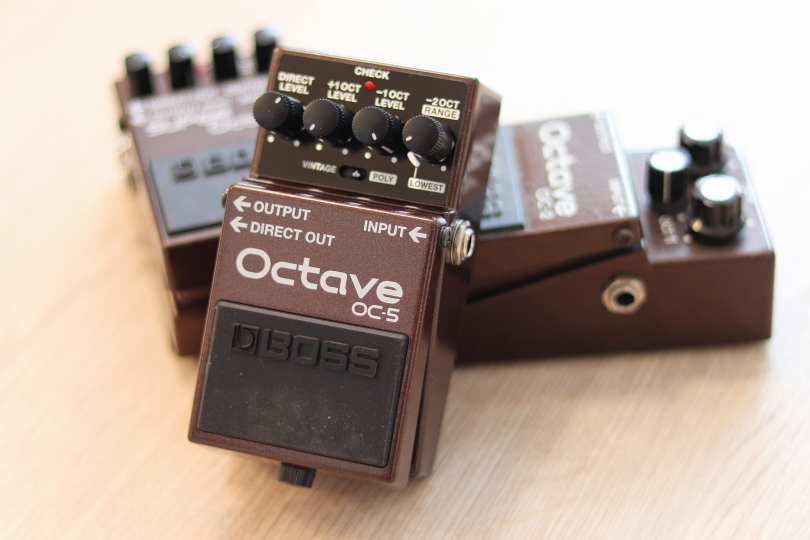 The updated Boss Octave definitely deserves its place in the collection of exceptional effects. It's the only pedal with selective octave polyphony, which may sound almost threatening, but that's why it has become a standard for solo fingerstyle or jazz guitarists.

Sooner or later, almost every guitarist performing solo (or even accompanying a solo instrument in a duo) wants to enrich his sound—already the ancient Romans knew that the bass makes the music ;) The seemingly simple assignment was not really feasible for many years until the miraculous "Super Octave pedal" came along.

The Boss OC-3 offered a split octave, which adds bass to the lower tones in a selectable range and leaves the rest of the upper tones unchanged. This clumsy description doesn't even begin to convey the fantastic benefit of getting a bass line added to our chords. Bassists have pretty much ignored this model and stuck with their ancient monophonic OC-2, but the entire fingerstyle community has enthusiastically incorporated the OC-3 into their pedalboards.

Based on the collected feedback, Boss introduced an improved version in late 2020, boldly skipping the next logical number in the series 2, 3 and going straight to 5. Some internet theories have entertained the idea that OC-2 + OC-3 = OC-5, but reality offers an even more interesting story. In Japan, the number 4 has unpleasant connotations associated with death, so there is, rather unsystematically, no four-letter marking in Boss.

However, this numerical leap really represents the technological advance between the two versions. The OC-5 offers an overall upgrade and, above all, better tone tracking, and is thus intended to be a fusion of the iconic OC-2 sound and the improved first polyphonic octave pedal OC-3. Fingerstyle superstar Mike Dawes isn't even afraid to use a provocative headline asking if this is the best pedal for acoustic guitarists.

He calls it an "octave pedal on steroids" because it's received some intense work; in addition to the aforementioned better tracking that most reviewers and users report. One input has been removed (there used to be two for guitar/bass on the OC-3) and replaced with one switch on the back, so there is no need to reconnect jacks. I would point out here that it depends on the tuning, and I usually plugged my baritone guitars into the Bass input. The label panel is much clearer (I'm not a big fan of the unattractive older designs) and the rotary knob with cues has been replaced by a much more logical Vintage/Poly switch. There is no distortion circuit, which hardly anyone seemed to use (it didn't appeal to me either), and instead, there is a +1 octave, so you can play in up to four octaves at once (-2/-1/0/+1). The upper octave is useful for solos or simulating a twelve-string guitar.

The vintage mode is intended to be a replica of the iconic OC-2 sound used by a generation of bassists. It's a monophonic octave pedal, so it's used for playing single-note lines. In the Poly mode, the previously mentioned magic happens, the octaves are also added in chords or harmonies. Of course, doesn’t necessarily make your music sound amazing, the playing has to be adapted a bit to the sound produced.

In addition to the familiar setting of the range in which the effect will play bass tones, the function Lowest  has been added, which allows the effect to evaluate the lowest tone in the harmony and add additional octaves only to that. This is excellent for a full chordal accompaniment.

Most people rate OC-5 as a great improvement in quality, although there are occasional comments that OC-3 was better. The following in-depth comparison with many examples of jazz walking bass performances may help you resolve this dilemma.

I had the relatively rare opportunity to compare all three versions side by side. Since I am not a bassist, I was not that impressed with the fully analogue OC-2. After all, the regularly questioned digital has come a long way since 1982. For guitar, the newer versions are definitely more convenient.

Visually, I found the OC-5 better than the OC-3 in terms of control and sound. An occasional complaint from acoustic players is that the octave pedal changes sound even when the pedal is off. That's why there's Direct Out, which keeps the main signal unchanged but requires a bit more complex wiring (loop or second-line wet/dry).

Generally, the newer version has less effect on the original sound. Of course, according to the laws of physics, there cannot be zero latency, but for these sub-bass sounds, this is not a problem. If you get a feel for the octave player, try out your personal settings, don't expect miracles and respect the possibilities of the effect when arranging, it can pay off in a dazzling way on the stage.

Not to be completely uncritical, I should mention that the current Boss paper box has always managed to annoy me when I was manipulating it. It's difficult to get into, the pedal is too tight in it and even though it's perfectly protected on five sides, there is only thin cardboard on the most sensitive, face side. The corporate department responsible didn't do a very good job of that. But it's just a cover. The content itself is excellent, exceptional and innovative. Once again, the BOSS has shown who the BOSS is. 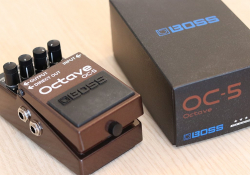 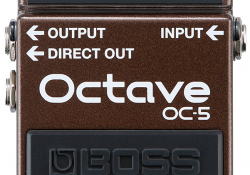 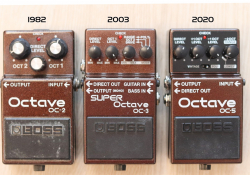