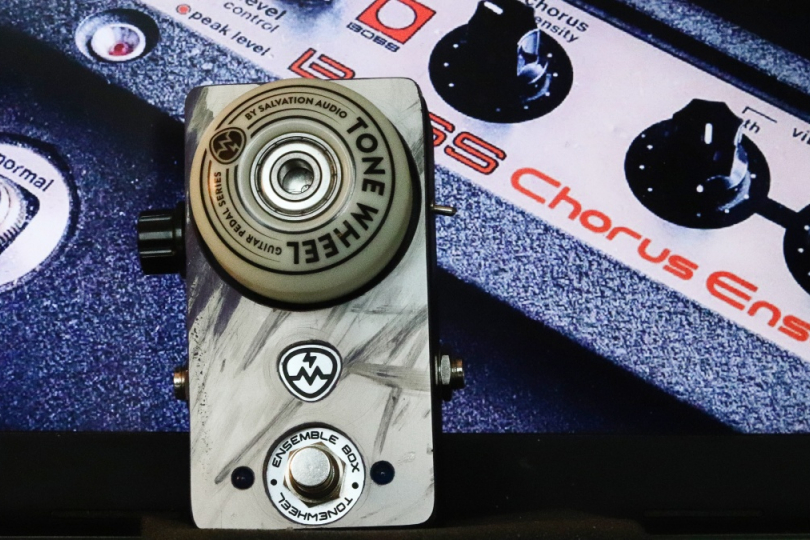 In my long search for the perfect sound, I have come across some interesting pieces that definitely deserve your attention. In the second part of our new series Pedalboard Gems, let's have a look at Salvation Audio's ToneWheel Ensemble Box: the modern reincarnation of an iconic pedal, often dubbed the "mother of all choruses," is unique in many ways.

The very first floor effect produced by the world-famous company Boss was the legendary CE-1 Chorus Ensemble, appreciated to this day for its three-dimensional, analog-like totally natural and strikingly recognizable sound. In 1975, it brought guitarists the popular chorus/vibrato of another legend, the Roland JC 120 combo, as a separate effect. Being one of the trailblazers of effects based on time manipulation, the CE-1 is based on groundbreaking BBD (bucket brigade device/drive/delay) technology–which, in miniaturized form, made possible what previously only mechanical methods of magnetic tape manipulation or bulky rotating Leslie cabinets could do.

That's why BBD chips immediately became the basis for many other choruses, delays and flangers. Although they were gradually replaced by digital effects, not only have they endured, but they are still the basis for high-end effects because of their undeniable sonic qualities.

Despite the nowadays barely acceptable size, weight, failure rate, and the necessity to have it in a true bypass loop so that it doesn't affect the signal, many guitarists still have it in their pedal boards because it simply sounds great and no modern effect has been able to replace it. Which is an irresistible challenge for some gear designers—to try and design an effect with a comparable sound that meets the high standards of today. And that's exactly what the Salvation Audio ToneWheel Ensemble Box is.

A small colorful box with a multi-layered story harbors a fully analog-like sound with many variations as used on essential recordings like "Black Hole Sun" (Soundgarden), "Welcome Home (Sanitarium)" (Metallica), "Paradise City" (Guns N' Roses) and "Every Breath You Take" (The Police). It's not just the circuitry of ToneWheel pedals that is perfectly engineered, but also every detail of the outer packaging—made from recycled parts of a used skateboard, like the board itself, and a wheel cleverly used as a foot switch which can also light up in the dark! Upon ordering, you hand-pick this specific part for a perfectly unique effect that no one else in the world has.

After the ToneWheel Boost, which is also found in the pedalboards of world-class guitarists, came the iconic chorus. For me, it's the epitome of 80s guitar sound, when it was abundantly present practically everywhere. The controls are ultra-simple: two potentiometers for speed and depth of the effect plus one mini chorus/vibrato mode switch. After years of experience with guitarists' requests, desires, and dreams, it was clear to Tony at Salvation Audio that if the wheel controlled the speed of the waveform, there would immediately be a large group who would want to use their foot to change the depth of the waveform in real time. This would essentially mean producing two effects, which would come with logistical complications, or making them purely to order, which in turn would mean longer turnaround times. That's why Tony invented a special switcher (it necessarily switches several things at once), in the form of a simple internal switch that you can use to assign either speed or depth to the wheel at will; a second potentiometer then automatically controls the other variable! Usually this is solved by a set of micro DIP switches, which, despite voluminous explanatory manuals, unfortunately brings never-ending questions about how this switching should be done, ultimately seasoned by the forgetfulness of us guitarists. Salvation Audio keeps it simple: Rate or Depth. Perfect, I applaud that.

Sonically, the Tonewheel Ensemble Box is perfectly true to its description: naturally analogue-like warm & lush with minimal noise and great headroom. At high speeds it approaches the "Leslie effect" of a rotating box. Dan Friml shows it all in detail in his video.

Those who are not fully satisfied with today's cheap mass production can try to delight all their senses with a unique handmade gem full of stories. Some famous guitarists have exchanged the practically irreplaceable original CE-1 in their pedalboards for the new "small yet great" ToneWheel Ensemble Box. Can you imagine better proof of quality?

What's more, the pedal has scored in a far more important way than mere noodling, as it was auctioned by well-known personalities of the Czech music scene and the proceeds went to the tornado victims in South Moravia. A beautiful example of when chorus extends beyond music. 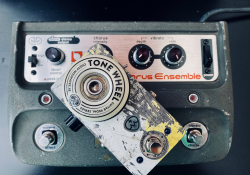 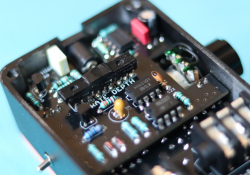 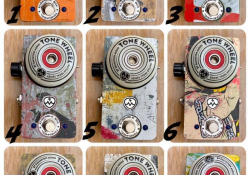