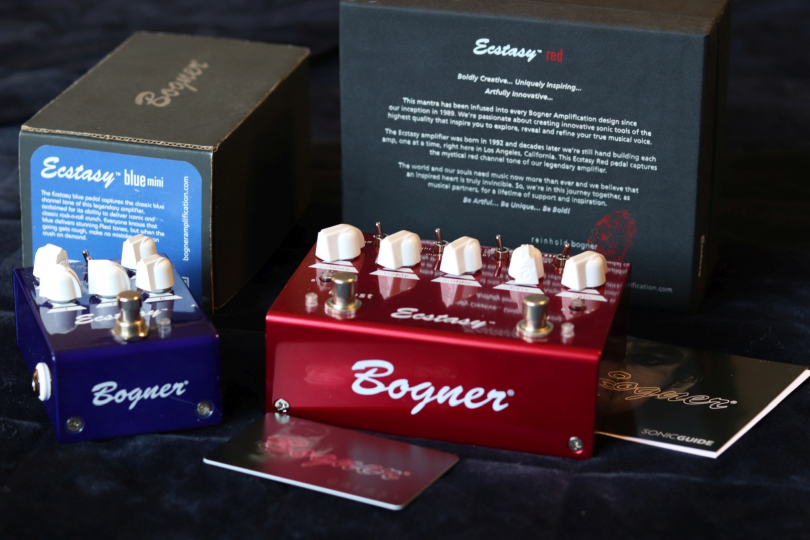 Bogners have noticeably shaken the market and contributed to the wave of increasingly fantastic effects we can choose from today.
Dr.Hyenik - Thu, December 23, 2021 - 08:00

A six-foot-tall eccentric with funny furry hats who makes high-end guitar amps—that’s the highly respected amp guru Reinhold Bogner. From heavy-duty high gain “beasts” through smaller heads, he’s worked his way up to effects, on which he imprinted his unbridled inventiveness and uncompromising demands for quality. The result is a series of ecstatic gems based on his legendary Bogner Ecstasy amplifier.

In his bio, Bogner writes that he comes from Ulm, Germany—the birthplace of the EL84 tube, which clearly predetermined his life path. But we have to consider his extraordinary sense of humor and exaggeration, so I don’t really believe that his first words were “Mullard” and “Brimar” or that he drank breast milk from the glass bulb of a KT88 tube. But the truth is that from a young age, Bogner lived surrounded by electrical parts in the workshop of his father, otherwise an engineer at Telefunken. Fascinated by the rock sound, he built his first amplifiers from available diagrams but had to improvise and replace parts due to a lack of the right components. And that was the real enlightenment because he was discovering spontaneously how changing a piece could dramatically change the amp’s sound, feel, and response.

Bogner longed for a broader application, so with a million ideas, a heavily modified JCM 800, and a few hundred dollars in his pocket, he flew to California. There, he hopped on a bus and headed to an apparatus rental shop in North Hollywood, where many musicians met. The local owner was impressed by the sonic possibilities of Bogner’s amplifier, which one Edward Van Halen then bought. So the bright career of a new star could take off in earnest.

And the bomb exploded with his very first amp—a three-channel Ecstasy 100B head, equipped with an astonishing number of different switches for fine-tuning the sound characteristics (expanded in later versions). Bogner thus literally combined an organic sound base with modern technology. Satisfied customers such as Jerry Cantrell (Alice In Chains), Vernon Reid (Living Colour), Steve Lukather (Toto), George Lynch (Dokken), and Steve Vai continued to spread the fame of the “Mad German”, who deservedly became one of the most respected guitar amp manufacturers.

About a decade ago, he decided to penetrate a new market and offered Red and Blue stompboxes—two channels of his flagship product, coming with completely insane promo photos... Geeky guy. My favorite YouTuber Pete Thorn, in his typically dazzling way, showcased them in the following video.

You get the effect in a luxurious black stompbox made of matte hard cardboard with embossed printing and an explanation that this is the red channel of the legendary amp. All complete with motivational challenges and a bloody (or so it seems) thumbprint of Reinhold. The rubber feet are enclosed in a neat little pouch. The warranty is an actual plastic card similar to the credit card—I’ve never seen that. The gorgeous red metallic of the box, with a flood of switches and knobs on white triangles, is exactly Bogner style—that is so that everyone can fine-tune their sound.

Of course, that would be pointless if the basic sound wasn’t OK. But would you expect something like this? Of course not. When you plug the stompbox into a clean preamp, you get the full-blooded sound of a vacuum tube, so you can turn your Fender combo into a roaring high-gain beast. That’s how the box is designed, after all: as a scaled-down, “mirrored” Bogner Ecstasy red channel—for clarity and dynamics something previously unheard of in overdrive/distortion pedals.

Which I fully endorse. The feeling of the resulting sound is definitely not “flat-box,” but instead well responsive to your playing and cleaning with the volume potentiometer on a guitar with sufficient headroom provided by the internal standard 9V voltage multiplier and typical articulate mids. Except that the Red pedal must be plugged into a clean channel or preamp. Of course, I also tried plugging it directly into an IR loader or a soundbox with speaker simulation, but the result was not that convincing. I still missed the highs, and the sound was noticeably flatter.

Using a range of mini switches—variac, mode, pre eq, and structure—familiar from the big head, you can fine-tune the desired frequency response, compression, and response. So you don’t have to rely solely on the obligatory gain with EQ. In addition, thanks to the smart boost with not only classic volume but also gain adjustable via illuminated mini potentiometers, you get two (even remotely) switchable distortion levels, which expands the effect’s possibilities even further, as you can have both accompaniment and solo sound of the same color.

With every touch, you’ll feel the uncompromising Bogner quality that Reinhold prides himself so much on. I even noticed that inputs seem to resist cheap interconnect cables and require quality jacks (apparently slightly different shaping). Bogner is so sure of his position that he doesn’t even provide any marketing cooperation (endorsing), so even the most prominent stars have to buy gear from him!

I have a personal relation to Bogner because a long-ago tryout of the Randall XTC interchangeable preamp module (which, as you might guess, is an anagram for Ecstasy) sparked in me a desire for this system, which I still play to this day. So I had the opportunity to compare the pedal to a Salvation Audio Xtacy miniaturized preamp, which I had compared to the original Bogner head in many test recordings, so I know the sound well. The three tubes in the module and the perfectly tuned circuit give a more convincing and spacious result, but the box stood up with honor even in this unequal battle.

Not to sing only praises, I have to add that I also tried a black Uberschall from the same series (based on the iconic heavy-duty head), but I wasn't so keen on it. And I was clearly not alone, as this model sold out some time ago with massive discounts. Ironically, the Uberschall's unique power amp has thus defied even the author himself, and despite numerous attempts by even modular designers, no other platform plays like this original amp for lovers of down-tune riffs. So for this type of sound, I have to settle for a module à la Diezel :) Last in the bunch of big two switch boxes is thus La Grange due to its old-school Plexi sound. The Blue pedal is actually perceived more as a Plexi of a more modern cut.

Bogners have noticeably shaken up the market and have participated in the wave of increasingly fantastic effects we can choose from today. However, even the exotic guru listens to his customers’ feedback, and after a couple of years he came up with the upgraded Red and Blue pedals with the most important and popular features, but in significantly smaller mini versions.

In the meantime, the Blue mini has permanently nestled in my pedalboard, so let’s take a closer look at it. The box has just the right size, is solid, quite heavy, and still gives the impression of quality components. Only the chosen shade of blue doesn’t please my eye too much. I like the beautiful light metallic of big Blue much better. However, it plays so well that I turned a blind eye.

It’s especially great in the lower gains up to AC/DC hot crunch and gets along well with single-coil pickups. The recommendation remains to plug into a clean preamp/channel. In another case, I kept turning the highs to the max. But the EQs are perfectly seated and behave like tube amps, and, moreover, you also have the option to adjust the frequency range of the mids with the trimmer. However, where the Blue mini reigns supreme is in the bass, a common weakness of stompboxes. Here they are perfectly articulated, not overdone, not overblown, and I enjoy their energetic pumping to the fullest even in headphones.

Compared to the blue channel of the tube preamp, I even preferred the stompbox a little bit. It’s an inspiring, colorful sound that you enjoy playing. Once, when I just wanted to give something a quick try (before the football started), I found myself droning on for half an hour and the game being long underway. That addictive this sound can be. Recently, I needed to imitate the sound of Zeppelin, AC/DC, and Ozzy again for a special event. Blue mini provided them for me by simply switching the L/M/H gain level.

The packaging is simpler than with its larger siblings, but with exceptional details such as the square cutout in the foam that houses the rubber feet plate.

For the other pedals, Reinhold Bogner collaborated with the greatest audio legend, Ruppert Neve. But more about them some other time. In the meantime, you can try being as brazenly creative, uniquely inspiring, and artfully innovative with Bogner Ecstasy effects as their author. 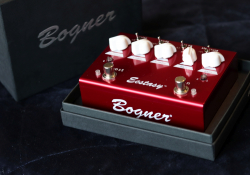 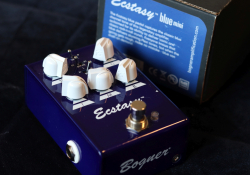 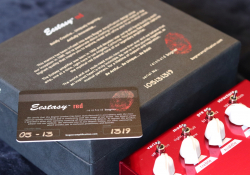