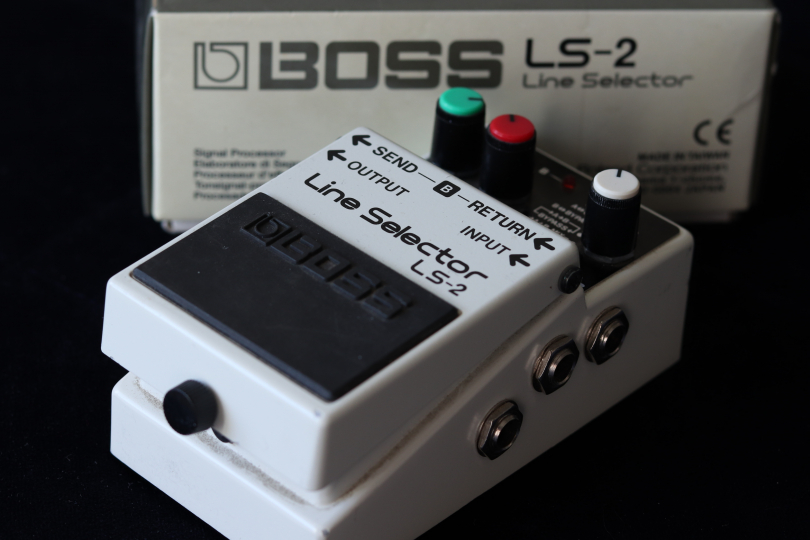 A guitarist cannot live by sound alone. The sound must also be controlled, switched on and off, split, or combined in some way. One such somewhat hidden tip that can help us is the Boss Line Selector, which has long offered a wealth of possibilities for guitarists and bassists alike.

It appeared back in 1991 and since then it has been proving its unchanged qualities even in today's totally turbulent times. I've tried to find an equivalent, by the way, but without much success. One would need several stompboxes to do the same as Boss—which makes it unique in its own way. So what can it do?

A lot of things, which is why it is even difficult to give it an exact definition, and everyone understands its purpose in their own way. I deliberately made a mini poll among my colleagues who use it—one understands it as an A/B signal switch, for another it's a two-channel mini mixer, some use it as a dual booster, others as a signal splitter or mixer, and for bass players it's a parallel looper for mixing effects. Simply a hidden gem—Boss LS-2.

With the rotary switch, you can choose between six modes, thoroughly described and detailed in the manual. There are three inputs and three outputs plus two loop lines with their own volume. In the following video, you can see real wiring examples.

Sure, we're still referring to the manual, but how can the line selector be used in real life? A/B switching is probably the first thing that comes to one's mind, also because it's the very first mode. But here's where it starts to get tricky because the "A/B" can either mean two different loops (e.g. accompaniment and solo with various effects in one stamp) or switching one guitar to two different amps.

This is perfect for hybrid guitarists when, for example, the signal from the magnetic pickups can go into a tube amp and the acoustic sound into an acoustic combo or active monitor, as one of my friends playing the hybrid guitar reported—completely free of cracks and hum, which is a small miracle. Anyone who has ever tried similarly complex combinations has probably had their hard times. And Boss's little stompbox offers a recipe for that.

Furthermore, we can have two instruments with different volume settings (depending on pickup strength or style), which is often used by bass players, one being a basic instrument and another used for slapping or fretless bass without having to reconnect cables, mute the amp, or equalize volumes.

And there's another option of having just one instrument with different volumes for accompaniment and solo—or one output for silent tuning. Are you keeping track? And we're still only in the first mode!

Other modes combine loops with bypass even by cycling the three A/B/bypass options in the fourth position of the switch. I'll skip now to the sixth position, called output select, which allows you to connect up to three different amps and switch between them. The most magical position, however, is position five (A+B MIX Bypass), as this allows you to get parallel loops with their own levels. Which, saying that, doesn't sound very sexy, but the bassist of the mega-successful Royal Blood would explain it better (that is, if he wasn't carefully hiding how he achieves his super-sexy sounds). For a distorted bass, it's crucial to be able to just add distortion while keeping the original sound at the same time. Without that, it's usually rather an annoying buzz than the desired aggressive rumble. The next video will show how to proceed in this already a bit more sophisticated wiring.

In addition, the fifth position allows mixing signals into a single output, which I used to do to get along with only one monitor for two different paths.

And there are more magic tricks. I read in one review that the LS2 provides 16 different connections. This is not true, because while recording we discovered yet another secret (?) way that is not mentioned anywhere in the manuals or commented on in the discussions. We needed to connect the guitar to two simultaneously playing amps, the so-called AYB. For this, of course, one uses specialized stompboxes (a simple passive Y cable or similar adaptors often don't work without humming, and degrade the sound). After some experimentation, we figured it out. We saved money on a one-time purchase of extra equipment and Boss reaffirmed its leading role in the history of stompboxes. And have I actually mentioned powering other stompboxes?

One Italian video is called "1000 ways to use the LS-2". I don't think there are that many, but as you can see, there are plenty. And maybe you'll discover some more unconventional methods.

I have to thank Tony Salvo http://salvationaudio.com/ here for reminding me of the LS2 because I too had forgotten a bit about this magical Cinderella. The line selector does not limit one's creativity, quite the opposite. It helps one to solve, with a single stompbox, many of the hardships and problems that musicians have to face on stage and in the studio. 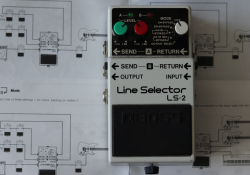 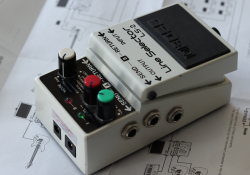 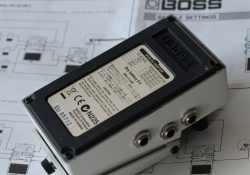