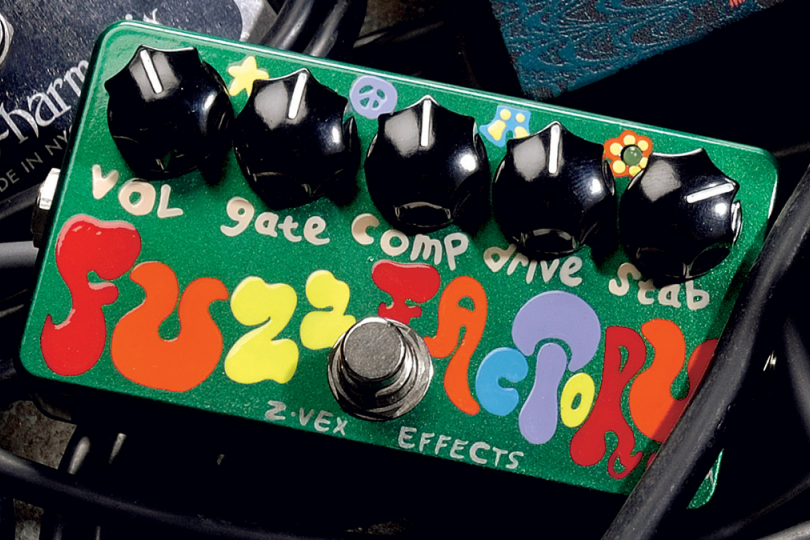 Another cult effect that created a whole new category of fuzz in its time, this gem definitely deserves its place in our gallery. Recently, the Fuzz Factory celebrated its 25th anniversary, and in that time, a surprising number of different variations have made their appearance. What better testimony to the universal popularity and attention-grabbing appeal of this extremely entertaining oscillating inferno?

It's hard to believe today, but the beginning of this oscillocult was not at all smooth. Quite the contrary. Starting engineer Zachary Vex did achieve local success with his first Octane effect, but local demand soon became saturated and the owner of the music shop (where he went to sell his boxes) wanted something else. So Mr. Vex sat down at his desk and, because he had just acquired a bunch of germanium transistors on the cheap, started experimenting with a classic fuzz face.

It still wasn't quite right, until he came up with the idea to put a booster in front of the fuzz circuit—and that's when a legend was born. The wiring began to beep and whistle wildly in response to the knob being turned. He even brought the Stab(ility) function, which he originally had only on the internal switch, to the potentiometer as well and got a revolutionary fuzz turned 90° to fit all five controls. Despite the conservative belief that no one needs a box with that many controls, the beta testers had a lot of fun fiddling with all of them and finding the craziest sounds in the plethora of options. But even so, only a few units were sold in the first year and it certainly didn't seem like a breakthrough. It wasn't until Joe Gore (guitarist for PJ Harvey and editor of Guitar Player magazine) wrote a review that sparked unprecedented interest in the Fuzz Factory. It became the best selling ZVEX effect ever, as the following animated video summary beautifully shows.

You'll see FF in the arsenal of such stars as Jack White (The White Stripes), Trent Reznor (NIN), and J Mascis (Dinosaur Jr.), and more than twenty other effects complete the offering, some of which have also become groundbreaking legends—such as the SuperHardOn booster or the "Marshall in a box" distortion Box Of Rock.

In the meantime, of course, other representatives of this wild oscillating noise segment have appeared, such as the Death By Audio Supersonic Fuzz Gun, the Red Witch Pedals Fuzz God (currently in version IV), the Devi Ever: FX Truly Beautiful Disaster, or the Zoom UF-01 Ultra Fuzz dubbed " the poor man's Fuzz Factory ", which at the time went for $50 on eBay and which I foolishly didn't get at the time, because even with its poorer availability, prices are now many times higher.

The most characteristic promoter of the Fuzz Factory is of course Matt Bellamy (Muse), who has the effect built directly into his guitars. In fact, the biggest advantage and fun is the fantastic interaction of the potentiometers and volume pot on the guitar directly while playing. He wants to keep the pots handy, as that allows him to conjure up an incredibly varied range of musical sounds and noises. You can find tutorials, setup lists, or presets online that describe specific knob rotations (using clock hands or a 1-10 scale) with exciting names like Dying Fuzz, Thick Crackle, Modulated Crazy, Rough Velcro, or Fizzy Fuzz. It's quite tempting to give it a try :). An ancient demonstration by the author himself explaining the basic manipulation of the controllers will also help.

It should come as no surprise that you'll come across different versions of the company name:  ZVEX, Z.VEX, ZVex, Z Vex, and Zvex Effects. Zachary Vex uses it very freely and spices it up with his sense of humor. Hand-painted boxes, often in limited or unique designs, have become the most typical feature of Zvex. I confess that I am not a fan of these often infantile paintings, but time has done the author justice—it has become a welcome marketing differentiator and a standout in today's overflow of other manufacturers.

In the quarter century of the FF's existence, a surprising number of other variations have also appeared. So in addition to the hand-painted classic Made in USA, you can also get a cheaper Vexter version with printing. The interior with the same components is identical, but assembled in Taiwan. Of course, to the germanium FF there is also a sharper silicon one and also the so called Fat Fuzz Factory with deep oscillation; or Reverse FF with special reversed-polarity transistors (and corresponding reverse printing); or the mighty Fuzz Factory 7 with a rotary switch expanding the sonic territories (and the Russian 7 variant with Russian transistors); or the FF vertical with pitch orientation more suitable for today's crowded pedalboards; all the way to limited editions such as the Clear FF in a transparent box or the so-called Inventobox allowing you to try your inventiveness with different components and circuits without soldering (which includes FF and the already mentioned SHO booster in the starting lineup. In fact, Fuzz Factory has made its way from the guitar niche into the world of universal studio effects in the form of the Eurorack module.

Totally wild is the Fuzz Probe, its famous manual starting with the words:  "Congratulations! You must be crazy. Even I have no idea how to use this pedal." The combination of theremin with fuzz factory and (non)touch controls is really something and never ceases to amaze me. The dazzling Bliss Factory was created in a 1000-piece limited edition (despite the not-so-low price, it soon sold out), on which I counted up to 26 controllers and switches! Where are the days when "nobody wanted a fuzz with five?"

Because of its relative simplicity, the FF has also become a popular DIY project, so you may come across another flood of different clones in all price ranges. I myself own one with an upgraded bass cut input, which allows you to trim the bass entering the distortion circuit, thus greatly expanding the capabilities of the classic FF especially for playing chords and rhythm. In the following demonstration, I tested what sounds (quite faithfully resembling almost human screams) can be twisted by combining the controls and volume on the guitar.

In fact, even the digital simulation of the fuzz factory in Line6's Helix multi-effect series is unexpectedly well done. In the Industrial Fuzz preset, you can program each control including its ranges to a foot pedal; and when you add a volume pedal to the effects chain, you can conveniently control all the foot manipulations, catapulting your noise-making into a whole new dimension.

So don't be afraid to experiment and try any FF variation for its noisy appeal. The Fuzz Factory will welcome your inventiveness with wide open furry arms. All You Need Is Fuzz! 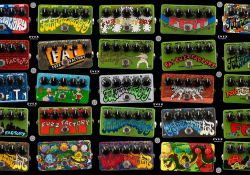 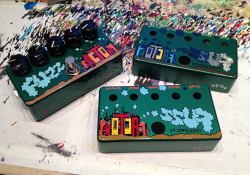 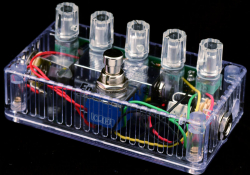 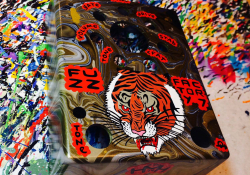 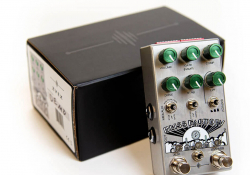 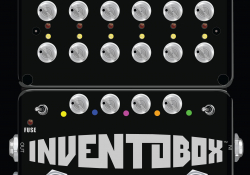 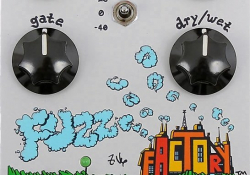 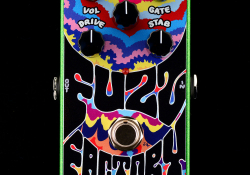 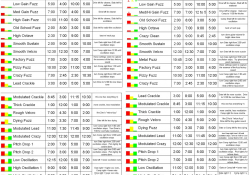