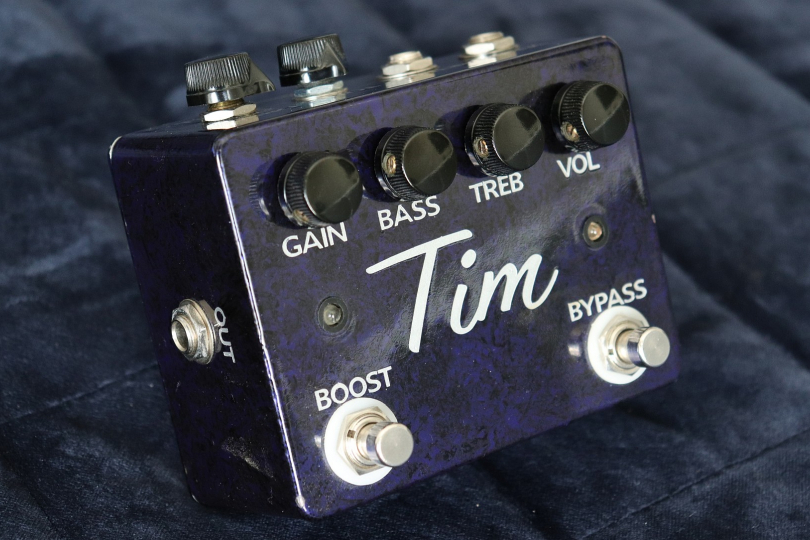 Tim/Timmy is deservedly one of the most used, most talked about, and most copied pedals for connoisseurs who want to fine-tune their sound | Photo: Dr. Hyenik
Dr.Hyenik - Thu, November 25, 2021 - 08:00

Underneath that short and un-Googleable name is another ultimate effect pedal cult that fits perfectly into our Pedalboard Gems series. Paul Cochrane's Tim Overdrive is in fact considered to have probably been the first boutique transparent distortion effect, and as we'll discover next, its story is a rather unusual one in the effects world.

From the beginning, it was like a secret cult spread only by whispers, because the only contact to Paul Cochrane was through his hard-to-find phone number. Still, Cochrane couldn't keep up with production, and people had to wait many months for the pedals they had ordered. In fact, Tim quickly gained a legendary reputation, and moreover, for a handmade pedal it was more than reasonably priced. Gradually, an email address and myspace profile were added—but in the words of his memoirist,  this only made it perfectly clear how far behind Paul C was on deliveries. Nowadays, he has a facebook profile, but nothing much happens there, so he persists in his difficult to understand concealment from the world.

Even the all-knowing internet is very short on words in his case. I've only come across a few scattered scraps and a single interview. Of course it is Cochrane's strategy, quite different from the usual furious promotion in every possible and impossible way, that so clearly shows his exceptional approach and attitude. The effect's ambiguous name also contributes to this, as nowhere is it clearly defined whether the box is called Paul Cochrane Tim Overdrive or Paul C Audio Tim or just plain Tim, which makes searching even more complicated. However, this does not change its prestigious position in the transparent overdrive segment and the legendary Tim/Timmy. In fact, Cochrane produced only two pedals: the big Tim and its younger, smaller brother, the Timmy, successively in several versions with added details such as a clipping switch or a larger supply voltage range. The latest so far is the Timmy V3 and the following video is a comparison with the original big Tim V1.

One of the original 2004 Tims fell into my lap, so I was able to try out the cleverly devised controls using bass before distortion (which can clean up the bottom end perfectly) and treble after distortion (to conveniently smooth out the final sound). The potentiometers function as cut (similar to Vox amps), which isn't exactly common in boxes. It even fooled one YouTuber, who disposed of the first piece as a dud, and only the second time around did he discover—instructed by a colleague on the proper functioning of the controls—the irresistible "timmy" charm, which he documents in a video where he passes it off as the best overdrive of all time.

The humorous inspiration for the name was Tim the Enchanter from Monty Python. Paul Cochrane originally designed Tim specifically for himself, being a fan of AC/DC riffs and Eric Johnson solos. He wanted to give a clean boost to his Marshall Plexi Super Bass to approximate a Marshall Super Lead, and at the time, no clean boost with higher gain options existed. So he designed it himself to get the warm, woody solo sound of his stratocaster's neck pickup without any significant changes when switching to a bridge pickup. It turned out he had hit a hole in the market—because such an effect, sometimes aptly nicknamed a "more pedal" (preserving the original character of the amp but adding more of everything), immediately appealed to a wide range of guitarists. Paul is proud that members of his favorite band Rush, for example, have used it on recordings. After feedback from guitarists, he came up with a scaled down version of the Timmy (without the boost section) but by doing so he "boosted" the transparent overdrive segment even more.

Note: Just to be safe, I looked up the definition in the fantastic book Pedal Crush and refreshed myself that "transparent" actually means non-transparent, because bass has a stronger effect on the amp than other frequencies—so when the bass is appropriately cut for clarity, it gives the impression of transparency :)

The wiring is quite simple, so of course a number of both admittedly inspired and unacknowledged clones and other variations in all price ranges emerged: Jan Ray Vemuram, Caline Pure Sky, Lovepedal Amp11, EHX Crayon, JHS Morning Glory, and DOD Looking Glass. The placement of the controls and the blue color can be a hint. But here again, Paul C's exceptionalism kicked in as he even encouraged and advised the DIY community in experimenting with his wiring. Only a larger company has been forced by public opinion to replace the shameless copy of the Danelectro CTO V1 with a modified V2 to make it less blatant.

However, we also have the option of using the authorized Dunlop MXR CSP027 Timmy Overdrive version that Paul Cochrane helped design for mass production of the miniaturized variation. The following video shows the comparison with his official V3.

When I plugged Tim into the tube preamp, I tried both its completely clean boost with the bass/treble pulled back, as well as a slight boost and higher gain—and everything was perfect. Like the commenting guitarists, I also thought the added boost section and Tim's effects loop was not essential and a smaller Timmy version would have been fine. In fact, the pedal works great with other boxes, so anything can boost it. What still remains is the excellent guitar's volume response, dynamics responding naturally to strumming intensity, and the ability to fine-tune the level of saturation of your basic sound. And that's without the not-always-desirable midrange lift typical of a tubescreamer. Tim is in the same category as the Klon Centaur, and works similarly, only with significantly more options for customization to your particular instrument. The pre-bass control has always been a major gear design discovery for me. Especially for distorted rhythm playing, which is then not overwhelmed by excessive bass—these are in turn desirable for cleaner sounds. And since feelings are hard to convey, I tried to capture Tim's magic in a short sample.

The Tim/Timmy is deservedly one of the most used, most talked about, and most copied pedals for connoisseurs who want to fine-tune their sound. I'll admit that I never really wanted one until I gave it a proper try now. Now I'm looking at which one to get. Give it a try, maybe its charms will enchant you, too. 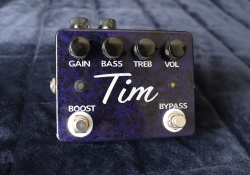 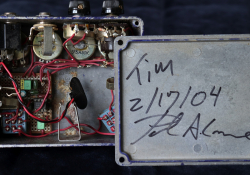 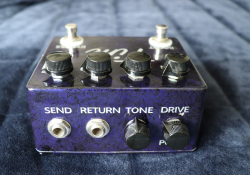